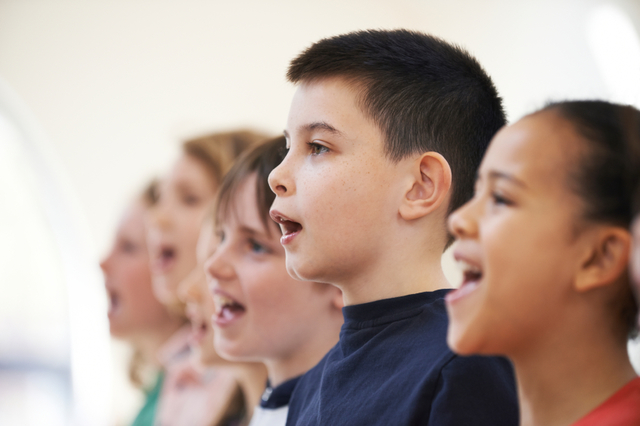 Being “called into the office” is always a little frightening. I was serving as the Music Chairman for the Primary General Board when my advisor, first counselor Virginia Cannon, asked to see me in her office. She explained the wonderful and overwhelming opportunity we were going to have to prepare a new children’s songbook.

Our assignment was to consolidate the four orange songbooks and other then-current resources under one cover and to simplify the music for less-experienced pianists. I left the office in a daze and knew my life was about to be consumed by this project.

Luckily my husband and children were very supportive and this assignment gave them a chance to learn how to do their own laundry and bake their own cookies. I reminded them that we were in this life to learn and to grow, and while they were having “mission prep” I was having my own growing pains.

The following five years were filled with difficult, exhausting, exhilarating, and spiritually rewarding experiences. I often referred to this project as my “seventh child”—the one with the longest and most difficult labor. Here are some little-known facts about how the 1989 Children’s Songbook was born, and how some of the songs were created.

There are 255 songs and 13 preludes included in the 1989 Children’s Songbook.

That makes a total of 268 songs written by 199 authors and composers, with 144 identified as LDS in their credit line.

The selection process for these songs was extensive and involved music leaders throughout the Church.

Songs were selected in part through a survey filled out by random Primary music leaders throughout the Church. This survey included 420 songs from lesson manuals, the Friend magazine, songs printed in the yearly Children’s Sacrament Meeting Presentation booklet, and songs from the four orange songbooks for leaders: Sing With Me, Activity Songs and Verses, More Songs for Children, Supplement to More Songs for Children. The songs were scrutinized by the General Music Committee, the Primary Music Committee, and an Ad hoc committee of current stake and ward music leaders. The General Primary Presidency also reviewed every song and made suggestions. This means that every song within the Primary songbook received the approval of children and music leaders, survived correlation and editing (to make sure it reflected correct doctrine), and passed through the four voting committees. In short, it was an honor to have a song included in the book.

Only 17 of the songs were considered “new,” and many of them have remarkable stories behind them.

These songs were selected or written because of a topical need. For example, the former songbooks didn’t contain a song about the pre-existence. I was acquainted with Janeen Brady through the Utah Composer’s Guild and had enjoyed her children’s songs with my family. I called her and asked if she had ever written anything about heaven. She said she actually had composed, but never published, a song to help explain the plan of salvation to her mentally disabled daughter. She allowed us to use her sweet song, “I Lived in Heaven.” It is the second song in the Heavenly Father section. I felt grateful that through a friendship and a prompting, the children of the Church would have a song to sing about the pre-existence.

Similarly, Carmen Pingree served on the Primary General Board over Special Needs. She wondered if there could be a song to help special needs children feel included. We thought about a possible message knowing that when you ask someone to write a song you never know if you will get a “winner.” We sent a draft of our brainstorming to Carol Lynn Pearson in Walnut Creek, California and asked if she would try her hand at crafting a poem.

She captured the message perfectly in “I’ll Walk With You.” Carmen suggested we ask Reid Nibley, a classical pianist, to write the music. He had a handicapped child and would be sensitive to the topic.  Brother Nibley made a lovely melody with a complicated accompaniment that sounded like walking. It was a little tricky to play, and so we simplified the left hand. When asking his approval, he said that our revision is what he should have written. This song adds so much to our current Primary songbook. It teaches us how to be a friend to those who are different than we are, and to love everyone as Jesus did.

With previous success adding verses to “Book of Mormon Stories,” we thought it might be worthwhile to have a song about Old Testament stories. We imagined a Jewish flavor—like Fiddler on the Roof—and a memorable chorus with the main message (the “hook”) of the song. After deciding on the prophets to be included, Duane Hiatt was asked to create the song. Brother Hiatt performed musical comedy professionally with The Three D’s and recorded for Capitol Records. He sang and played his guitar for nine verses with a catchy chorus for his song, “Follow the Prophet.” The title was inspired by a pioneer ancestor who kept his eye focused on the prophet’s wagon as he followed him on the trail.

This is definitely one of the favorites of children today!

Seven songs are in both the hymnbook and the Children’s Songbook—all of which had to be altered.

It is the policy of the Church that the same material should not be published in more than one resource. That meant the Primary songs in the Hymnbook could not be included in the children’s collection. The solution to this problem was to change the songs in some way for the songbook. “I Am a Child of God” is now in the key of C rather than D, has a beautiful obbligato for voice or instrument, and has an added fourth verse. The Primary office had received calls requesting the words recently written by the author, Naomi Randall. It was nice to add “celestial” to the vocabulary of the book by including the new verse.

Barbara McConochie said she was happy for the chance to add a verse to“Keep the Commandments.”  She wanted to include the idea that we must be tested even though we are keeping the commandments. The Children’s Songbook has her second verse and also an obbligato. Interestingly, when she delivered her revision, she also brought a birthday round she had been asked to write for the children of her stake. It was titled “You’ve Had a Birthday” and was delightful. However, all the songs had been selected and we were working on the layout of the book.  We had planned to use the traditional “Happy Birthday to You” which had been in the nursery manual.

There were no copyright contracts previously on Primary songs, and so we were negotiating for the use of every song. We found that the owners of “Happy Birthday to You” were requiring a substantial fee, which would need to be paid with each edition of the book. We decided that we didn’t really need that song since it is usually sung a cappella spontaneously.

But then what should we do with an empty space the size of a two-line song?  Sister McConochie’s birthday round was two lines long exactly. It seemed like more than a coincidence that she shared it exactly when she did. Experiences like this happened often and confirmed to me that Heavenly Father was guiding the preparation of this songbook.

I wish every child in the world could grow up singing Primary songs! Think of the positive power that comes from singing “I know who I am,” “I am a child of God,” “my Heavenly Father loves me,” “He wants me to be happy,” and “I want to be the best I can and live with God again.” Michael Moody, the General Church Music Chairman, said:

“It is like therapy and truth looping through our minds and becoming laminated to our souls.”

We have come a long way from the “Toothbug Song” and “Jolly Old St. Nicholas,” which were favorites from the 1904 Deseret Sunday School Union songbook. Primary songs have evolved from borrowed hymns and folk tunes to memorable melodies teaching LDS doctrine. There are many secret moments of joy for me as I hear the songs sung at baptisms and funerals, or expanded by the Mormon Tabernacle choir. I feel that this songbook “child” is definitely accomplishing its purpose. The children of today are like the army of Helaman—they have been well-taught and strengthened in their youth by singing Primary songs.