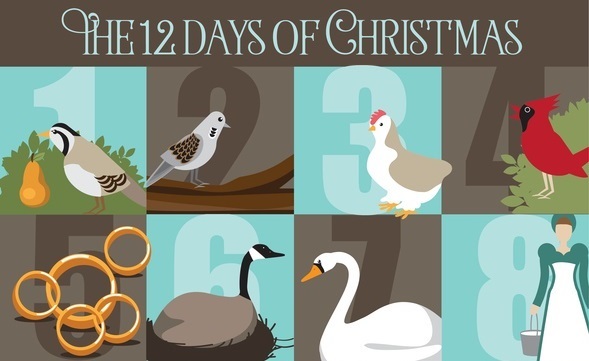 One of our family’s favorite legends is the explanation of how “The Twelve Days of Christmas” may have been composed. The legend says that in 16th-century England, wicked leaders prevented many Christians from practicing their religion. During that period, a royal decree forced those who did not embrace a particular religious ideology to take their worship into hiding. Violation of the laws of the time could result in severe punishment, even death.

But these persecuted, humble followers of Christ are believed to have found a secret way to express their adoration for our Savior. By carefully hiding doctrinal teaching in cleverly crafted, seemingly harmless lyrics, they could conceal a coded message of their belief and faith. So the “true love” in the song is actually thought to be Christ, who provides all that is essential in this life for His faithful followers. And the twelve days of Christmas are the days between Christmas and Epiphany, the day when the Magi, according to legend, are believed to have found the Christ Child.

For most people, “The Twelve Days of Christmas” is a silly song that simply mentions a series of extravagant gifts that a lovesick man or woman gives to his or her beloved at Christmastime. However, when you seek Christ, even this amusing little Christmas song can transform into a stunning, symbolic message and testimony of the Savior.

A Partridge in a Pear Tree

The mother partridge is known for her selfless sacrifice. When confronted with a mortal enemy, the mother bird will quickly sacrifice herself and protect her chicks by luring the enemy away. Think of Jesus and His selfless sacrifice to save us from sin and death. If the partridge represents Jesus, the pear tree must certainly represent the cross on which he hung. In the song’s very first gift, we can discern the voluntary, atoning sacrifice of our Lord.

This once-expensive item represents food fit for a king. The three French hens may remind us of the very expensive gifts that the Magi provided for the Christ Child: gold, frankincense, and myrrh. Just as the Magi offered Christ their best, most expensive gifts, the song can remind us that we too should give our very best, most valuable gifts to serve and honor Christ.

Birds use their God-given voices to call out warnings that will save the lives of their families and friends. The four calling birds in the song may represent the four Gospel writers that continually call us to the safety and protection we find in being faithful followers of Christ. Matthew, Mark, Luke, and John call out their warning for all to come unto Christ.