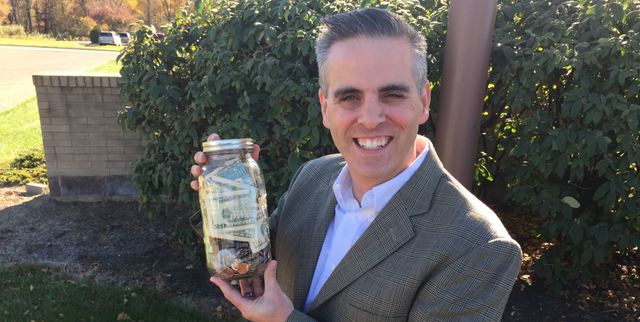 The following story is being shared in celebration of the release of the new Christmas Jars movie. It was originally published in 2015.

I have no idea where the time went.

Somehow, when I wasn’t looking, the Christmas Jar movement grew from an infant into a sassy pre-teen.

Yes, Christmas Jars and the tradition of anonymously giving away jars of slowly-accumulated change is celebrating its 14th birthday and the release of a movie adaption of the book. The tiny novella no one but Shadow Mountain wanted to publish first hit shelves in 2005 and sparked years of giving no one ever predicted.

We’ve seen pickle, peanut butter, jelly, and jam jars grow coin by coin until they amount to hundreds, even thousand of dollars.

People who know math better than I do — which includes everyone reading this column, all children and most pets — estimate the global Christmas Jars family gave away nearly $10 million in clean quarters and dirty dimes in the first 10 years.

That’s a lot of couch cushion and cup holder change.

We’ve seen lives transformed forever by the miracle of the right jar going to the right family at the right time.

We’ve seen prayers answered by a knock at the door at the very moment hope was hanging by a silver piece of tiny, tired tinsel.

We’ve seen children smile and parents cry when those rehearsed conversations about Santa getting lost never had to happen.

We’ve witnessed it all.

Everything, that is, save a stolen Christmas Jar.

Then, on September 27, 2015, we had to change the figurative sign. “Days since a stolen Christmas Jar? Zero.”

On that Tuesday evening in Dover, Ohio, a man walked into the public library and strolled out with a large community Christmas Jar containing an estimated $1,000 meant for a local needy family. Surveillance cameras captured it all, and soon social media did its wildfire thing.

The suspect, clearly identifiable in the footage, returned a portion of the money in the night drop box with an apology note, but the damage was done and before long, he was in custody and stories were emerging about his past, his present, and his uncertain future.

I heard about the theft the very next morning from Laurie Paisley, my director of events and a woman responsible for giving away or placing nearly 2,000 jars since first reading the book.

Within hours, Paisley and I launched a GoFundMe campaign to replenish the jar and ensure that the needy family in Dover wouldn’t go without. Friends and fans stepped up and we easily cleared our goal.

With the digital jar filling, I decided to reach out by phone to the accused thief’s family. I spoke several times and at length with his wonderful grandmother. Through persistent tears, she painted a picture of her grandson’s troubled life. She also revealed that his girlfriend was pregnant, fed-up, and embarrassed beyond belief.

One morning, pondering the spirit of the Christmas Jar movement and the countless stories we’ve received through the years, I received a spiritual answer to a question I hadn’t even asked yet.

Faster than it takes for a quarter to hit the bottom of a freshly scrubbed Mason jar, I realized I was heading to Ohio. At the very least, or perhaps most, I wanted to sit with him for a few minutes and explain the origin of the tradition, share some of the inspiring miracles of the last decade, and help him understand when you steal a jar, you’re not stealing money.

Meanwhile, the story went from a local-interest piece in Dover to making appearances in newspapers and on television stations around the world. Everyone wanted to know what I’d say to the alleged thief when I visited him in jail and whether or not he’d even see me.

The librarians, of course, were thrilled with my pending visit and personal delivery of the replacement jar. The local middle and high schools became involved, too, and our team arranged to spend a day at each school speaking and teaching workshops and writing, friendship, and service.

The fine folks that run the Tuscarawas County Jail were accommodating but not optimistic. They’d seen Justin Litman before, they said, and many others like him. “Don’t get your hopes up,” one of them told me on the phone when the visit was approved and scheduled. He added that if I was expecting an inspiring change of heart, I was going to be disappointed.

On October 26, 2015, I made the 300-mile drive to Dover and spent many of those miles imagining my meeting with Litman. What would I say? How would I answer his questions? Why had I come? “No, really,” he might press, “why have you come?”

Upon arrival, I visited briefly with an NBC crew from Cleveland in the parking lot and jail lobby before checking in at the wide, bulletproof window.

Twice a guard went back to let him know I was there.

Back outside, I reflected with the reporter on the distance, drive, and disappointment. Was I sorry I’d come? Was I embarrassed he wouldn’t see me? Did I have a message for him?

Of course, I had no regrets. I wanted Litman to know that the Christmas Jars community is one of the most forgiving family in the world. We love him. We root for him. If he changes his mind, I’ll drive right back to the prison from the hotel, library, or from my driveway in Virginia.

Despite the disappointment, my time in Dover was fantastic. I appeared on radio and TV and chatted with Lee Morrison, the Times reporter writer who’d provided wonderful coverage of the story since it broke.

Most importantly, I met with 1,500 super students who were easily among the most respectful and engaging I’ve ever worked with.

Finally, Jim Gill, the fabulous library director and his entire team, were gracious and accommodating.

Before leaving town, Litman’s grandmother called me to report she’d spoken to her grandson and he wanted to apologize for turning me away. “He just feels so guilty and embarrassed,” she said. There are things everyone would love to be remembered for; stealing a community Christmas Jar isn’t one of them.

I expressed my gratitude to this good woman for her efforts and promised to keep in touch. I invited her to read the book I’d signed for her and to present her grandson with his own copy upon his release. (Jail policy prohibits anything but the Bible. I told them the book was good, but not that good. I laughed; they did not.)

Fifty hours after rolling into town, I said goodbye to the community I’d fallen for and began the long trek home. Once again, the hours and miles gave me a chance to imagine what I’d say to Litman. Only this time, I was talking to the rearview mirror.

If I could sit in a cold steel chair across from the man accused of stealing that jar, I would tell him that forgiveness on the part of both the Dover and Christmas Jars communities isn’t optional. It’s required.

With clumsy words and clunky phrases, I would have explained that this life, down to every single minute of every single day, presents a second chance. Why let yesterday define tomorrow?

It’s a new sunrise, a new set of hours, and a new menu of choices.

Neighbors, wardens, and strangers on the street don’t get to determine his destiny. That right is divinely his, mine, and yours.

As I said goodbye, I would look him in the eye, and knowing my DNA, I would fight tears as I told him just how much I believe his life can have another verse. There isn’t much I know, but I do know that.

This holiday season, as our Christmas Jars fill, may we remember that it’s not just about the change on the inside.

It’s about the prayers, hope, love, forgiveness, and second chances that grow inside.

And for me? It’s about a man I haven’t met. And the man I still need to become.