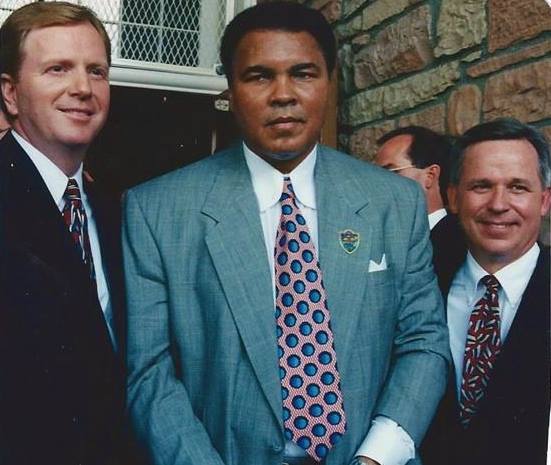 He floated like a butterfly; he stung like a bee. Muhammad Ali, proclaimed by himself—and practically everyone else—as "The Greatest," was never one to brag. After all, he said, "It's not bragging if you can back it up."

And back it up he did. The long-standing heavyweight champion, who passed away peacefully over the weekend at age 74, is widely regarded as the greatest boxer of all time.

Ali retired from boxing in 1981, but he remained a controversial and notable public figure. Deeply devout in his Muslim faith (he changed his name from Cassius Clay in his earlier years), Ali had a tremendous respect for religion—and perhaps that's what brought him to the Salt Lake Tabernacle in 1997, where he attended a live broadcast of the Mormon Tabernacle Choir's "Music and the Spoken Word."

In conjunction with a widespread outpouring of grief at Ali's passing, the Mormon Tabernacle Choir recently shared a picture of his visit on Facebook.

Many comments shared touching stories of how Ali influenced their lives, including this one: "I had a very sweet interaction with Muhammad Ali 37 years ago in June 1979. I was on a flight home from England with my baby girl and he came back to use the restroom in economy. He saw my baby and was enchanted with her. He made it his personal responsibility to look after the baby and me through the flight and when we arrived carrying all my stuff and speeding up my trip through immigration and customs. He kissed her head as he left giving me a card with a personal message written on it. He told me to tell her when she grew up not to let any boys kiss her because she had been kissed by the greatest. For all his boxing hype he was a kind good man with a giving heart who did a lot of good in the world. I'm honored to have shared a 12 hour flight with him."

Ali was notable for far more than his boxing prowess. Gaining success during the Civil Rights Movements, Ali sent a vocal and powerful message to African-Americans of racial pride and resistance to segregation. He also made headlines with his refusal to serve in the U.S. military during the Vietnam War, citing his religious beliefs and his irreconcilable disagreement with the conflict. This principled stand resulted in Ali being stripped of all his awards, a decision which was later overturned by the U.S. Supreme Court.