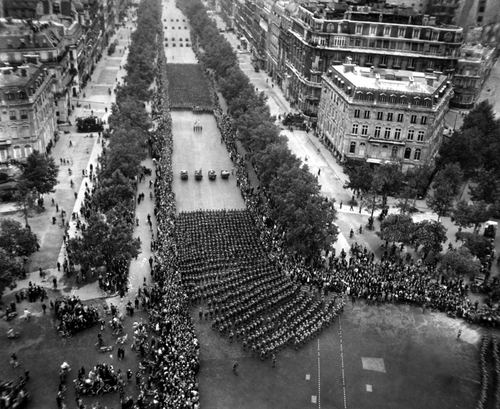 Eveline Marie Charlet Kleinert was born at Pully, Vaud, Switzerland, on February 9, 1878, the daughter of Marc Louis Charlet and Delphine Catherine Vionnet. She was baptized a member of The Church of Jesus Christ of Latter-day Saints on October 1, 1896, at the age of 18, about a year and a half after her parents’ baptism. 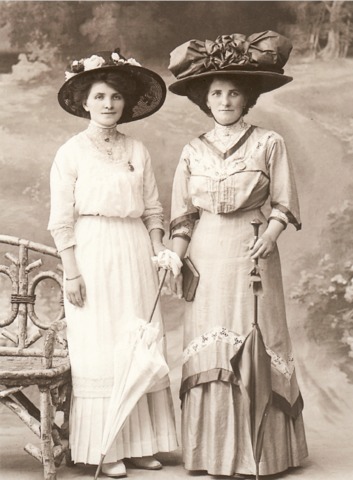 In 1915, Kleinert left Europe to become a governess in San Francisco, California. While in the United States, she received her endowment in the Salt Lake Temple on February 24, 1915, and later performed temple work for her parents. Kleinert, always a missionary and gospel light, moved to Paris, France, when she was 47. Soon after, she married Charles (Karl) Kleinert, a 38-year-old Swiss taxi driver who was not a member of the Church, on December 15, 1925.

More than a decade after Kleinert’s marriage, the dark clouds of Hitler’saggression began spreading across Europe. In October 1939, the missionaries and the mission president were either called home or to safer fields of service. Since all other priesthood holders had been evacuated after the general mobilization of France’s armed forces in September 1939, the departure of the missionaries left no priesthood holders in Paris except Gaston Chappuis—a Swiss native who was serving as the French mission president’s secretary. He became the acting mission president but was instructed in a  telegram from President Heber J. Grant in June 1940, shortly after Hitler began his invasion of France, to close the mission and leave for the United States. Before leaving Paris, Gaston Chappuis left the care of the Paris Branch in the hands of Kleinert, the branch secretary.

Kleinert took special care of the Paris Branch, consisting of a handful of about six older women: herself, Sister Beaucantin, Sister Brenkle, Sister Maillet, Sister Tourneau, and Sister Martin. She conducted church meetings in her apartment about every other week where the sisters would strengthen each other through prayer, sing hymns together, read the scriptures and the French translation of James E. Talmage’s book The Articles of Faith, and bear their testimonies. She also acted as secretary for these meetings as she had been instructed by Brother Chappuis, collecting the meager tithes and fast offerings and keeping them for a future day when the priesthood would  again be present in Paris. When food packages came, she would distribute them to those most in need and visit the sick to give whatever help she could. Without any way to communicate with other Church leaders, she singlehandedly led the Paris Branch during the war, her faith never wavering as she ministered to those in need.

On one occasion, a man made a visit to a church meeting at Kleinert’s apartment, but it was not in the way Kleinert expected. From an article written by her niece Marguerite C. Bates in 1997, we learn that “one Sunday [the women in the Paris Branch] were taking turns bearing testimonies when the door flung open and a Gestapo young man came in and sat down. The women were terrified because it was against the German occupation laws to congregate or to have meetings. The German soldier stood up and bore his testimony and quoted the 12th Article of Faith, which states that we believe in being subject to kings, presidents, rulers, etc., and that was the reason he was in Paris. After bearing his testimony, he left and of course he never reported the elderly sisters to the Gestapo.”

But there were many other occasions from 1940 through 1944 when even these small branch meetings could not be held. Extreme cold weather, lack of fuel for heating, no transportation, and illnesses were some difficulties that sometimes prevented the sisters from gathering together. During these times, Kleinert would try to visit the sick sisters, providing care and giving comfort as best she could.

Tragedy struck the small branch of sisters on August 17, 1943, however, when Sister Louise Beaucantin passed away. Even more difficulties came as the war entered into its fifth year, with food lines growing even longer and what little food there was often running out.

In the winter of 1944, all the sisters of the branch were tired, ill, and deprived of simple necessities. So Kleinert made a special effort to contact the only Melchizedek Priesthood holder in the country, Léon Fargier, who lived hundreds of miles away in Valence—the southeastern part of France. She requested that he come give priesthood blessings to the afflicted sisters of the branch. Traveling at great risk through enemy-occupied territory, this courageous brother was able to come to the aid of these elderly women. He blessed and administered the sacrament to them—a sacred ordinance which they had not been able to partake of since Brother Chappuis left Paris four years earlier—and gave each sister a priesthood blessing. 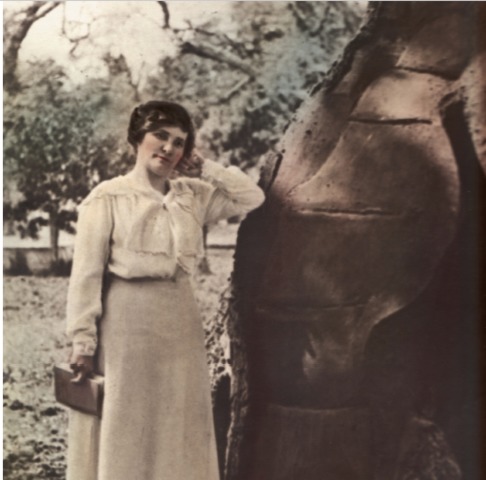 Though the sisters’ faith was strengthened by the visit from Brother Fargier and the promise of a pending end to the war, conditions became so poor in Paris—with fuel shortages, no reliable transportation, and illnesses brought on by extreme deprivations—that Kleinert requested that the sisters forgo church meetings and stay at home. Instead, every week she would send a comforting letter to each one and would receive an answer from each in return. But even this correspondence

had its difficulties as mail was censored in France. Kleinert’s niece, who lived in the United States during the war, reported receiving letters from her “Tante” Eveline that were torn, opened, and full of black marks with some of the contents even missing. But despite these difficulties, the letters allowed the sisters’ gospel ties of love, peace, and prayers to continue uninterrupted until the war finally drew to a close in 1945.

Some months after the end of the war, Kleinert’s prayers were answered when her husband,  Charles, found a notice on the bulletin board of the Red Cross headquarters announcing Latter-day Saint services to be held at a servicemen’s building. Charles, knowing his wife’s devotion to the gospel and those sisters she was in charge of, quickly made contact with the American servicemen, who were then able to contact the faithful sisters with the joyful news that the priesthood had returned to Paris. 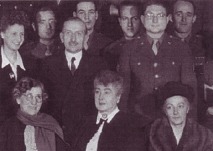 At an April 1945 servicemen’s meeting, special mention was made of the faithfulness of the sisters of the Paris Branch. In January 1946, apostle Ezra Taft Benson, accompanied by Frederick W. Babbel, traveled to war-torn Europe to fulfill his calling from the First Presidency as the European mission president. His assignment was to re-establish the European missions and care for the needs of the distressed Saints in Europe.

When Elder Benson came to Paris early in 1946, he arranged for aid packages to be given to members, which helped relieve some of the enormous food and clothing needs. In March, he arranged for a new mission home in Paris, and Kleinert was one of the volunteers to help clean the building.

On March 10, 1946, a farewell meeting was held for the servicemen who had brought so much joy and hope and shared testimonies with their sister Saints. Kleinert recorded in her minutes that these elders were a ray of sunshine after a terrible storm and that the meetings with the servicemen were filled with the Spirit of the Lord. It was with a profound sadness that they watched the servicemen depart. But it was also with a heart full of thanks for the renewed happiness they now had. And Kleinert had one extra thing to be thankful for. After years of watching and participating on the sidelines of his wife’s church activities, Kleinert’s husband decided to be baptized. He became a member of the Church on June 16, 1946.

Even after the war officially ended, hardship lingered long. Rationing continued for years after the war, and in 1947, the gasoline rationing became especially troubling for Kleinert’s husband and nephew, who both depended on gasoline to earn a living.

But Kleinert continued to show gratitude for the blessings she had in abundance. In a letter from Kleinert to her niece in 1947, she wrote, “Last week I received a nice parcel from a branch which made me very happy. Without a doubt, it’s the Lord who touched these hearts. I do not know how they got my address. The branch is from Oceanside, Hempstead, N.Y.” In a 1949 letter, she acknowledged that “We always feel the Lord’s blessings upon us. We are never in need of something.”

Eveline Charlet Kleinert passed away on August 1, 1949, at the age of 71. She was a wonderful example of a true pioneer with a strong and fervent testimony of the gospel of Jesus Christ from the time she was baptized in 1896 until her passing in 1949. She was a messenger of the truth to many Charlet family descendants. She was a ministering angel to her sister Saints in the Paris Branch during World War II. Despite experiencing war, hunger, and isolation from the Church, her faith never wavered as she always trusted in the Lord’s watchful care. In a letter she wrote for the Deseret News in June 1949, just a few months before her passing, she shared her strong testimony: “Ma foi dans l’Evangile n’a jamais tremblée étant sûre du secours de mon Père dans les cieux. (My faith in the gospel has never wavered, being certain of help from my Heavenly Father.)”

Lead image from Shutterstock. All others courtesy of Geneva Bates Pincock