The story behind BYU football’s ‘Love One Another’ t-shirts

Earlier this summer, BYU football’s team leaders called a players-only meeting and decided they wanted to send a message. The message would be similar to social justice messages displayed by NBA and WNBA athletes, but they didn’t want the message to be controversial in any way. As standout wide receiver Dax Milne told the Deseret News, someone mentioned “Love one another,” and in their September 7 opener, shirts with the phrase that Latter-day Saints recognize from Primary were debuted by the team during warmups.

Mark Clegg, director of the BYU Store, recalls seeing the shirts, which say "We are 1" on the front, when the team ran on the field and thinking “Whoa, whoa, whoa, everybody’s going to want those.” And Clegg was right. After working with two of the team’s leaders, Isaiah Kaufusi and Troy Warner, the BYU Store was able to obtain a licensing deal and began selling the shirts with 100 percent of proceeds going to minority students, per the team’s request. The initial batch of shirts sold out in two days, with profits running into the tens of thousands according to the Deseret News. 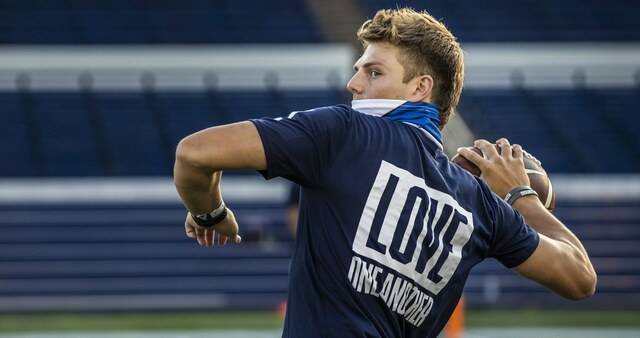 Wearing the message on their backs requires that the players play with that message in their hearts, leading the Cougars’ sportsmanship to also catch the attention of national media.

► You may also like: Why 2 BYU football players gave their opponents a Book of Mormon on the field

“We pride ourselves on being a family here, and when one person or when a few people feel a certain way, we like to talk about it,” Warner said. “We wanted to send a message about the way that we want to live life and encourage others to do so as well, and that’s to have equality and to live very Christlike. What would He do? That’s love one another.”

Read more about the shirts and why Coach Kalani Sitake says they are aligned with everything the team stands for on Deseret.com.