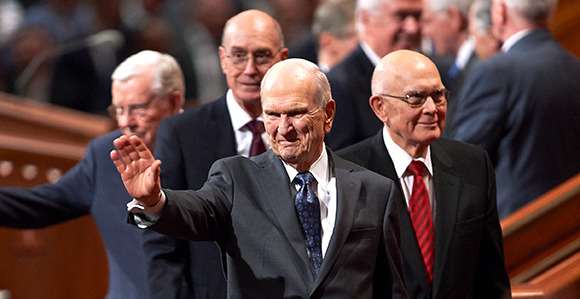 The journey from premortality back to our heavenly home is like a “great adventure,” as told in J.R.R. Tolkien’s classic novel The Hobbit.

Once you decide to drop everything and get going on your epic gospel quest, “all God asks is that you keep striving,” Elder Dieter F. Uchtdorf of the Quorum of the Twelve Apostles taught in his Sunday morning general conference remarks.

“The restored gospel is, in a sense, a renewal of the call to adventure we accepted so long ago. The Savior invites us, each day, to set aside our comforts and securities and join Him on the journey of discipleship,” Elder Uchtdorf said. “There are many bends in this road. There are hills, valleys, and detours. There may even been metaphorical spiders, trolls, and even a dragon or two. But if you stay on the path and trust in God, you will eventually find the way to your glorious destiny and back to your heavenly home.”

Elder Uchtdorf’s message about the journey of discipleship was one of many faith-building themes shared by speakers in the 189th Semiannual General Conference.

While a great deal of attention was focused on major announcements and big changes at conference, leaders of The Church of Jesus Christ of Latter-day Saints also taught a variety of gospel principles centered around themes such as finding joy in the gospel, commitment and the blessings of keeping covenants, avoiding the traps and deceptions of the adversary, and trusting in God, among others.

Elder Dale G. Renlund of the Quorum of the Twelve Apostles said being converted unto the Lord starts with an unwavering commitment to God followed by making that commitment part of who we are.

“Internalizing such a commitment is a lifelong process that requires patience and ongoing repentance,” Elder Renlund said. “Eventually, this commitment becomes part of who we are, embedded in our sense of self, and ever present in our lives. Just as we never forget our own name no matter what else we are thinking about, we never forget a commitment that is etched in our hearts.”

Elder Terence M. Vinson of the Presidency of the Seventy quoted scripture from Haggai about being committed, or as they say in Australia, “fair dinkum.” He taught that true disciples of the Savior are fully committed to the gospel.

Elder Vinson related two experiences of playing rugby. In the first, he received a fat lip for not going all out. In the second, he did go all out but broke his jaw in the process.

“Lessons were learned from this parable of the fat lip and the broken jaw. Despite my memories of unsatisfied cravings for solid food during the six weeks when I could ingest only liquids, I feel no regrets about my broken jaw because it resulted from my giving my all. But I do have regrets about the fat lip because it symbolized my holding back,” Elder Vinson said. “Giving our all doesn’t mean that we will be continually enveloped in blessings or always have success. But it does mean that we will have joy.”

In the same session, Elder D. Todd Christofferson of the Quorum of the Twelve Apostles said finding joy involves keeping the commandments, overcoming sorrows and weaknesses, and serving as the Savior served.

“Even when we are found faithfully keeping the commandments, there are trials and tragedies that could interrupt our joy,” Elder Christofferson said. “But as we strive to overcome these challenges with the Savior’s help, it preserves both the joy we feel now and the joy we anticipate. … It is in turning to Him, obeying Him, binding ourselves to Him, that trial and sorrow are turned to joy.”

Elder Gerrit W. Gong of the Quorum of the Twelve Apostles spoke about the blessings that come with “covenant belonging.” To belong with God and to walk with each other on His covenant path, he said, is to be blessed by covenant belonging.

“Covenant belonging is to make and keep solemn promises to God and each other through sacred ordinances that invite the power of godliness to be manifest in our lives,” Elder Gong said. “When we covenant all we are, we can become more than we are. Covenant belonging gives us place, narrative, capacity to become. It produces faith unto life and salvation.”

Elder Gong said those who honor their covenants may sometimes feel they are in the company of angels.

“The fruits of covenant belonging across family generations are felt in our homes and hearts,” he said.

Elder Ronald A. Rasband of the Quorum of the Twelve Apostles said the importance of making and keeping promises and covenants has weighed heavy on his mind. He emphasized the need to be trusted and maintain integrity in living true to “our promises to the Lord and others” while walking the covenant path.

“Keeping promises is not a habit, it is a characteristic of being a disciple of Jesus Christ,” Elder Rasband said. “When we keep promises to one another we are more likely to keep promises to the Lord.”

Deceptions of the Adversary

Elder David A. Bednar, Elder Neil L. Andersen, and Elder Gary E. Stevenson, all of the Quorum of the Twelve Apostles, warned members against the adversary’s dark deceptions, distractions, commotion, and enticements.

Elder Bednar related how he and his wife spent a few hours observing a pair of cheetahs as they stalked topis in Africa.

“In a paradoxical period when violating the sanctity of human life is heralded as a right and chaos is described as liberty, how blessed we are to live in this latter-day dispensation when restored gospel light can shine brightly in our lives and help us to discern the adversary’s dark deceptions and distractions,” Elder Bednar said.

Elder Andersen said Lehi’s dream in the Book of Mormon can serve as a warning for avoiding spiritual danger.

“In our world today, the adversary’s construction crews are working overtime, hastily inflating the large and spacious building. The expansion has spread across the river, hoping to enter our homes, while the pointers and scoffers sound off day and night on their internet megaphones,” Elder Andersen said. “Although we need not fear, we are to be on guard. At times little things can upend our spiritual balance.”

The adversary doesn’t easily abandon his destructive motives to deceive and demean. Obedience is key in avoiding the influence of the deceiver, Elder Stevenson said.

“May we recognize Satan’s deceptions for what they are,” he said. “May we withstand and see through the lies and influences of the one who seeks to destroy our souls and steal from us our present joy and future glory.”

Adding his voice to the warning, Elder Peter M. Johnson, a General Authority Seventy, cautioned against the distractions of technology and social media.

“These technological advances are amazing, but if we are not careful, they can distract us from fulfilling our divine potential,” Elder Johnson said. “Using them appropriately can bring forth the power of heaven and allow us to witness miracles as we seek to gather scattered Israel on both sides of the veil. Let us be careful and not casual in our use of technology. Continually seek for ways that can draw us closer to the Savior and allow us to accomplish His work as we prepare for His Second Coming.”

Trusting in the Lord

Afflictions and sorrow prepare each person to experience joy if the place their trust in the Lord and His plan, said Elder L. Todd Budge, a General Authority Seventy.

“We live in a world where the monster waves of death, physical and mental illness, and trials and afflictions of every kind break upon us. Yet, through faith in Jesus Christ and choosing to trust Him, we too can have light continually whether above the water or under the water. We can have assurances that God never does cease to blow us toward the promised land,” Elder Budge said. “Trusting in the Lord includes trusting in His timing and requires patience and endurance that outlasts the storms of life.”

“No matter the obstacles we face in life, we can trust that Jesus Christ will prepare a way forward as we walk with faith in doing His will,” Elder Alvarado said. “God has promised that all who faithfully live according to the covenants they have made with Him will, in His time, receive all His promised blessings.”

In relating the personal tragedy of her father’s suicide, Sister Reyna I. Aburto, second counselor in the Relief Society general presidency, encouraged those under dark clouds of depression, anxiety, and other real emotional afflictions to seek help. Disciples of Christ should also look for opportunities to lift others with heavy burdens and withhold judgement. Above all, rely on the Lord, she said.

“Do all you can and trust in the Lord’s atoning grace,” Sister Aburto said.