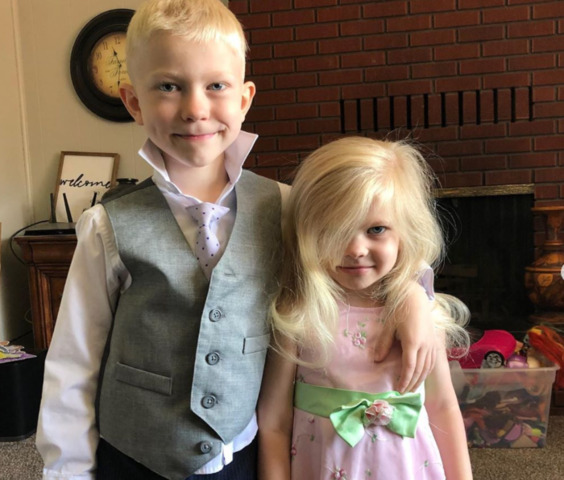 This 6-year-old went viral for saving his sister from a charging dog. Here's the invitation his Latter-day Saint family extends to the world

Bridger Walker, age 6, touched the hearts of many after shielding his sister from a neighborhood dog at high cost to himself. His story has been covered by major news outlets such as Yahoo! and ABC News, and he’s received messages of love far and wide, including from celebrities like Chris Evans and Robert Downey Jr. But what many may not know is that the Walker family are Latter-day Saints and through this experience they have spread a message of love and a call to “comfort those that need comfort.”

Bridger and his 4-year-old sister were playing in the backyard of a friend’s house in Wyoming when they were unexpectedly charged by a dog. With only seconds to decide what to do, Bridger bravely stepped in front of his little sister, trying to shield her from the attack.

The dog leaped and latched itself onto Bridger’s cheek. When the dog released, Bridger grabbed his sister’s hand and ran them to a part of the yard where he thought they would be safer. At that point, the dog’s owner came outside, secured the dog, and then rushed Bridger inside and called for emergency help.

Bridger was rushed to the hospital where he would undergo a nearly two-hour surgery to pull his face and scalp back together, receiving in total over 90 stitches.

According to a statement made by Bridger's family on Instagram, they had “just discussed personal sacrifice and service” during family time on Sunday. Clearly, Bridger had been paying attention.

“Since COVID-19 hit the world with all its fury, we have also taken time out of our busy schedules to sit as a family each Sunday,” the Walkers said their statement. “We discuss how each family member is doing, going over the goals set by each of our children and reading from the scriptures. Bridger commonly remembers more than his siblings, actively contributes, and amazes us with his ‘old-soul’ insights.”

As Bridger’s father waited with him before surgery, he asked Bridger for details about what had happened. When Bridger explained how he had stepped in front of his sister to protect her, his dad asked him why he had done it. His answer, given without hesitation, is recorded in the family’s Instagram statement: “If someone had to die, I thought it should be me.”

On Instagram, the family shared that Bridger and his little sister have had a “special bond” since the day she was born. Bridger was 18 months old when his new sister arrived. His parents reported being a little nervous about how he would react to the baby, but Bridger smiled and jumped into a hospital chair until it was his turn to hold her. Once Bridger had the baby, he wasn’t eager to let her go.

“When Grandpa asked for a turn, Bridger pointed to his chest, indicating that he wasn’t going to give her up. And so it continued for the next 15 minutes. Anytime someone attempted to take her from him, he would point to his chest. He had waited for his turn, and he wasn’t going to give her up,” the family wrote online. “Since that time, Bridger rarely strays far from his little sister.”

In an effort to help cheer Bridger up after the incident, his aunt Nicole Walker shared his story on her Instagram account, hoping to get some “words of encouragement from his favorite heroes.”

Those heroes have not let Bridger down.

The actors that played Captain America, Spiderman, and Iron Man all sent messages applauding Bridger for his bravery. Videos of Bridger’s reactions are too heartwarming to miss.

Robert Downey Jr., who played Iron Man, told Bridger he was a “rockstar” and to give him a call on his next birthday for a special surprise.

And last but not least, Bridger got to call his favorite superhero, Spiderman, played by Tom Holland. Holland invited Bridger to come visit him on set when they began shooting the third Spiderman movie.

“When I first posted for Bridger, I expected maybe 500 likes at most and maybe a couple dozen reshares. But here we are. So much love from all walks of life,” said Nicole on Instagram. Her original post about Bridger has over 1.5 million likes.

Nicole reports that they have received tens of thousands of messages from strangers who were touched by Bridger’s story. After sharing that Bridger enjoys collecting rocks, people began sending him pictures of interesting rocks and asking if they could send him some in the mail. His family agreed to pass along a P.O. box address for those wanting to send a care package.

“We . . . are so overwhelmed with the outpouring of love Bridger has received,” Nicole wrote.

A Request to Comfort Those that Need Comfort

As many concerned people asked what they could do to help Bridger, the Walker family denied financial assistance and suggested contributing to a few different charities. The family also used this opportunity to send a gospel-centered message to the world, evidently drawing from scripture to help them do so.

“Somewhat ironically, prior to Bridger’s injury, our family had been discussing what we would say if we could spread one single message to the entire world. We had no real expectation we’d ever get a chance,” the family wrote.

They continued, “After Bridger’s actions, our family has settled on a simple request: may we each actively strive to bear one another’s burdens; stand up for and protect those that are weak, oppressed, or those whom the world might forsake; mourn with those that mourn, comfort those that stand in need of comfort, and love one another. May we follow Bridger’s example, approach the world as a child, and bring greater peace to our own homes, communities, states, and countries.”

Emily first found her love for storytelling as an editorial intern at LDS Living. She recently returned as senior editor and loves that her job is to highlight the meaningful in life. Emily is a graduate of Utah State University in English. Hiking trails, dance studios, and behind the cover of a good book are some of her favorite places to be.