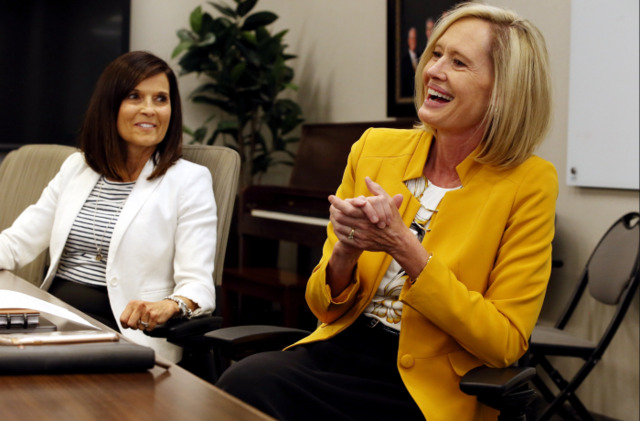 This Week from the Pulpit: How Service Empowers Us during Times of Fear

1 Timothy 1:7 gives us this promise: “For God hath not given us the spirit of fear; but of power, and of love, and of a sound mind.”

A similar promise is sounding from the pulpit this week at a time when some feel like they are running on low power. President Bonnie H. Cordon, Young Women general president, testified that intentional service will fill us with priesthood power. BYU–Idaho President Henry J. Erying and his wife, Sister Kelly C. Eyring, promised that the Holy Ghost will empower us to love and serve our families.

This week, Elder Gerrit W. Gong of the Quorum of the Twelve Apostles also shared that because of Christ, one day all things will be restored to their “perfect and proper frame.” While we stumble through life seeking to activate these blessings in our lives, Elder D. Todd Christofferson of the Quorum of the Twelve Apostles reminds us that any effort is needed and appreciate by the Lord.

President Erying and his wife Kelly began their remarks in a devotional on Tuesday, May 19, by expressing concern for families with young children who have been stuck in small apartments. President Erying reflected on his first time living in Rexburg, Idaho, as a young child when his father, President Henry B. Eyring, was serving as president of the college. The family of three young boys and their parents shared a single-wide trailer. President Erying remembers regretfully that one of his 3-year-old brother’s first full sentences was “He hit me.”

While living in confined places can be difficult, President Erying counseled families to try and use this time to appreciate families through the guidance found in “The Family: A Proclamation to the World.”

He then reflected on his experiences as a young father when he spent so much money traveling for business, that his credit card company called him because they assumed his card had been stolen.

“It was only in hindsight that I recognized the degree to which I had bought into the world’s definition of success. Its temporal prizes, including promotion and ever-higher pay and perks, had become my way of ‘keeping score’ and feeling proud of myself,” President Erying said.

His wife summarized what they learned from that time of life.

“By contrast, the work that wives and husbands spend nurturing children and grandchildren can be emotionally and spiritually fulfilling throughout a lifetime and into eternity,” said Sister Eyring.

Lastly, President and Sister Erying suggested journaling as a way to help all families, young and old, navigate their lives.

“Faith is a choice that we can make in any circumstance, no matter how difficult it may seem at the time,” President Eyring said. “And writing optimistically about our experiences can solidify our faith, building spiritual antibodies against the spiritual tests yet to come.”

Read a summary of the talk at Church News.

President Cordon on ‘Women and Priesthood’—Increased Power Through Service

In a Church News series where women of the Church discuss their personal experiences with priesthood power, President Cordon shared what she learned about the power of service from her friend, Sister Amy Wright. Wright was diagnosed with cancer and given only a 17 percent chance of survival. During a particularly difficult time of treatment, Wright cried out to her husband, “I quit!”

His kind response was, “Then we need to find someone to serve.”

Wright did come up with creative ways to serve while in her limited situation. She found names for the temple and frequently sent notes of love and encouragement to others. The effects of Wrights’ efforts in her own life were significant.

“Serving others is a source of strength, even when we ourselves feel weak. When serving, Amy felt physically and spiritually stronger, but the emotional strength she received was truly more than she could have imagined. She has a taste of what Elder Neal A. Maxwell bore testimony of in both word and deed, ‘Empathy during agony is a portion of divinity!’” wrote President Cordon.

President Cordon also shared that because service is so powerful, the adversary will try to stop us. She gave an example of one woman who reached out to Wright during her time of trial.

“Irmgard showed up on my front porch one summer afternoon about a month after I had completed my last chemotherapy treatment,”  Wright said. “In her arms was a small bag of ‘treasures.’ She confessed that she had wanted to drop something off to me for many months but that the thought kept coming to her mind, ‘Who am I to go and visit Sister Wright?’”

Irmgard’s gifts proved heaven sent when it was discovered that Wright’s cancer had not been eliminated and further surgeries would be required.

President Cordon ended her remarks with a promise.

“By intentionally making service to others part of our life, we will discover the mysteries of God. We will discover peace, find strength, and receive an increase of power as we serve our Savior, Jesus Christ, and strive to be His hands to lift and bless those around us.”