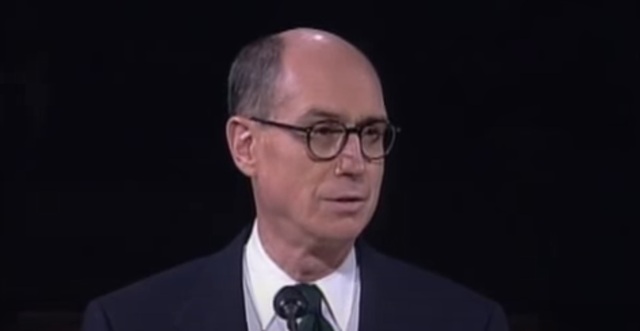 This may be one of the best talks you’ve never heard: President Eyring on what we are risking if we reject prophetic counsel

Editor's note: This article is part of a new LDS Living series, “This may be one of the best talks you've never heard,” highlighting talks you may have missed through the years.

Last Sunday night, I was at a friend’s home for dinner when a topic came up that I’m sure many of you have discussed at your family dinner table, talked about with your friends or have engaged with on your social media feeds: the whirlwind surrounding vaccines, masks, and prophets. Just reading those three words together may cause you to tense up at the memory of heated opinions and conversations gone south. But around this dinner table with my friend, she brought up an older conference talk that put the usual debate in a whole new, more significant light for me.

The talk my friend shared was given in 1997 but feels like it is direct advice for today. In it, a younger then-Elder Henry B. Eyring shares a powerful witness of the safety found in heeding prophetic counsel. He states that God does use multiple means to show us the path to safety but that “those means always include sending the message by the mouths of His prophets whenever people have qualified to have the prophets of God among them. Those authorized servants are always charged with warning the people, telling them the way to safety.”

I think it is, of course, much easier to follow the prophet when we are talking about reading scriptures daily, or serving others. It becomes very different when the prophet’s counsel corresponds to things that weigh heavy on people’s hearts and minds, keeping them up at night, and holding complicated emotions. There are things about this life that are difficult to understand and at times seem unbelievably unfair. Fortunately, we don’t have to have all the answers to mourn with those that mourn, and we can comfort those that stand in need of comfort while also upholding and sustaining the doctrine of the Church. The doctrines of God have always challenged and stretched men and women to be more than what we are naturally, and prophets have always been sent to deliver hard messages that help us in that effort. (Mosiah 3:19)

Over the past few days, I have had these difficult issues in my mind as I have studied my scriptures and have been struck by the role of prophets in scripture. They often gave counsel that was unpopular and that was not well-received. People sought to take their lives. Likewise, in our day, there are messages that I am sure are difficult for prophets to deliver and counsel that is certainly hard for us to hear. Sister Carol F. McConkie said, “According to the world’s standards, following the prophet may be unpopular, politically incorrect, or socially unacceptable. But following the prophet is always right.”

Even the Savior himself taught things that caused his disciples to say, “This is an hard saying; who can hear it?” (John 6:60). A few verses later we read that “From that time many of his disciples went back, and walked no more with him” (John 6:66).

• People “think they hear only a wise man giving good advice. Then if his counsel seems comfortable and reasonable, squaring with what they want to do, they take it. If it does not, they consider it either faulty advice or they see their circumstances as justifying their being an exception to the counsel.”

• “To believe that the choice to accept or not accept the counsel of prophets is no more than deciding whether to accept good advice and gain its benefits or to stay where we are. But the choice not to take prophetic counsel changes the very ground upon which we stand. It becomes more dangerous. The failure to take prophetic counsel lessens our power to take inspired counsel in the future.”

And what is at stake if we allow ourselves to pick and choose which prophetic guidance to follow? President Eyring said, “When we reject the counsel which comes from God, we do not choose to be independent of outside influence. We choose another influence. We reject the protection of a perfectly loving, all-powerful, all-knowing Father in Heaven, whose whole purpose, as that of His Beloved Son, is to give us eternal life, to give us all that He has, and to bring us home again in families to the arms of His love. In rejecting His counsel, we choose the influence of another power, whose purpose is to make us miserable and whose motive is hatred. We have moral agency as a gift of God. Rather than the right to choose to be free of influence, it is the inalienable right to submit ourselves to whichever of those powers we choose.”

Since reading these words, I have thought a lot about how I am always under the influence of someone—someone on my social media feed, a person I read about in the scriptures, the author of a newspaper column, my yoga teacher, etc. So, I must make a conscious choice: Who do I want to let influence my life?

President Eyring offered his witness of the prophet’s positive influence in his life when he said, “Every time in my life when I have chosen to delay following inspired counsel or decided that I was an exception, I came to know that I had put myself in harm’s way. Every time that I have listened to the counsel of prophets, felt it confirmed in prayer, and then followed it, I have found that I moved toward safety. Along the path, I have found that the way had been prepared for me and the rough places made smooth. God led me to safety along a path which was prepared with loving care, sometimes prepared long before.”

I love the process the President Eyring outlines: 1. Listen to the counsel of prophets, 2. Feel it confirmed in prayer, and 3. Follow. It caused me to consider whether I am taking these steps in my own life or turning elsewhere first when something significant happens in our world or in our church?

In today’s world, the word “follow” has come to mean something very different than it meant when the Savior said, “Come, follow me.” We equate the word with social media and the acquaintances we interact with there. But, among the definitions of “follow” are “to accept as authority” and “to be or act in accordance with.”

This, to me, is what it means to be a disciple—someone who accepts God-given authority and then strives to act in accordance with it.

Certainly, there will be those who will read this and assume that my choice to allow the prophet to be one of the most important influences in my life is an example of blind obedience. After all, I’ve been singing the Primary song since I could barely walk. But I would argue that it is quite the opposite. It is because of the safety, joy, and peace that I have found in my life as a result of continually standing by prophets and apostles, and choosing to sustain them. As President Boyd K. Packer once said, “We are not obedient because we are blind, we are obedient because we can see.”

The choice is now ours and the Savior’s words echo throughout history: “Will ye also go away?” (John 6:67). Will we follow His prophets and His apostles? Will we be friends and followers rather than foes and antagonists? Will our sustaining votes mean more than just raised hands? It is my hope that they will feel a little less lonely because of us and our choices, and that we will feel peace as we face the future with faith.