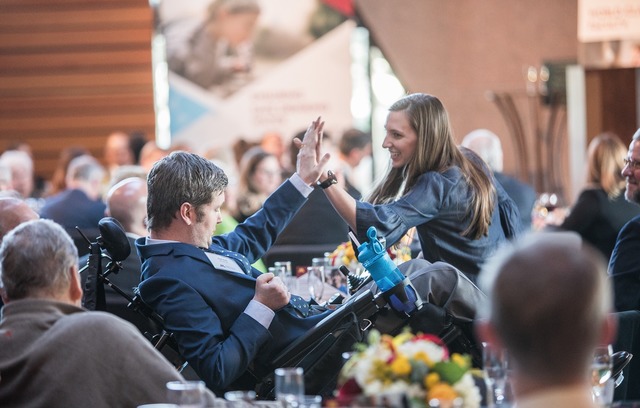 3 Years After a Traumatic Brain Injury, Latter-day Saint Couple Is "Counting the Miracles"

After Audrey Workman's fiancé suffered a traumatic, life-changing brain injury, she married him anyway knowing he was still the same lovable guy.

"A major reason I still married him, despite those challenges after his accident, is because of the hope we have for the future, that our joy will be full through Jesus Christ," Audrey Workman said. "Our faith has definitely been at the center of this whole journey."

It's been three years since Jared Workman was bucked off a horse and kicked in the head, fracturing his skull. The accident happened five days before the couple's wedding day. After several weeks in a coma, Jared regained consciousness and began his long recovery. Nearly a year later in 2016, Jared and Audrey followed through on their marriage plans in the Salt Lake Temple of The Church of Jesus Christ of Latter-day Saints.

Fast-forward to this fall. The couple that met and fell in love at Brigham Young University now lives near the campus of the University of Minnesota in Minneapolis, where Jared is making steady progress in his recovery and his wife is a graduate student majoring in health care administration.

As honored guests at a recent fundraiser for the Minnesota Brain Injury Alliance, a non-profit organization that helps people and families with traumatic injuries, a local TV station featured the Workmans' compelling story.

"The fact that they have made this journey together is just very powerful," Minnesota Brain Injury Alliance CEO David King said in the segment.

Traumatic brain injuries leave 5.3 million Americans, more than 2 percent of the U.S. population, with disabilities. That figure includes 56,000 victims in Utah, according to the Brain Injury Alliance of Utah (biau.org).

Footage from the Minnesota TV station story shows Jared Workman using a walker to practice walking. His wife says he started bringing the walker to Latter-day Saint Sunday worship services about three months ago. Before that he relied totally on his power chair, she said.

"He's walking a little bit every day just trying to get better at it, and he's definitely gotten stronger," Audrey Workman said.

Jared Workman also works with a vocational rehab specialist, is good with computers and has full mobility in his left arm, his wife said.

Meanwhile, Audrey Workman has drawn upon their experiences in pursuing higher education and a career in health care. Their journey has opened her eyes to how complex health care is and she hopes she can make a difference for families and caregivers.

"Having had those experiences, I am in a better position to make informed decisions at the top levels of health care," Audrey Workman said. "I hope to continue my career to be able to make business decisions that are truly focused on what is best for patients and their families."

Along the way, the couple has counted many "miracles" and blessings. In an August 2016 Facebook post, Audrey Workman shared a list of six miracles to remind herself of how "incredibly blessed" they have been and as a testament "that God answers prayers and is always mindful of us," she wrote.

One account described their quick arrival at the hospital and instant care of a surgeon.

Another told of a stranger selling the couple a car to transport Jared Workman for $1.

Other miracles involved Audrey Workman securing a much-needed job with benefits and finding accessible and affordable housing in a timely fashion, thanks in part the generous hearts and service of others.

"Every time that we have been in need, we have been provided for. As I reflect, I'm overwhelmed with gratitude because these are only a portion of what we have witnessed and received," she wrote in the Facebook post. "Every one of these miraculous events was preceeded with faith, hope and a whole lot of prayer — but it's funny to me, I received a lot more than I ever asked for. I believe that God knows what we need better than we do. I believe that God answers prayers most often through people. I am so dependent on His mercy."

With the blessings come the challenges, and the Workmans have had their share.

"Even if we didn’t have this big trial in our life I feel like we would still be struggling to remember that eternal perspective," she said.

In those moments the couple does its best to find humor in daily life and "cling to the knowledge of Jesus Christ and his resurrection," Audrey Workman said.

"We joke that he'll make a good boss someday because he's good at directing people to do stuff," Audrey Workman said.

"But everything will be made whole and right (through Christ and the resurrection). Understanding that truth alone drives so much of what we do and face everyday. We’re still together, still an eternal family. We enjoy being with each other. I think that brings enough joy to balance it all out. We have many challenges but we find a lot of joy every day just being with each other and taking it on together."

Lead image of Audrey Workman giving her husband Jared a high-five while attending the University of Minnesota School of Public Health's "Shaping a Future of Health" fundraising campaign in April.