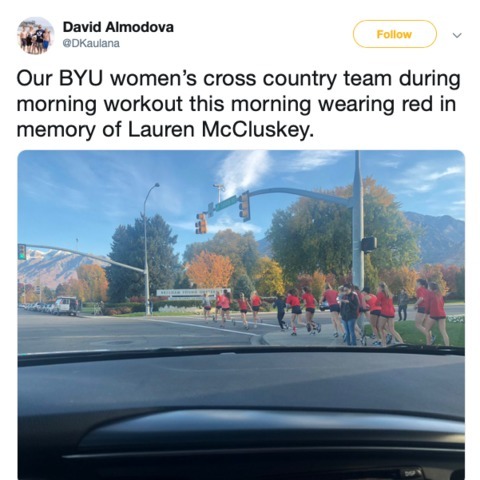 The higher education community in Utah was left grief-stricken after student-athlete Lauren McCluskey was shot and killed on Monday night. The tragedy has proved to be larger and more significant than any collegiate sports rivalry as students from Brigham Young University and Utah State are reportedly wearing red in memory of McCluskey, a talented track and field athlete.

While finding red in their closets was obviously a struggle, other BYU students and faculty have also posted in a show of solidarity.

Joining students from BYU and schools around the state in support of @UUtah and the McCluskey family. I so badly wish the nightmares of school violence and relationship violence will end. pic.twitter.com/ZlcScejciz— joehadfield (@joehadfield) October 24, 2018

In expression of our love and support to the McCluskey family and @utahathletics our student-athletes, coaches, and staff are wearing red today. pic.twitter.com/MnNPDQiQbI— BYU Cougars (@BYUCougars) October 24, 2018

As one Twitter user, @T_Prizm, put it, “As heated as the fans of Utah, BYU, USU get when it comes to our rivalries, it’s so heartwarming to see all the fanbases come together when tragedy strikes.”

As heated as the fans of Utah, BYU, USU get when it comes to our rivalries, it’s so heartwarming to see all the fanbases come together when tragedy strikes. What happened last night is what women fear most and I just can’t even begin to imagine how tough this is 4 McCluskey’s fam— Prattman (@T_Prizm) October 23, 2018