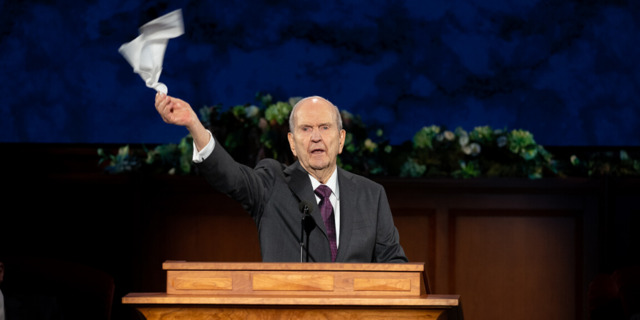 Editor's note: This story was originally published by LDS Living in April 2020 and is being shared again in anticipation of October 2020 general conference. Here's how you can watch.

Here are 12 of the ways the April 2020 general conference will be remembered by all of us for years to come. Click each link for more information about each announcement.

Due to the COVID-19 pandemic, general conference was broadcast from a small auditorium on Temple Square. Attendance was limited to the First Presidency and those assigned to give talks and prayers for each session. Read that announcement here.

2. A Solemn Assembly and a Hosanna Shout

The Church of Jesus Christ of Latter-day Saints released a statistical report online during the Saturday afternoon session of April 2020 general conference. The report announced seven dedicated temples during 2019 and growth in worldwide Church membership. For more on the Church report including number of missions, stakes, full-time missionaries, service missionaries, and more, click here.

In the Saturday evening session of general conference, Laudy R. Kaouk and Enzo S. Petelo each shared thoughts on how priesthood blesses youth. Typically, general conference features speakers chosen from the General Authorities and General Officers of the Church. However, this is not the first time teenagers have spoken in general conference. Learn more here.

During his Saturday evening remarks, President Nelson unveiled a new Church symbol. The symbol includes the name of the Church within a cornerstone and a representation of Thorvaldsen’s marble statue, the Christus, under an arch. Find out more about the meaning of the new symbol here.

President Nelson invited the world to fast again for the COVID-19 pandemic during his Saturday evening remarks. The fast will take place on Good Friday, April 10. Learn more here.

8. An Address by Each Female General President

Presidents Jean B. Bingham, Bonnie H. Cordon, and Joy D. Jones each spoke in the April 2020 general conference. Find summaries of their remarks at Church News.

In his remarks, Elder David A. Bednar said there would be 18 temple groundbreakings in 2020. He also discussed the growth of temples in the lifetime of President Nelson.

10. "The Restoration of the Fulness of the Gospel of Jesus Christ" Proclamation Introduced

President Nelson introduced a new proclamation, "The Restoration of the Fulness of the Gospel of Jesus Christ: A Bicentennial Proclamation to the World."  The full text of the proclamation can be read here.

Earlier this year, the Church announced that applications were open for a multicultural choir for this general conference. While COVID-19 may have disrupted the original plan, it did not stop a multicultural choir from being formed. At the conclusion of conference, clips of Latter-day Saints from all over the world were shown singing, "We Thank Thee, O God, For A Prophet."

Want to stay in the Latter-day Saint loop all year long? Subscribe to the daily  LDS Living Newsletter for information and inspiration right to your inbox.

The General Conference Addresses Journal Edition has all the text of the general conference addresses in one spiral-bound paperback. Extra-wide, lined margins give you space to record your impressions and document insights you receive. Order the April 2020 edition now or preorder the October 2020 edition so you can create an enduring record to make general conference truly unforgettable.