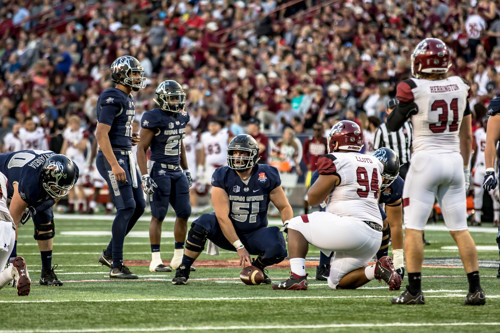 USU, Stanford Latter-day Saint Football Players Share How Their Missions Changed Them, Made Them Better Players

Three of Utah State University's most experienced offensive linemen have something in common.

These three amigos have been known to communicate in español during games but find particular delight in dropping lines from the 2006 film Nacho Libre on opposing defensive players, especially Ficklin, who quoted a few lines after a recent practice. 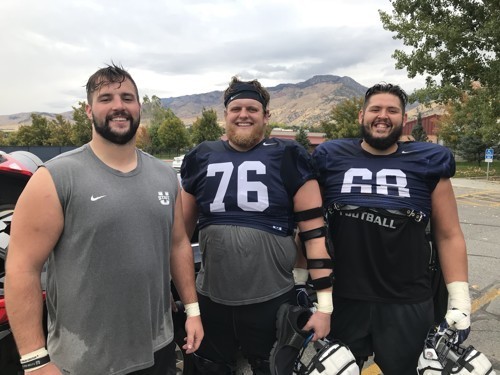 "'I like your cow;' 'Save me a piece of that corn for later,'" Ficklin said. "We goof around a lot. A lot of people on the other teams don't like it and when they don't reciprocate, it's kind of a damper. So I wish they would just be our friends."

While each of the strapping linemen served in a different country — Ficklin in New York City, Iniguez in Spain, and Andrus in Mexico — the bond of shared values and working together in the trenches has contributed to their friendship and team chemistry. The mission experience has also blessed each one personally.

"What does my mission experience mean to me now? It means everything to me," Andrus said. "There's not a day that goes by that I don't think about it, that I don't reflect upon it, and that I don't use something I learned from it in my everyday life."

Ficklin, Andrus, and Iniguez are three of 25 returned missionaries on Utah State's roster this season. Another returned missionary, wide receiver DJ Nelson, said he teared up when President Russell M. Nelson recently announced a new temple for Latter-day Saints in Puerto Rico, where he served from 2012-2014.

Aggies' head coach Matt Wells acknowledged the role returned missionaries have played in the development of USU's football program over the last decade.

"The returned missionary program at Utah State is alive and well," Well said. "It's absolutely a part of the fabric of the program's turnaround over the last eight years and it's absolutely part of our recruiting foundation. Sign-and-sends, guys out currently serving, returned missionaries, lot of guys on staff — it’s part of the culture that we live in here. It's been an absolutely positive experience for me as a head coach, and is something that we will always do here at Utah State."

Andrus, Iniguez, and Ficklin, all two-year starters on the Aggies' offensive line, each described how missionary service has blessed their lives.

For Andrus, the mission not only strengthened his faith but helped him learn how to multi-task, be disciplined, and be a better student. The stout lineman from California also chose Spanish as his major.

The clean-shaven missionary look is now covered under a thick beard, but there's a good reason for that, Andrus said. 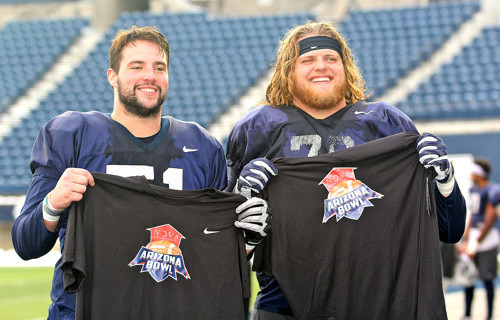 "The beard is for my chin strap; it keeps the friction down," Andrus said with a smile."But I don't necessarily miss being clean-shaven."

Work habits and time management are two aspects that have benefitted Iniguez.

"Work ethic is something that although I learned throughout my formative years, it was reinforced on my mission," Iniguez said. "Being a college student and a husband and a father, time management is also an attribute you need to have. I feel like I learned that on my mission."

While serving in Manhattan, Ficklin served in a singles ward where many members chased their dreams, such as working on Wall Street or performing on Broadway. Their ambition inspired Ficklin, he said.

"It really helped me to see that there's value in pursuing your dreams and doing your best. There is virtue in that," said Ficklin, who walked on at BYU before transferring to Utah State. "I think that example of those people helped me to have the patience and perseverance to walk on at two different programs and try and earn a spot."

The mission experience has also been rewarding in other ways, he said.

Just like working with a companion in the mission field, two seasons of intense blocking on the offensive line has not only deepened their friendship but created a strong bond with the rest of the team.

During a post-practice interview, Sean Taylor, the starting right tackle, approached the trio. Although Taylor isn't a Latter-day Saint, Ficklin teased that he served his "mission" at Laney College in California.

"We say they bring the calm to the team because a lot of us are hyper and all out there," Taylor said. "You know, the guys on the left side (of the offensive line) went on missions, the guys on the right side didn't (Taylor and guard Rob Castaneda). So then you put Quin in the middle and he's loud and he's been on a mission so you just blend us together and make the perfect vanilla and chocolate milkshake."

As President Nelson stepped to the pulpit at the end of the Sunday afternoon session of general conference on Oct. 7, DJ Nelson and teammate Dax Raymond were relaxing in the home of Aggie basketball player Crew Ainge and his wife.

When Puerto Rico was announced among the 12 new temples, DJ Nelson couldn’t contain his jubilation. 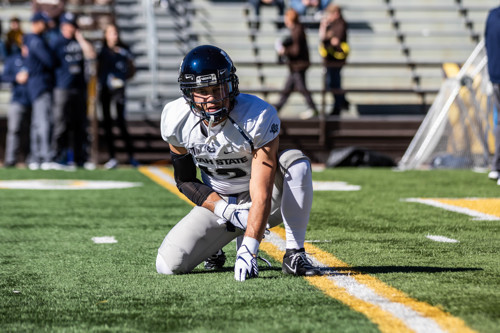 “I jumped up and started yelling and screaming, just as if I were watching a game and somebody scored a touchdown,” Nelson said. “It was special for me. The time that I spent there is very near and dear to my heart. To know the blessings that those people are going to receive, those blessings they’ve worked and sacrificed for, just makes me as happy as can be.”

DJ Nelson returned to Puerto Rico with family members in 2016 and maintained contact with friends in the U.S. territory after the destruction of Hurricane Maria in 2017. But the temple announcement stirred feelings he hadn’t felt since his mission.

“It was a joy and happiness for those people that I hadn’t felt in a long time. It was a nostalgic feeling, something I will never take for granted,” Nelson said. “So yeah, I’m kind of at a loss for words. It’s just super special to me.”

Nelson hopes to return to Puerto Rico when the new temple is dedicated.

Outside of Utah, one college football team that has consistently recruited returned missionaries in recent years is Stanford University. 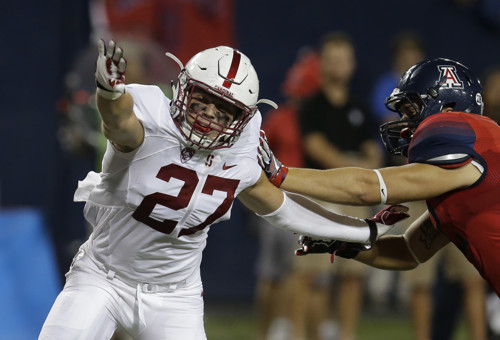 In an interview with the San Francisco Chronicle, Barton described his mission as an "eye-opening experience."

"Those are two years away from football, it’s two years where you’re maturing, getting older, but two years where you’re not paying attention to your body at all. You’re not lifting like you would be if you were here. You’re not learning the playbook. You’re not focusing on football," Barton said in the article. "Some of the pros are: You learn a lot about yourself. You get some mental discipline, which is important for football as well. The cons are: You get out of shape. Guys either put on a lot of weight or lose a lot of weight. But I personally think it’s a great thing to do to go on a mission. . . . I don’t regret my mission at all." 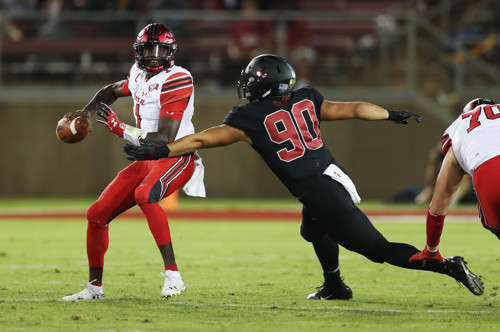 In another San Francisco Chronicle article, Reid said his mission was "life-changing." The pass-rush specialist was also grateful for his assigned destination.

"I wanted to go there since I was little," Reid said in the article. " That's where my roots are, my heritage."