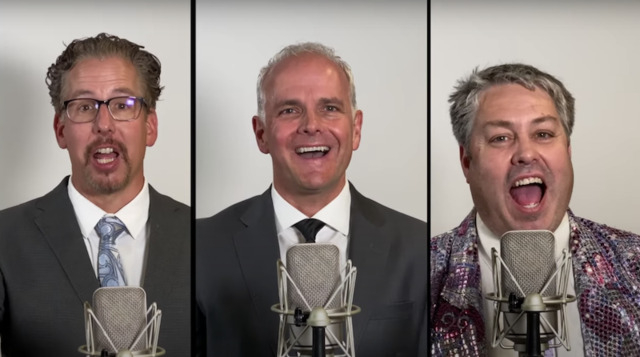 Video: Bishopric invites their congregation back to church with a little Billy Joel flair

The Highland 19th Ward bishopric hadn’t seen their congregation in “the longest time” due to the pandemic, and it was time to start meeting again. So why not invite their ward members back to church—Billy Joel style?

In a video published on October 7, the bishopric gets their groove on with a twist to Joel’s classic single “The Longest Time,” swapping out the soulful lyrics for ones about the pandemic, but with a sense of humor.

“Back in March, the strangest things occurred: pandemic, earthquake, church meetings put on hold,” the members in the bishopric sing, complete with backups, snapping—and for one member, a sparkly suit. “So they quarantined us in our homes, home-centered Sundays quick became the norm. First, we felt heroic, then it soon felt claustrophobic. Cause now we’ve been there for the longest time.”

Since the video went live, it has garnered over 172,000 views on YouTube and has received positive reactions from Kansas to England to the Pacific.

“Way to go Bishopric. You are fantastic. What a cool way to invite your ward back to church. May you continue to bless the lives of everybody through your ministering. Love from a fan all the way in New Zealand,” wrote commenter Kaye Nonoa.

Another commenter joked that “This is a hoot. These gentlemen could almost convert me.” And for others in leadership callings inviting their congregations back to church, the Highland 19th Ward bishopric has certainly raised the bar, remarked another.

“And now every bishopric in the church is a little less cool. Well done, brethren. Very well done! (from one less-cool Bishop) ;-),” said Erik Carlton.

The song concludes with the bishopric inviting their members to gather at church—for at least the foreseeable future.

“Who knows how much longer this goes on. But for now, we’ll play the cards we’ve drawn,” the bishopric sings, holding up a hand of Rook playing cards. “So, grateful we’ll gather. No other friends we’d rather be with than with you for the longest time,” they finish, snapping their way all the way into a meetinghouse.

Trevor Lucas, the bass singer in the trio, responded to the comments via YouTube.

“Thanks for the kind words and support. It was fun to do. We definitely didn’t expect this level of reach :). If this brings a smile to people’s faces, mission accomplished!”

Fun Church CoronavirusChurch,Coronavirus,Fun
Comments and feedback can be sent to feedback@ldsliving.com