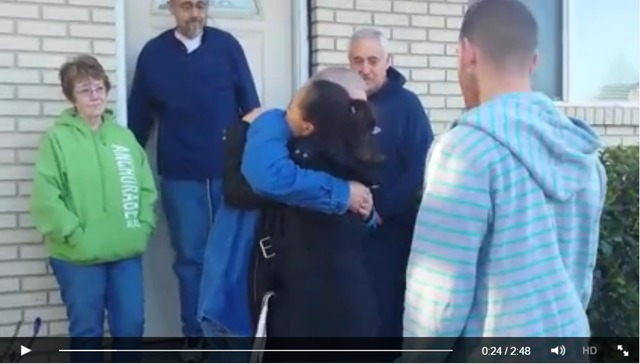 Two hours. That's a long commute, but one that Robert Ford, a school custodian, doesn't have to make any longer.

This October, when Ford missed his ride home from work, he thought the long walk ahead of him would be cold, tiring, and a nuisance. What he didn't know is that that walk would begin a much larger journey that would lead to unexpected blessings that have inspired people the world over.

That same night, Latter-day Saint Sean Merrill happened to be picking up his wife from her job as a school teacher when he saw Ford walking on the road. He offer Ford a ride. Not once, but three times before Ford finally relented. On the way home, Merrill learned more about Ford's story and his long commute—something which he wasn't able to get out of his head.

So Merrill decided to do something about it. The owner of his own auto shop, Nobori Auto, Merrill launched a GoFundMe account and used that money to buy and fix up a car for Ford.

Just before Thanksgiving and the cold weather and holidays set in, Merrill presented Ford with the car. Ford immediately began tearing up. Now, because of a generous stranger, his commute has been cut down from two hours to 20 minutes.

About a month ago, this wonderful couple saw Robert walking home from work. They stopped and gave him a ride and In their words; "We couldn't get him off our minds." They set up a go-fund-me account and collected enough to "find Robert a ride" Sean Merrill is a mechanic, so he got to work and made sure Robert was taken care of. Here's the wonderful outcome. Thanks to Sean and Darilyn Merrill, for their Christ-like charity! ( just to be clear, Robert is my brother-in-law.)https://www.gofundme.com/bx6tp3daPosted by Kathy Ford on Saturday, November 21, 2015

Since that time, this story has exploded, reaching viewers from China to Britain and Sweden.

"This video has been viewed over 54K times on my Facebook page [alone]," said Kathy Ford, Robert's sister-in-law and the person who originally shot and shared the video. "It’s also on YouTube where it has been viewed over 150K times. . . . It’s also been seen on TV stations from Portland to Philadelphia. It’s been featured in two news articles in British papers and one Swedish paper. It’s been on a Chinese website as well. . . . It’s also been shared on Facebook by Ashton Kutcher and by John Tesh."

There's no doubt this simple story of selfless giving has inspired thousands—and it continues to gain attention, as Kathy Ford shared that the Merrills and Robert were all contacted by the Ellen DeGeneres show this week.

As Kathy Ford noted on her Facebook page, "Our video has been seen around the world. I hope that the example of Christ-like love that the Merrills demonstrate is contagious. It could make a difference to a lot of people. Seeing it on a national news station today gives us all hope for good things in the world."