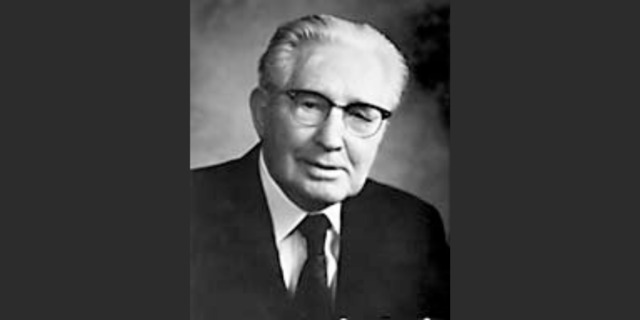 Visitations from the other side: Accounts from the life of President Hugh B. Brown

Editor’s note: The following excerpt comes from a book about special witnesses of Jesus Christ. You can read this chapter in its entirety at truthwillprevail.xyz as well as other chapters as they are posted. This excerpt is republished here with permission.

There are two known narratives of President Hugh B. Brown being visited by Jesus. They are probably largely accurate, though they may or may not refer to the same visitation. One includes some odd wording that may be in error.

One account was written by President Brown’s nephew, President N. Elden Tanner, in his diary, but no date is given other than it occurred after Elder Brown had been back in the Quorum of the Twelve for some time. President Tanner recorded: “He said it was not a vision, but the Lord appeared to him, very informal, the same as I was sitting talking to him. The Lord said, ‘You have had some difficult times in your life.’ Uncle Hugh responded, ‘Yes, and your life was more difficult than any of us have had.’ In the conversation Uncle Hugh asked when he would be finished here, and the Lord said, ‘I don’t know and I wouldn’t tell you if I did.’ Then He said, ‘Remain faithful to the end, and everything will be all right.’”1

Obviously Elder Brown was worthy of such a visitation. But for the resurrected Lord Jesus Christ to say, “I don’t know” is contrary to all the revelations which teach that God “knoweth all things, and there is not anything save he knows it.”2 So we cannot be sure this visitation account has been accurately preserved.

The second (shorter) account, also undated, found in President Brown’s memoirs, relates that, “One night he dreamed he was in the Savior’s presence. No words were exchanged. He said none were necessary. ‘His love enriched me, and I felt his understanding acceptance of me despite all my imperfect ways.’”3 Since there was conversation in one narrative but not in the other, it is probable that they relate two separate appearances to this humble, faithful Apostle.

These same memoirs inform us that on occasion, Elder Brown experienced sacred dreams in which he was visited (from the spirit world) by the spirits of old friends from his past: Stayner Richards, Marvin O. Ashton, and Harold B. Lee. While we are aware of no further record of the first two names, we do have more about Brother Lee. Dr. Russell M. Nelson, before he became an Apostle and then President of the Church, related his witness of what Elder Brown said to him in his autobiography:

When President Kimball extended an invitation to President Brown to attend the dedication, he indicated that due to his advanced age and feeble condition, he felt he could go only if a doctor went along. Fortunately, I got that assignment, . . . My responsibility was to be available for whatever President Brown might need. I checked him each night and morning. . . .

On the morning of the temple dedication, President Brown greeted me with the news that he had been visited during the night by President Harold B. Lee (President Lee had died the year before). He described it as a glorious visit, one that meant much to him, . . .

Later that morning, as we took President Brown to breakfast, Sister Harold B. (Freda Joan) Lee approached us. As we exchanged greetings, President Brown said to her, “I had a glorious visit with Harold last night. He is just fine. It was so good to visit with him.”

This was such a moving experience for us all. We felt the presence of President Lee’s spirit in the temple through the witness of President Brown.4

The Washington D.C. Temple dedication occurred in November 1974 and Elder Brown viewed it as the culmination of his mortal ministry. In his remarks on that occasion, he again avowed his special witness:

“My brethren and sisters, with all the earnestness and solemnity of my soul I say to you that Jesus of Nazareth is the Son of the Living God, our Redeemer, who won and made the atonement for us. . . . I am glad to make this declaration to you this day because in the ordinary course of events it will not be my privilege very long to declare these things on this earth. . . . When Peter replied, ‘Thou are the Christ . . . ,’ the Savior said: ‘Blessed art thou, for flesh and blood hath not revealed it unto thee, but my Father which is in heaven.’ From the same source and with the same authority that he spoke, I declare unto you that I know that He is the Christ. . . . I am very grateful that in the course of human events I have been led into circumstances and conditions where I have had to defend the truth even without wanting to save my own life. And now, rather than deny it, I would ask Him to take my life. . . .’”5

Elder Brown lived little more than a year after uttering those words.

Though his opportunities to declare his special witness diminished as he grew older and more incapacitated, he still found occasion to bear testimony and did: “I want to tell you, my brethren and sisters, as is my calling as a witness of Christ, that I too know, and I know it from the same source that Peter knew it, for flesh and blood have not revealed that knowledge unto me, but our Father which is in heaven. And from the bottom of my heart I say to him and to you, . . . , ‘Thou art the Christ, the Son of the living God,’ and I know it as I know that I live.”6

Read this chapter in its entirety at truthwillprevail.xyz.