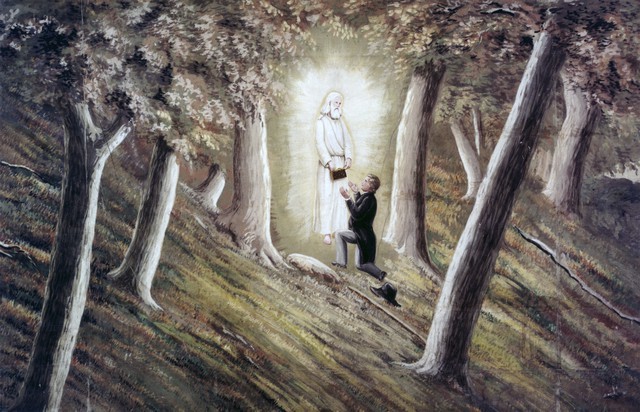 Was Joseph Smith Visited by the Angel Nephi?

As the Church's historical topic essay on Moroni states,

Joseph’s 1832 history recounts that the Lord “shewed unto me a heavenly vision for behold an angel of the Lord came and stood before me ” (Joseph Smith, “History, circa Summer 1832,” in Letterbook 1, 4, josephsmithpapers.org). These and other early accounts referred to this messenger simply as “the angel.” In 1835, Joseph identified the angel as the Book of Mormon figure Moroni in a revelation published in the Doctrine and Covenants (“Revelation, circa August 1835 [D&C 27],” Historical Introduction, josephsmithpapers.org). His clearest statement on the angel’s identity appeared in an 1842 letter to the Saints: “And again, what do we hear? Glad tidings from Cumorah! Moroni, an angel from heaven, declaring the fulfillment of the prophets﻿—the book to be revealed” (Joseph Smith, “Letter to ‘The Church of Jesus Christ of Latter Day Saints,’ 6 September 1842 [D&C 128],” 7, josephsmithpapers.org).

These accounts left no ambiguity as to the identity of the angel, but one key document complicated the picture. The earliest manuscript of the canonized account of Moroni’s visits (Joseph Smith—History 1:30–53) refers to the angel as “Nephi” (Joseph Smith, “History, 1838–1856, volume A-1 [23 December 1805–30 August 1834],” 5, josephsmithpapers.org). This reference likely originated with Joseph Smith’s clerk James Mulholland, who began in 1839 to combine various manuscripts of Joseph Smith’s history into a single narrative. Evidence suggests Mulholland did not take dictation from Joseph Smith but rather worked from sources available to him that have not survived. Mulholland could easily have been confused about the identity of the angel since many of Joseph’s earlier accounts before Mulholland’s draft did not mention the angel’s name.

Early published versions of Joseph Smith’s history, as well as other accounts that mention an angel “Nephi,” all relied on Mulholland’s draft. As a result, both “Nephi” and “Moroni” appeared in publications during the 1840s and 1860s. Brigham Young suspected the history contained a clerical error and assigned Church historians to research the issue. Reviewing Joseph Smith’s other accounts of the angel, they concluded that the name “Nephi” should be replaced with “Moroni” and wrote a correction on the Mulholland manuscript itself (Joseph Smith, “History, 1838–1856, volume A-1 [23 December 1805–30 August 1834],” 5, note 14). No evidence indicates that Joseph Smith ever called the angel “Nephi.”

Church leaders later clarified this point in our Church history. In a talk to the Fourteenth Ward in Salt Lake City, Elder John Taylor said, “The Angel Moroni came to him and revealed to him the Book of Mormon. . . . And then came Nephi, one of the ancient prophets, that had lived upon this continent, who had an interest in the welfare of the people that he had lived amongst in those days" (Journal of Discourses, 21:161, 163).

In fact, Nephi was one of the dozens of angels who visited Joseph Smith, instructing him and conferring keys. Elder Wilford Woodruff said that Joseph Smith “was taught for years by visions and revelations, and by holy angels sent from God out of heaven to teach and instruct him and prepare him to lay the foundation of this Church” (in Journal of Discourses, 16:265).

Lds.org lists Lehi among the prominent Book of Mormon prophets to visit Joseph Smith while Elder George Q. Cannon specifically mentions Alma as a heavenly visitor who instructed the Prophet: "If you will read the history of the Church from the beginning, you will find that Joseph was visited by various angelic beings, but not one of them professed to give him the keys until John the Baptist came to him. Moroni, who held the keys of the record of the stick of Ephraim, visited Joseph; he had doubtless, also, visits from Nephi and it may be from Alma and others" ("The Right and Authority of the President Brigham Young," (5 December 1869) Journal of Discourses 13:47).

Tasked with translating an ancient, sacred record, establishing Christ's church in a new dispensation, restoring priesthood keys, spreading the gospel throughout the world, and many other daunting tasks, it is little wonder angels and the help of heaven were near Joseph throughout his entire life. As William Taylor declared, "He seemed to be just as familiar with the Spirit World, and as well acquainted with the other side, as he was here" (“Joseph Smith, the Prophet,” Young Woman’s Journal 17 (Dec. 1906): 548).