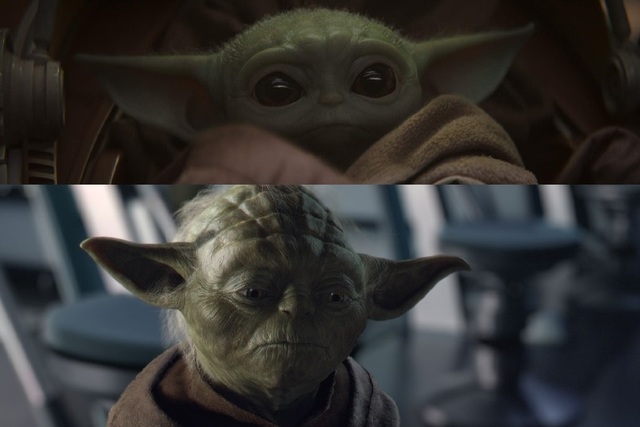 With the final movie of the Star Wars saga coming to theaters this weekend and the craze of "Baby Yoda" from the new Disney+ The Mandalorian series sweeping the internet, we thought it would be fun to share some of the Latter-day Saint connections to this sci-fi classic. A previous version of this article was originally published in 2016.

Whether you've been religiously watching The Mandalorian on Disney+ each Friday and can explain the backstory of each character from memory or you barely recognize the name of Luke Skywalker, you've likely not escaped the flood of images starring "The Child," a.k.a. "Baby Yoda," which increased the hype leading up to Star Wars Episode 9: The Last Jedi. The Mandalorian's tiny, innocent replica of the beloved Jedi master has put Star Wars on everyone's brain and found a special place in everyone's hearts as only a baby—or a wrinkled, wise old Jedi—can do. And while we still don't know the baby's connection to his ancient and familiar look-alike, Yoda, it did remind us of an old Latter-day Saint myth and a few other gospel connections to this popular sci-fi series.

Any discussion of Latter-day Saint connections in Star Wars has to begin with the old legend that Yoda was modeled after Latter-day Saint prophet Spencer W. Kimball, who was passably similar in appearance and mannerism. Though the comparison likely began as a joke, the speculation gained traction in Latter-day Saint circles over the years. However, the hypothesis has been flatly denied by people who worked on the film—the true inspiration for Yoda was Albert Einstein. It's also widely documented that Lucas drew from several philosophies and religious traditions while making the films, including Zoroastrianism, Taoism, Buddhism, Manichaeism, and Stoicism.

It may come as more of a surprise that though Star Wars's creator, George Lucas, is a self-described Buddhist Methodist, its original producer, Gary Kurtz (who passed away in 2018 at age 78), was a practicing Latter-day Saint. And despite lacking the name recognition of Lucas, Kurtz is a film legend in his own right. He produced American Graffiti in 1973, Star Wars and its sequel The Empire Strikes Back in 1977 and 1980, The Dark Crystal in 1982, and Return to Oz in 1985. For his work on Star Wars and American Graffiti, he was nominated for the Academy Award for Best Picture.

And though the storied Star Wars franchise was influenced by a variety of philosophies and religious traditions, it does contain several similarities to Latter-day Saint theology that were possibly influenced by Kurtz's religious background. Here are a few that stood out to us:

Perhaps the strongest similarity is with the Force. Obi-wan Kenobi said that the Force "is what gives a Jedi his power. It's an energy field created by all living things. It surrounds us and penetrates us; it binds the galaxy together." Compare that statement to the one made by President Gordon B. Hinckley about the priesthood (another Yoda-like prophet—especially with the cane) in 1984: "There is no power on the earth like it. Its authority extends beyond life, through the veil of death, to the eternities ahead. It is everlasting in its consequences."

Latter-day Saints believe that the priesthood was the power by which the earth and heavens were created, and therefore, a holder of that priesthood has power to heal the sick, raise the dead, and even move mountains.

The Force, is, however, also comparable to another Latter-day Saint concept—the Holy Ghost. As the power that unifies the Jedi, it isn't exclusive to one race or gender, but only those who learn to use it properly and practice listening to it reap the benefits of its constant guidance. Likewise, the Spirit of the Lord is available to every human being, but only those who are baptized and confirmed and practice listening to that Spirit can have it's constant guidance as promised.

Star Wars, like Latter-day Saint theology, portrays mankind as infinitely greater than the fallen worlds on which we live. "Luminous beings are we," said Yoda, "not this crude matter." Of course, a central tenet of the gospel says that not only was God once a man like us but that we, through our Savior Jesus Christ as well as our own faith and desire, can eventually become divine. As the prophet Lorenzo Snow famously said, "As man now is, God once was. As God now is, man may be."

President Dieter F. Uchtdorf recently spoke to the divine destiny of man. "There seems to be something inside of us that resists endings," he said. "Why is this? Because we are made of the stuff of eternity. We are eternal beings, children of the almighty God, whose name is endless and who promises eternal blessings without number. Endings are not our destiny."

Though not found in an episode Gary Kurtz produced, there is a famous Yoda quote: "Fear is the path to the dark side. Fear leads to anger. Anger leads to hate. Hate leads to suffering." This advice famously led to (SPOILER ALERT!) the downfall of Anakin Skywalker and the creation of Darth Vader when it was not heeded. However, when it was heeded by his son, Luke, in episode six, it ultimately led to the overpowering of evil.

We hear often in the Church that faith is the antithesis of fear. Just remember the story of Peter walking on water! Elder Quentin L. Cook said in a 2007 conference talk, "When we choose to follow Christ in faith rather than choosing another path out of fear, we are blessed with a consequence that is consistent with our choice." As Elder Cook points out, we've seen the consequences of fear, anger, and hate in our current world. But if we can choose to have faith and fight for the good, eventually Satan will no longer have power over us.

But it doesn't stop there. The Jedi receive special training and instruction in "temples." They're also led by a council of 12 of the most experienced Jedi. These members meet together frequently and are also often traveling the galaxy, working together for good and fighting the evil Sith Lord who uses deception to find supporters even in circles close to the Jedi. Sound familiar?

And though the specific similarities between the gospel and Star Wars go on and on throughout the series, the overarching similarity to Christianity is the most powerful gospel connection—a battle between good and evil where good will, eventually, triumph.