Watch: Church film producer shares how he learned to love his mother again

Brian Faye has been a full-time film producer for the Church for the past seven years. His writing credits include "The Hope of God’s Light," several of the Book of Mormon videos, and "Suicide Prevention: Choose to Stay." His most recent video, however, published May 28, 2020, took a direction he wasn’t expecting.

“I sat down to write a video script about Mother’s Day for work. When I started writing the script, I had no intention of making it autobiographical, as I’m actually a deeply private person. But soon I was writing in the first person, unable to stop what was coming out,” Faye said in a post accompanying the video.

His video script ended up sharing the story of how "the deepest, hardest ice" around his heart began to melt. When Faye was a teenager, ice began building between him and his mom as they frequently argued over his decisions. That ice grew when Faye's parents divorced while he was on his mission. Faye’s father then died six months after the divorce and four months after that his sister suffered a traumatic brain injury. These experiences affected Faye’s perception of his mother and consequently their relationship.

“For the next 18 years, my mother and I butted heads constantly. As the years wore on and she dealt with her trials, all I could see were the things about her that annoyed me. Instead of appreciating what she’d been through and how desperately she was trying to cope, I chose to focus on how poorly I thought she was doing. My pride and impatience grew and, with it, my desire to be distant,” said Faye. 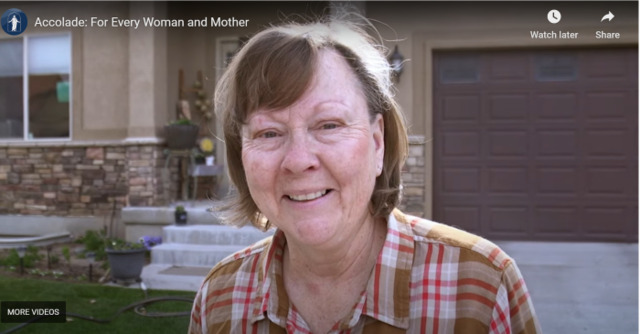 That distance remained until an unexpected conversation with his mom began to change Faye’s perspective. Mother and son were eating takeout together in the car when Faye’s mother began to talk about her childhood. She had grown up in a tough home where she struggled to find a sense of self-worth. Faye had heard these stories before, but this time they hit him differently.

It was a few days after that realization that Faye sat down to write the Mother’s Day script that somewhat unintentionally became about his own mother. Without waiting to pitch the script, Faye set to work incorporating old home videos into the edit.

“And it was while I made the video that the walls I’d built around my mother finally came down. As I digitized our old home videos and incorporated them into the edit, I broke down in tears over and over,” said Faye. “All I could see in the images was my mom, young and vibrant. Always with a baby in her hand or always tired. All I could see was a woman who, despite her difficult life, had somehow made something out of nothing. She was like a beautiful rose that had grown up through an unsightly crack in the pavement.”

Faye used his film expertise to portray his change of perspective beautifully. The finished video is a reminder that the Lord is involved in family relationships and He can help us learn to love again.

Read Faye's full post on ChurchofJesusChrist.org. Watch the video below.

All images are screenshots from the video.

Mothers DayMothers Day,
Comments and feedback can be sent to feedback@ldsliving.com