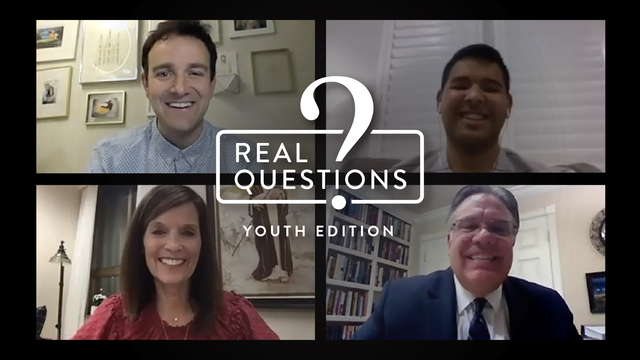 Watch: Sister Craven and Brother Wilcox answer the question, ‘Is it bad to participate in the Church out of a sense of duty?’

Colby is a teenager approaching adulthood and he has a question: Is it bad to participate in the Church out of a sense of duty?

“It seems like there’s a set plan that we’re supposed to follow: Mission, BYU . . ., marriage, and children, in that order. It just seems like a wall of expectations that you’re supposed to climb and if you don’t quite measure up to that then there’s something wrong with you or you’re not as strong in your testimony as you should be,” Colby explains.

His question is a part of the Real Questions series. Two special guests join host David Butler and Colby in hopes of providing thoughts that might be helpful to Colby in his search for answers.

“The one who knows the answer for your plan is Heavenly Father. Heavenly Father knows your plan and it’s kind of a one step at a time,” Sister Becky Craven, Second Counselor in the Young Women General Presidency, began, before posing another question: “What is the opposite of ‘have to’?” She explains that the opposite of “I have to” is “I love to” but that it sometimes takes us a long time to move from having to do something to loving to do something.

Brother Brad Wilcox, Second Counselor in the Young Men General Presidency who also joined in the call, took the analogy a step further by asking Colby if there is anything in his life that he has grown to love over time. Colby said mushrooms explaining that he used to just eat them to be grateful and finish all of his food at dinner, but now he loves them.

“I think it’s the same way in the Church sometimes. We do things at Church because we feel like we have to, like Sister Craven said, or sometimes in the Church, it’s just out of social pressure . . . but then when you do it because you have to or because you should, somehow that can grow into loving it,” Brother Wilcox told Colby. He then explained that what has helped him personally grow from not liking something to loving it is “seeing beyond the activity itself.”

Colby’s reaction to Brother Wilcox and Sister Craven’s thoughts may be the best part of the video as the teenager sincerely says that he was amazed “how shockingly simple the answer is.”

“I’m kind of taken aback because my question kind of comes out of frustration of such a complex stage in life and a complex future that I want to have but the answer is so simple,” Colby said.

Watch the full video and find more from the special youth edition of “Real Questions” on YouTube.