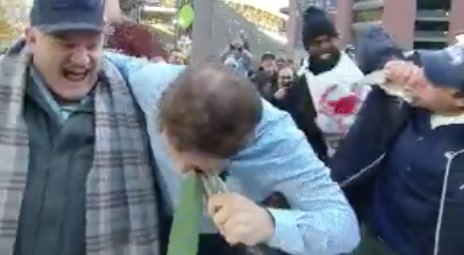 Watch: Steve Young Bites the Head off a Fish on Live TV... Wait, What?

For reasons that are still not fully understood, Steve Young bit off the head of a fish on live TV last night.

The former '49ers quarterback and ESPN analyst was on live TV for the Seahawks vs. Falcons pregame show at the Pike Place Market in Seattle when a Seahawks fan grabbed a fish yelling, "I’m a Seahawk! I eat Falcons for breakfast!"

He then did the hygienically unthinkable and bit off the head of the fish.

Surprisingly, Young also grabbed a fish and, after some struggle, also bit off its head.

The video of the whole thing was posted on Twitter by ESPN, and the Steve Young fans went nuts.

Steve young was a predator on the field scoring TD's apparently still a predator!!😱😂🤣

Warning: If you hate sushi, this video is not for you.