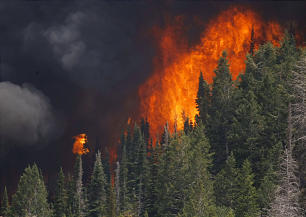 A deadly combination of intense summer heat and dry terrain has resulted in a massive outbreak of wildfires throughout the American West threatening land, homes and lives of people in the endangered areas.

According to firewhat.com, each state in the Western region, with the exception of Washington and Oregon, is suffering from at least one wildfire, some with as many as nine fires burning within state boundaries.