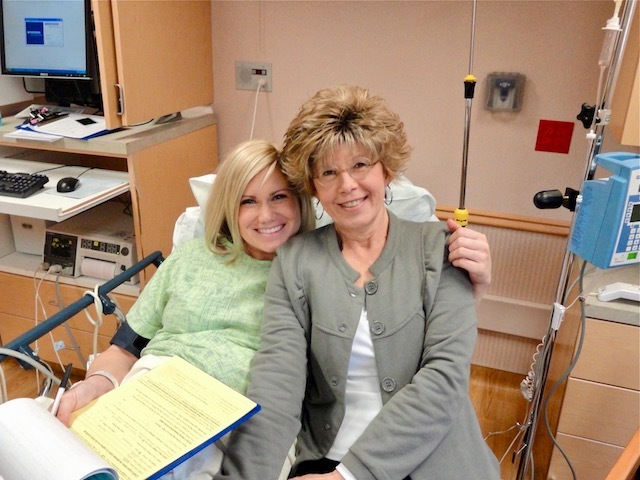 In the span of just a few minutes, Brooke's mother had tried to reach her multiple times, calling incessantly.

But there was little Brooke, one of three members of the singing group Mercy River, could do. She was in a conference call with the two other members of Mercy River, Soni and Whitney, discussing their upcoming tours. Besides, Brooke says on an episode of the This Is the Gospel podcast, it wasn't unusual for her mother to call and call and call until someone picked up.

"So I finally texted her and just said, 'Hey, I am on a conference call, I'll call you back as soon as I'm done,'" Brooke says. "And I sent this text, and as soon as I sent the text, she called again."

That was not like her mother. Worried, Brooke called back. But instead of her mother's voice coming through the speaker on her phone, Brooke's father answered. He told Brooke her mother had stopped breathing.

A few days before, Brooke's mom had been diagnosed with the flu. But it hadn't seemed like a serious illness at the time.

Brooke only lived five to seven minutes away from her parents' home and decided to meet her father there as an emergency medical team worked to revive her mother. On the short drive over, Brooke says she was concerned for her mother and prayed for her the whole way there. But the thought that her mother wouldn't recover never crossed her mind.

And when she pulled into her parents' driveway and saw EMTs loading an empty gurney into an ambulance, she thought all was well. If they didn't need a gurney, then her mother must be inside.

But when Brooke walked into her parents' home, her father was sitting all by himself.

"And my dad was standing there with the most blank look and said, 'There's nothing they can do. They couldn't do anything.' And I just froze. I couldn't believe this was actually happening," Brooke says.

Only a few days before, this woman who was so full of life had been playing with Brooke's children, being the kind of mother and grandmother who always "showed up" to her grandchildren's games, plays, and performances. The kind of woman who would hug strangers if she thought they were having a rough day. The kind of Young Women leader who would give a girl flowers after their sister moved away to college. The kind of mom who would always be willing to listen to Brooke's worries.

And now, she was gone.

But even as the days and weeks added more and more weight to that crushing reality, Brooke still hoped that she would continue to feel her mother's presence in her life. That's because, in the past, Brooke had felt the presence of her ancestors in her life. In particular, Brooke says she often felt the comforting presence of her great-grandmother, the only other singer in her family that Brooke was aware of, before performing on stage.

"I don't know how to explain the feeling. I don't see her or hear her. I just know she's there," Brooke says. "Even times before I'm going to go on stage and I'm nervous, I felt my great-grandma with me. You know, she's a singer so she knows what it's like to step on a stage and be nervous."

And when Brooke's youngest child was born, Brooke says she had a unique experience as well. The delivery had been a difficult one, so much so that doctors had feared for the life of Brooke and her baby, and Brooke had been sedated.

As she woke, she said she could feel the love of a group of people she couldn't see.

"And I just kind of sat there thinking, 'Who else is here?'" Brooke says. "And the room was just filled with love, a bigger love than can be contained in just the two people that were there. And, even from that moment, I've always felt like my youngest, Claire, belongs to a collective group of people. I just get to be her mom here. "

And just before her mother's passing, Brooke had the impression to research as much as she could about angels, which seemed to be the perfect preparation for her to feel her mother's presence in her life.

"Having had those experiences, I had an expectation that I would have the same experiences with my mom," Brooke says. "And my patriarchal blessing even talks about angels and that the presence of my loved ones will be very important to me in my life. I expected my mom to come and visit me just the way I had been visited in the past."

But, she didn't. Brooke never felt the presence of her mom like she had other angels in her life. Instead, Brooke was plagued by reminders of her mother. Triggers that came up unexpectedly to remind her exactly what she was missing.

"It sounds so funny, but she loved Downton Abbey," Brooke says about her mom. "She thought she was British. We always laugh like, 'You're not British, Mom.' But she thought she was British so she loved Downton Abbey. It was her ringtone on my phone. And after she passed away, you know, the show is not on anymore, and I was sitting in the movie theater just a couple months ago and the preview for the new movie coming out came up. The second I heard the music, it was just, just waterworks. You know, I don't expect to be sitting in a movie theater crying about a song that represents my mom."

Over time, Brooke says she became angry. Why would she feel the presence of her ancestors she had never met, but not her mother?

And one day when the pain of missing her mother was particularly overwhelming, Brooke asked God why she had had all these experiences with angels she had never met, but the one she wanted to feel the most was absent from her life.

"I was in the car driving and I was praying out loud and I asked Him, 'Why? Why have you let me have all these experiences and gained such a testimony of angels and their existence and their involvement, how close they are. And I've been led to so much study and pondering and praying about the subject of angels. Why have you not let me feel my mom?'" Brooke says. "And it was a really clear moment, a really clear answer that came to me and it's, I don't have a lot of those in my life. . . . And He said, 'I had to come to that knowledge, I had to study all of this so that you would know she was there even when you don't feel her.'"

That answer was a turning point for Brooke. Instead of looking for her mother in her own life, she began to see how her mother was working through others.

Like when a friend had a strong prompting leave a family party and begin painting a picture for Brooke.

"And she said, 'I felt like somebody took my hand and the paintbrush and painted this,' and had a painting out in 10 minutes," Brooke says. "It's a painting of an angel, which she didn't know that that's my love. You know, I have an angel wall in my office and the colors that she used were all the same colors on my wall and the angel looked just like my mom. Big hair, you know, and she's never met my mom. "

Or when a neighbor had a strong feeling to buy Brooke an angel figurine, even though she wasn't sure why.

Much like in her life on earth, Brooke's mother was blessing as many people as she could—including Brooke. It just wasn't in the way Brooke had anticipated to feel her mother in her life.

But there were still moments of grief where Brooke longed to talk with her mother. Where she wanted more than anything to ask her mother for advice, to get reassurances about her mothering.

"My mom was really good at telling me I was doing a good job," Brooke says. "I can't talk to my friends about that because we're all, everybody's in the trenches together. We all think we're a horrible mom. All of us think we're ruining our kids. But my mom was out of the trenches and could tell me from a different perspective I was doing okay. And I remember praying and saying, 'I miss my mom being here to tell me I'm doing a good job.' And the Spirit said, 'Well, I can tell you you're doing a good job.' I thought, 'Oh, of course, why don't I just go to Christ? Why don't I tell Him everything?'"

It's been over a year and a half since her mother's death, and Brooke says she still hasn't felt her presence in her life like she has other angels.

Instead, Brooke says she's seen her mother in different ways and has found that this has led her to a stronger relationship with her Savior.

"So even though I can't feel my mom, or even sometimes I don't know if she hears what I was saying, He does," Brooke says. "Christ knows how I feel. He knows what I'm saying. He hears my thoughts. And if there's something that my mom needs to know, He'll make sure it happens. And I trust that."

Listen to the full episode "Angels Among Us" below or click here to view show notes and the transcript for this episode.