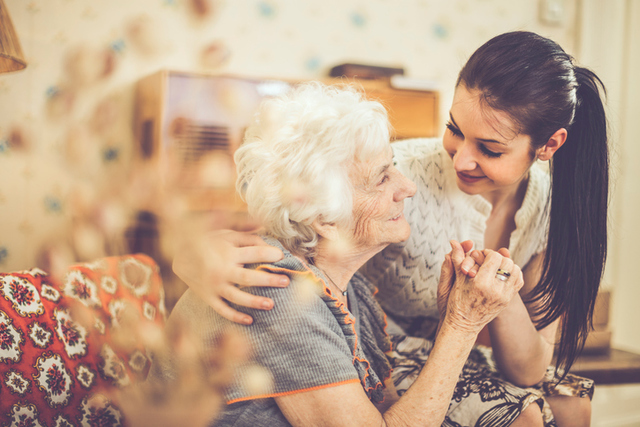 The following article previously ran on LDS Living in December 2015. 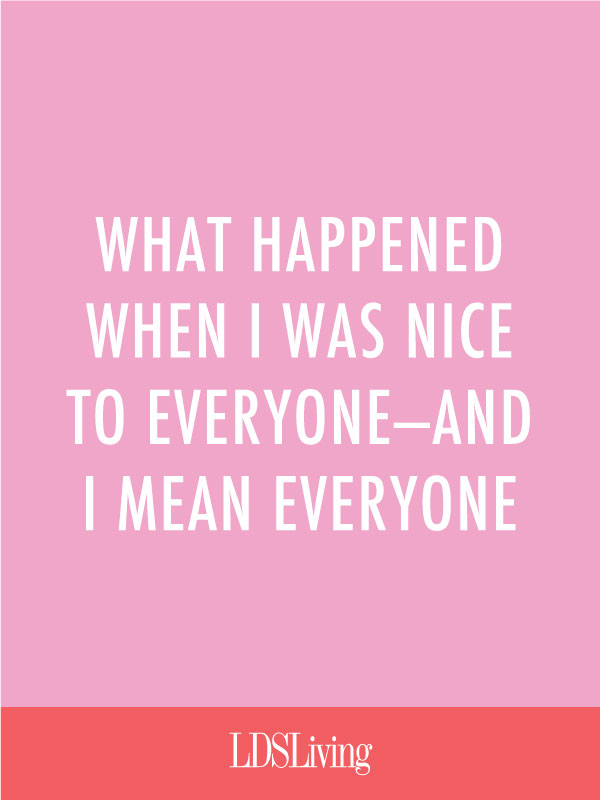 I've often thought it would be fun to conduct human behavioral experiments. So I decided to do it—and I found out just how far kindness can go in changing people's outlook.

I first tried my behavioral experiment on my cousin's co-worker (we all worked for the same corporation). This lady was mean. She scowled, she glowered, and when she came by, people quickly made way. They avoided her and she avoided them. In addition, when she made conversation, it was negative; she griped and complained. My cousin said, "The lady is smart, but even her humor has a bite in it. She works hard and she knows what she's doing, but she's so sarcastic." My cousin really didn't like her much.

So when I ran into her in the company cafeteria, I said, "Hi, Nadine, isn't it? (Names have been changed to protect the guilty.) You look nice today. Purple is a good color for you." She wheeled around on her heel so fast that I was looking for the exit. She looked at me searchingly, as if to see if I was making fun of her or something. I kept my smile pasted on. After a long pause, she smiled and said, "Thank you."

The next time I ran into her, I said, "You work with Karen, don't you? She really likes you," I lied. She looked at me with surprise. "She does? What did she say?" "Well," I said slowly, thinking hard, "She really gets a kick out of your sense of humor." I waited a week or so then invited my cousin over for dinner. "How are things going with Nadine?" I asked casually. "Oh, you know," said Karen, "she's turned into the nicest person. She even helped me with a project." They actually became great friends!

The subject of my next experiment was the lunchroom lady. She was a small, wizened woman with frizzy hair and no makeup. She never smiled and would pounce on people wanting a plastic spoon for their sack lunch. "That belongs to the cafeteria," she'd bark. "You need to pay for that." I was delighted—she was perfect!

The next time I was in line, I held a dollar out. "What's that for?" she asked looking worried. Had I taken something she hadn't seen? "It's a tip." "Tip?" she scoffed. "People don't tip in a cafeteria." "I do," I said firmly. "What for?" she asked, disbelievingly. "You never make a mistake with my change," I said. "Besides, this place couldn't be paying you that much." "Thank you," she stammered, and just for a split second she flashed a smile that bathed her entire face in sweetness. This was getting heady!

One day I didn't get lunch until late, but she rousted out the cook to fix up something for me. While I was waiting, she was wiping down tables. "You know," she said thoughtfully, "the past year and a half has been really rough. First, my husband of 26 years left me for a much younger woman. Then my mother passed away, and one of my sisters died of cancer." She paused, then leaned over and whispered, "You made me remember there's still some good in the world." I wiped my eyes and after eating returned to my co-workers. I explained to them what I had been told, and they admitted the lunchroom lady had been a source of jokes. Lately, they noticed she was friendlier and wondered why. We were all rather ashamed of ourselves.

A couple of years later, the lunchroom lady retired. There were three large cakes, completely eaten by all her friends, and it took two boxes to cart all her gifts home. Some of the most prominent management types in that company could not boast a more enthusiastic celebration.

A Test of Testimony

A few days into this test, I was rushing to a baby shower with the cake in the backseat of my car. My mind was on a hundred details when a man stepped out from behind a bus and directly into my path. I slammed on the brakes and then immediately heard the sound of the cake container slapping the back of the passenger seat and the soft, mushy thud as it settled back again. Shocked, I nevertheless remembered the challenge and said to myself, "I'm sure glad I didn't hurt that man!" We repaired the frosting at the shower, laughing over my experience. After cutting the cake, the damage wasn't even noticeable.

As time went on, I became amazed at the energy required to keep up such a mind frame. Everywhere you go, so little of what you hear people say is kind and loving. It is very easy to fall into the trap of repeating critical phrases. A day before the experiment ended, I found myself in the grocery store line behind a man who was obviously having a bad day. He fussed at the box boy for the way he packed the groceries. He even wanted bulk items in clear bags to be placed into his paper sacks a certain way. The clerk shot me a look as if to say, "Can you believe this guy?"

Still in the loving frame of mind, I noticed a bouquet of exquisite flowers. "Say, those are beautiful flowers you have there," I offered in a calm, light voice. His tightened shoulders relaxed and he replied, "Yes, they are. Thank you." Suddenly, he must have caught himself because he spoke to the clerk and said, "Today was my first time for kidney dialysis. It was hard." He turned to me and said slowly, "Everything is hard."

His eyes glistened and a smile touched his lips as he parted with, "Thanks. I need all I can get." The clerk looked at me after he was gone and said, "You never know, do you?" The atmosphere had changed from hurried, tense, and frustrating to calm, gentle, and peaceful. Everyone involved, from the box boy to the clerk, seemed to bask in a warm glow.

So, look around. I'll bet there is someone in your neck of the woods just itching to be made the subject of an experiment in kindness by you.