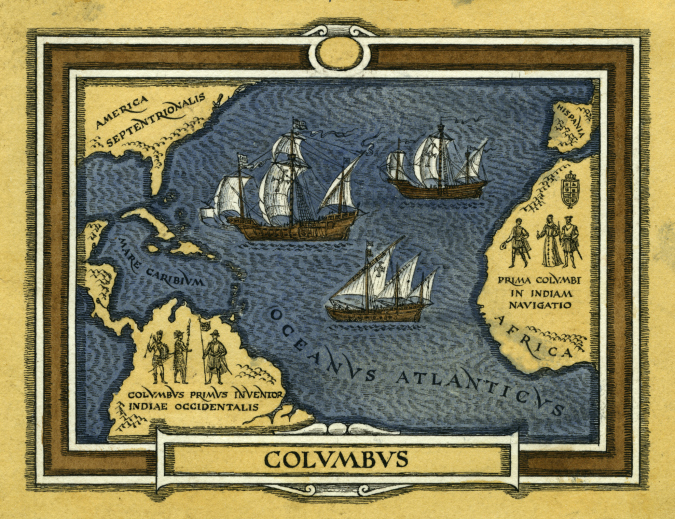 byClark B. Hinckley, excerpted from "Christopher Columbus: A Man Among the Gentiles" | Oct. 08, 2018

At noon on the Ides of March, 1493, a small wooden ship rode the rising tide up the Río Tinto and into the harbor of Palos, Spain. She wasn’t much of a ship—her deck was only about 55 feet long. She was weathered but solidly built and appeared to be newly caulked. She was named the Santa Clara, but was usually called the Niña after her owner, Juan Niño of Moguer. The Niña had last been seen in Palos on August 3, 1492, sailing down the ebb tide with two other ships, the Santa María and the Pinta as part of an attempt to reach the Orient by sailing west across the uncharted waters.

A crowd quickly gathered to meet the crew as they rowed to shore in a small boat. The most momentous sea voyage in history ended where it began, at a small village on the Atlantic coast of Spain. The town of Palos de la Frontera remains relatively unknown, but the name of the Genoese sea captain who returned there is one of the most widely recognized names in history: Christopher Columbus.

“A Man Among the Gentiles”

In recent decades, the story of Columbus has been largely forgotten. He has become not so much a person as a symbol of all that has gone wrong in the modern world. He has become politically incorrect in every way, to the point where on many college campuses, the former Columbus Day holiday has been renamed “fall break.”

When I first read the Book of Mormon as a young teenager, Nephi’s prophecy about Columbus was one of the few verses that I clearly understood:

Years later, as a mission president in Spain, I took all newly arriving missionaries directly from the airport or train station to the top of a large castle that overlooks Barcelona and the Mediterranean Sea. While looking out over the “mission field,” we read together Nephi’s short verse about Columbus, who, like these new missionaries, came to a foreign land with a bold but unpopular idea and found success.

Upon returning triumphantly from his great voyage of discovery, Columbus traveled to Barcelona where King Ferdinand and Queen Isabella were holding court. There, in the old Palau del Rei, he reported to the monarchs on his world-changing voyage. I often visited the small plaza facing the old palace and imagined the silver-haired Columbus, regal as a Roman senator, ascending the steps to greet the monarchs, followed by a parade that included live parrots, exotic Indians, and marvelous artifacts of gold.

It was in Barcelona that I first read a statement by Columbus in which he declared that he was inspired and motivated by the Holy Ghost to undertake his voyage across the sea. I was struck by his declaration of divine guidance, as he seemed to describe the literal fulfillment of Nephi’s prophecy. I became intrigued by this man who is so widely recognized but so little known, and I began to read and research the life of this famous discoverer.

Nephi tells us what Columbus would do—cross the great ocean from the land of the Gentiles to the land of Lehi. That Columbus actually did this is one of the most widely known facts of history. He may not have been the first European to cross the Atlantic, but no earlier voyage had any lasting impact on history.

“Only with Columbus’s undertaking,” wrote the Italian historian Paolo Taviani, “did Europe, Islam, India, China, and Japan learn of the existence of a New World. And that changed the course of human history profoundly.”2

While everyone knows what Columbus did, why he did it is the subject of much speculation and argument among historians. Where did the idea come from to reach the East by sailing west? Why did he continue to persist with such unwavering conviction after his proposal was rejected time and again in both Portugal and Spain? When his proposal brought him ridicule and rejection, why did he keep insisting that he could, and would, cross the ocean? And why was he so unshakably certain that he could do what no one else had done and what everyone else thought was impossible?

Nephi tells us why Columbus sailed: “I beheld the Spirit of God, that it came down and wrought upon the man.” And while historians may debate Columbus’s motives, from his writing it seems that Columbus himself knew why he did what he did:

"With a hand that could be felt, the Lord opened my mind to the fact that it would be possible to sail, and he opened my will to desire to accomplish the project. . . . This was the fire that burned within me. . . . Who can doubt that this fire was not merely mine, but also of the Holy Spirit . . . urging me to press forward?"3

Although Columbus never had access to Nephi’s prophecy—during his time, it was written in an unknown language on gold plates buried in a hill on a continent that Columbus was yet to discover—his words leave many convinced that he thought his voyage was the fulfillment of prophecy:

"The Lord purposed that there should be something clearly miraculous in this matter of the voyage to the Indies. . . . I spent seven years here in [the] royal court discussing this subject with the leading persons in all the learned arts, and their conclusion was that all was in vain. That was the end, and they gave it up. But afterwards it all turned out just as our redeemer Jesus Christ had said, and as he had spoken earlier by the mouth of his holy prophets."4

Perhaps the most remarkable aspect of the life of this remarkable man is how much it seems he truly understood his prophetic mission and his place in history.