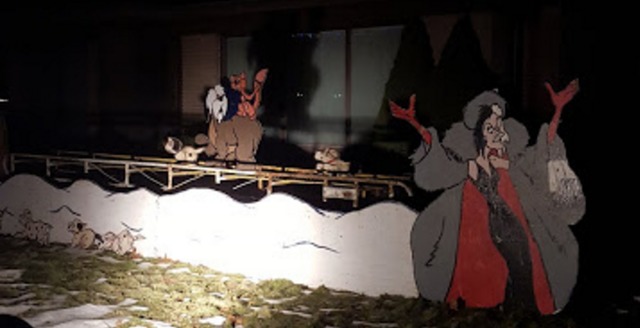 When I was a little girl, my parents would pack all of us into our winter coats and then into our family Suburban to drive around town and look at Christmas lights. It became a sort of tradition for us. We'd drive up to the benches with the biggest houses, decked in wreaths and bows and hosting little candles in every window; then we'd wind our way down city streets where the Christmas displays were smaller, but often more outlandish and colorful. To us, every lit up house was something magical.

I remember one house in  particular that was the most magical of all of them. It was a ranch house that sat just north of historical Preston, Idaho. We'd drive for about 45 minutes from our house to get to it, but you could see it well before you got to it. Not only was it covered in Christmas lights that stretched high into the trees surrounding it, but the house was covered in Disney characters.

Stationed on every patch of ground around that house were wooden characters that had been meticulously cut, painted, and propped up to form scenes straight from movies. Simba, Rafiki, Nala, and Scar stood in one corner of the yard, and Belle and the Beast spun around on a mechanized wheel in the other. The Grinch was on the roof of the house, his wooden arm creaking up and down to crack a whip against his poor counterfeit reindeer, while little wooden puppies traveled along a metal conveyor into the clutches of Horace and Jasper in the front yard.

Everywhere you looked, there was a different character doing a different thing -- Toy Story, Lilo and Stitch, Cinderella, you name it! I'd roll down my window and lean far out of the car as we moved around the circle drive so I could see every single character. It was the most magical thing I'd ever experienced.

Read the rest of this story at igobyari.blogspot.com