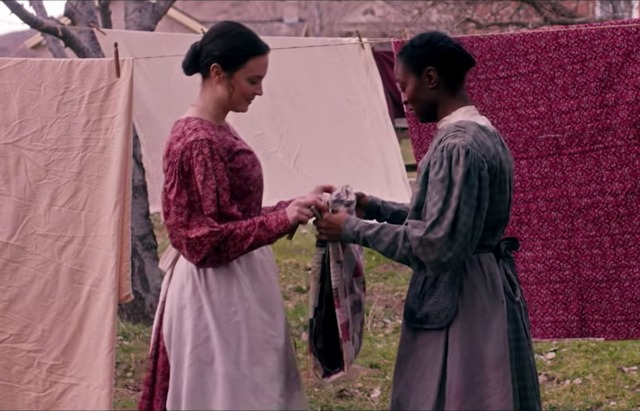 When asked, “Who was Jane Manning?” in an interview on NPR's the City Lights, Danielle Deadwyler, who plays Jane in a groundbreaking film about Jane's life, confidently and proudly said, “Jane Manning was a woman of fierce conviction.”

Deadwyler isn’t a Latter-day Saint herself, but the way she speaks of Jane Manning and others shows her love and respect for the characters in the movie and their stories. She spoke of how Jane was one of the first African Americans to join the Church and moved her family to Nauvoo from Connecticut after having a vision that it was what she needed to do.

Deadwyler mentioned that Jane wanted so badly to participate in the Church in Nauvoo and was ready to make the trek there “because God told her to.” Deadwyler said, “She came upon the prophet Joseph Smith and she said she saw him in a vision. When she got there she knew who he was.”

But even after arriving in Nauvoo, the social climate continued to be a problem. Deadwyler noted that the community commented on Jane’s relationship with the Smiths, although Joseph and Emma continued to treat her like family. As the host, Lois Reitzes asks, "We learn that Joseph Smith had no prejudice against black people, in fact at one point in the film he says, 'To curse the negro is to tempt damnation.' Why don't we know that the founder of the Latter-day Saints didn't believe in excluding black people?" Deadwyler noted that there are many questions as to "why certain narratives are muted," but shared that Joseph Smith was opposed to slavery and planned to run for president on an abolitionist platform. But despite this example, racism continued to be an issue among the Latter-day Saints.

Deadwyler and many other actors who are not members of The Church of Jesus Christ of Latter-day Saints have shared on social media the way playing significant Saints in Church history has impacted their lives.

In a video, Deadwyler says, "Jane and Emma is the story of two women overcoming racial and personal strife to connect within their faith. . . . This is a film about two women coming into themselves and that is via the faith that they practice. . . . It is a synthesis of history and faith."

"The story of these two women is amazing," says Brad Schmidt, the actor who plays Joseph Smith in the film. Like Deadwyler, Schmidt is not a member of the Church but gained new insights into our history and the people who shaped it as a result of his role in the film. "I don't think you've seen any of this story told like this. . . .  It's a real human story that I think people are going to watch this and be affected by it and see the love that these people had for each other in a time that was very difficult. . . . What they were doing was groundbreaking."

Emily Goss, who plays Emma Smith, adds, "I think that if we in 2018 look at this friendship in 1844, this friendship that was real and powerful, despite the odds, I think we can draw inspiration from that. And if these two women were able to love each other as sisters in 1844 then we can get past all of the disagreements that we are having. . . . People take this movie as a beautiful example of not only what can exist in the Mormon Church but a beautiful example of what has existed in American history and bring that history into our present and future."

In addition to celebrating the way this film tackles the topic of race, Deadwyler also points out the powerful way Jane and Emma is promoting and celebrating women's voices. With a crew made up largely of women writers, directors, actors, producers, etc., Jane and Emma is a film created by women and about women. "We have to see more work by women, about women. More work about how they've stepped through the world, and seeing this film will give you that opportunity. It's giving you the opportunity to see how gutsy and bold and audacious and how much perseverance we have," Deadwyler says.