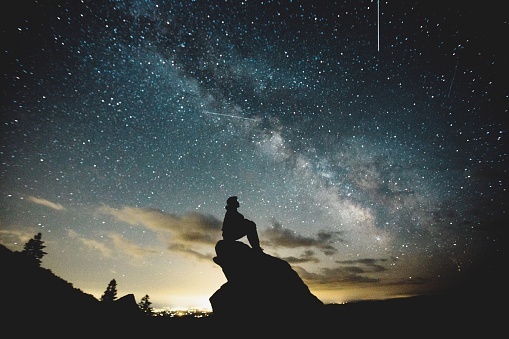 What Prophets Have Said About Extraterrestrial Beings

In 1830, the prophet Joseph Smith received a revelation illuminating how great and vast Heavenly Father's creations are throughout the universe. The revelation, which became Moses 1 in the Pearl of Great Price, describes a vision the Old Testament prophet Moses received. During this revelation, Joseph Smith witnessed what God had revealed to Moses in the vision.

"And worlds without number have I created; and I also created them for mine own purpose; and by the Son I created them, which is mine Only Begotten" (Moses 1:33).

"For behold, there are many worlds that have passed away by the word of my power. And there are many that now stand, and innumerable are they unto man; but all things are numbered unto me, for they are mine and I know them" (Moses 1:35).

"And as one earth shall pass away, and the heavens thereof even so shall another come; and there is no end to my works, neither to my words" (Moses 1:38).

There are many things that we can learn from this revelation, including that Heavenly Father has created "many worlds that have passed away" and "many that now stand, and innumerable are they unto man" and that there is no end to Heavenly Father's works.

But are these worlds "that now stand" inhabited by extraterrestrial life? If so, what does it look like and do some of these creations look like us?

A Race of Gods

We know that all of mankind is patterned after the same race as Heavenly Father (Genesis 1:26–27). And as Joseph Smith also revealed:

"God himself was once as we are now, and is an exalted man, and sits enthroned in yonder heavens. . . . If the veil were rent today, and the great God who holds this world in its orbit, and who upholds all worlds and all things by his power, was to make himself visible. . . you would see him like a man in form. . ." (Teachings of the Prophet Joseph Smith, compiled by Joseph Fielding Smith).

If God "was once as we are now" as Joseph Smith said, that would suggest that Heavenly Father was once like us and lived in another world like we do. This cycle of Gods living on other planets, progressing in mortality and eventually receiving eternal life has always been an eternal undertaking. As Brigham Young explained:

This "race of gods," as BYU professor Kent Nielsen describes in his 1971 article "People on Other Worlds," looks very much like we do. In fact, we are a part of this same species and have the ability to inherit celestial glory like our Heavenly Father.

"Obviously, God’s sons and daughters would be of his species, would resemble him," Nielson writes in his article. "Consequently, people on other worlds would be like us, because we are all his children."

According to BYU's Encyclopedia of Mormonism, it is possible that these extraterrestrial inhabitants could differ from our appearance in "unspecified ways," but nowhere in scripture does it mention how this might be.

Throughout history, heavenly messengers have traveled through time and space to relate the will of Heavenly Father to His children. Though not always described as "extraterrestrial," we know that these beings live in the presence of Heavenly Father somewhere beyond earth.

Dreams, visions, prayers, promptings—these are the ways we receive guidance from our Heavenly Father. On occasion, heavenly messengers have even been sent to earth to communicate God's will for His children or to guard them against harm.

These visitations are often mentioned in the scriptures, such as when Abraham was saved from being sacrificed on an altar in the land of Ur (Abraham 1:12–16), when angels saved Daniel in the lion's den (Daniel 6:19–22), when angels appeared to shepherds to announce the birth of Christ (Luke 2:8–10), when an angel spoke with Alma and the sons of Mosiah (Mosiah 27:11–17), when Moroni directed Joseph Smith where to find the gold plates (Joseph Smith History 1:59–60), and so on.

"In our temporal existence, we may not be able to travel to worlds beyond our solar system, but other beings in other phases of existence are not so limited," Nielsen explains. "The gospel has been taught in every dispensation by space travel. True, the visitors do not use rocket ships—they have more efficient means. When Moroni returned to heaven after one of his visits to Joseph Smith, Joseph 'saw, as it were, a conduit open right up into heaven, and he ascended till he entirely disappeared.'"

Though we know that these visitations and other forms of communications are not the extraterrestrial encounters some might envision, President Spencer W. Kimball affirmed they do happen in his book Faith Proceeds the Miracle.

Is there extraterrestrial conversation? Certainly. Man may speak to God, and receive answers from him.

Is there association of nonhuman beings? There is no question.

Are planets out in space inhabited by intelligent creatures? Without doubt.

Understanding the gospel, concern for people, love for the Savior: these form the underlying theme of Faith Precedes the Miracle.

President Kimball, the 12thPresident of the Church of Jesus Christ of Latter-day Saints, has spoken forthrightly to members of the Church, warning of the deceits of Satan and pointing out the road back for those who have erred and who yearn for reconciliation with the Lord.

Mormon Life Mormons ProphetsMormons,Prophets,Mormon Life
Comments and feedback can be sent to feedback@ldsliving.com