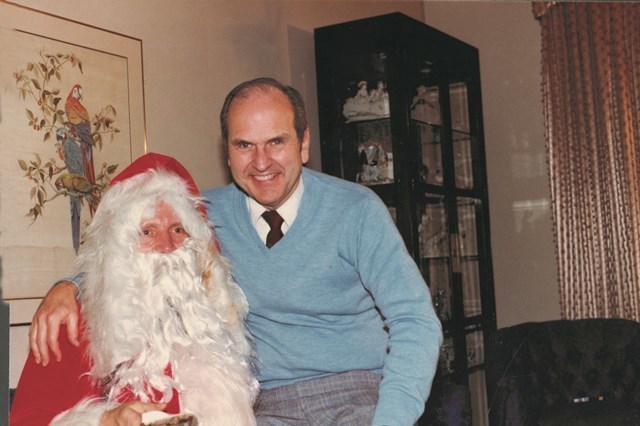 What Prophets Have Said About Santa Claus

Is Santa Claus a part of your Christmas tradition? Check out what a few Church leaders have said about old Saint Nick.

In homes throughout the modern world, stockings are still “hung by the chimney with care in hopes that St. Nicholas soon would be there” (“A Visit from St. Nicholas,” Clement Clarke Moore). But, oddly enough, one stocking seems to be missing. Perhaps it has never even been considered. I speak of a stocking for the Babe of Bethlehem. Of all people central to the Christmas scene, only His stocking seems to have been forgotten. It doesn’t seem quite right, inasmuch as it is His birthday that we are celebrating.

Just as there was no room for the Christ child at the inn at the time of His birth, with so many people, there is no place for Him in their hearts. The world He came to save has been so filled with trivia that little room has been left for the Lord and His righteousness. Many people have made room for sports and recreation, trinkets and toys, but the Prince of Peace—the Savior of mankind—is often forgotten.

At Christmastime we exchange gifts, but what have we done to show our appreciation to Him who created the entire earth with all of its beauty and abundance? How could we ignore Him who gave us life and all that sustains life? These priceless gifts come from Him. Wouldn’t it be nice if we could improve our ways—as a gift to Him at Christmastime? If His stocking has been empty in our minds, what could we now give?

It is a glorious thing to have old St. Nicholas in our hearts and in our homes today, whether he enters the latter through the open door or creeps down the chimney on Christmas Eve. To bring happiness to others without seeking personal honor or praise by publishing it is a most commendable virtue. . . .

Good old St. Nicholas has long since gone the way of all mortals, but the joy he experienced in doing kindly deeds is now shared by millions who are learning that true happiness comes only by making others happy—the practical application of the Savior’s doctrine of losing one’s life to gain it. In short, the Christmas spirit is the Christ spirit, that makes our hearts glow in brotherly love and friendship and prompts us to kind deeds of service.

Quoted in Stars Were Gleaming, a beautiful new book featuring the artwork of Greg Olsen.

No one can measure the effect of an unselfish act of kindness. By small, simple things great things do indeed come to pass. Of course, gifts given and gifts received make Christmas special. For many children, Christmas Eve is a very long night as they look forward with eager anticipation to the gifts Santa brings, which is why children love Santa Claus. Let me share what someone once said about Santa Claus:

"First of all, he's a joyous individual. People are attracted to joyous individuals as filings are attracted to a magnet. Next, Santa Claus is interested in making others happy. He increases the happy moments in the life of everyone he meets. He loves his work; he gets fun out of his job. He is childlike, simple, humble, sincere, and forgiving. Finally, he is a giver. His philosophy is to give himself away in service. He is a friend to everyone. He smiles. Perhaps you and I could attain greater happiness if we emulated Santa Claus a little more, for his way is the way of the Infant Jesus also."

From "The Man Who Would Be Santa," First Presidency Christmas Devotional, December 6, 1998

I want to emphasize that I have no quarrel with that well-fed gentleman with the red suit and the white whiskers. He was very generous to me when I was a boy, and we are looking forward with great anticipation to his visit at our home. All of those things with reference to Christmas are appropriate and good, and all of them are for children--except, I suppose, the mistletoe.

From "Keeping Christmas," a 1962 BYU Devotional.

Quoted in Stars Were Gleaming, a beautiful new book featuring the artwork of Greg Olsen.

How is Christmas regarded today? The legend of Santa Claus, the Christmas tree, the decorations of tinsel and mistletoe, and the giving of gifts all express to us the spirit of the day we celebrate; but the true spirit of Christmas lies much deeper than these. It is found in the life of the Savior, in the principles He taught, in His atoning sacrifice—which become our great heritage.

Emphasis added. From "The Real Christmas," a 1972 BYU Devotional.

The memory of that [first Christmas] night would bring Santa Claus and Frosty and Rudolph—and all would be welcome. But first and forever there was just a little family, without toys or trees or tinsel. With a baby—that’s how Christmas began.

Emphasis added. From "Without Ribbons and Bows," printed in the December 1994 Ensign.

As a boy, I loved going to the canyon to cut our Christmas tree, and I always tried to get one that reached to the ceiling. Though we received only a few gifts, our stockings were filled with fruit, nuts, and candy, and Santa always left something. Like all children, we suffered terrible anticipation at Christmastime--until, that is, we happened onto the Santa Claus costume in the bottom of an old trunk. Suddenly the secret was out. So that was why Father was always out doing chores when Santa came on Christmas morning.

From The Joys of Christmas, a booklet of President Benson's testimony on the true meaning of the season. Available as an eBook.

Our family has established a family tradition. Each Christmas Eve, we gather together around the tree. With the lights low and the fire burning in the fireplace, we ask the question once again, the most important question of the year, “Is it okay if we believe one more year?”—not only believe in the traditions of childhood with Santa Claus and reindeer, but more importantly in the message of the birth of our Lord and Savior, Jesus Christ, whose birthday we are celebrating.

From "Christmas Remembered," printed in the December 1988 New Era.