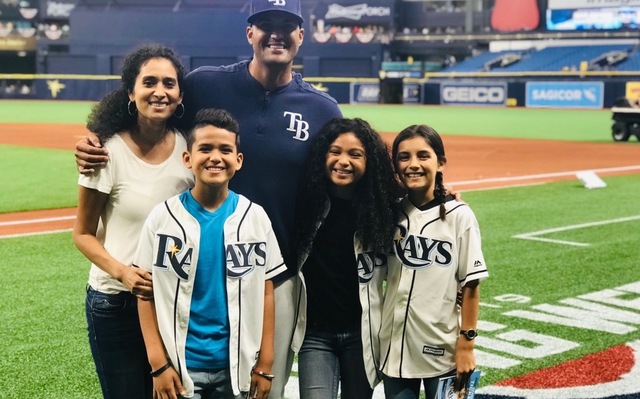 Brett Phillips had every reason to feel the weight of the world as he stepped up to the plate on Saturday night. Down by one, bottom of the ninth in Game 4 of the World Series with a chance to tie or win the game, he knew he was not the guy the Tampa Bay Rays wanted at bat. Phillips found his way onto the Rays’ roster for his defense and pinch running rather than his batting, and after going hitless in two previous at-bats during the team’s playoff rounds, it was without a doubt the most significant moment of the young player’s career. As the New York Times put it, “There was no logical reason for Phillips to succeed, yet he swore he was confident.”

Phillips’s bat connected with the ball and led to the tying and winning runs for the Rays to tie the series at 2-2. As I sat watching, I couldn’t help but think of my friend, Justin Su’a, who is the Mental Skills Coach for the Rays. I wondered if he had any part in Phillips’s confidence against all odds. And I thought about how Phillips’s approach to his big moment at bat applied to principles Su’a taught on our All In podcast interview.

“One of the things that I’ve learned from these elite performers in the world is it comes down to their habits,” Su’a told us on his episode of the podcast, explaining that the same principles surrounding athletic habits apply to spiritual habits as well. “What happens is, a lot of times, people beat up on themselves. And they think, ‘Oh, just because I can’t read for 15 minutes or an hour, oh OK, then I’m not going to do anything’. . . [but] little by little, a little becomes a lot and you might read one verse.”

“Sometimes it’s just doing something—an object in motion tends to stay in motion,” Su’a said, putting it another way. I believe it, not because Su’a told me, but because I’ve witnessed this truthfulness of this principle in my life and in the lives of those I love. There is power in consistently doing.

When I was in college, I met a girl named Angie. Angie was a convert to the Church. She had joined when she was 15 years old with her mom and her brother, but soon she was the only one in her family continuing to attend church. This meant that not only was no one waking Angie up for church each Sunday, she had to find rides to and from every church activity. I remember asking Angie one day how she did it. When so many kids our age were leaving the Church despite their parents’ best efforts, how was she able to stay strong in the gospel? She replied, “I just read my scriptures and said my prayers every day.” Is it really that simple? Could this be why we constantly hear about the importance of doing those things—because they really are that important?

Su’a says the key is to recognize that while our goal in doing these things is eternal salvation, “the magic happens” when the joy and the Spirit you feel as a result of sticking to these “heavenly habits” becomes the prize itself.

“You’ll end up finding that you can be happy in the moment. You’re going to find joy in keeping the commandments and doing what the Lord asks,” he explains. “And that’s when the magic happens and when the Spirit is filling your life. It becomes palpable and tangible and you wake up excited to do it the next day.”

I like to think it was this ability to be in the moment—to soak it all in—rather than being focused on the end goal that allowed Brett Phillips to deliver the biggest play of his career.

“Everyone in that situation wants to be up there and be the man,” he said after the game. “And that’s exactly what was going through my head.”

It is my belief that developing these “heavenly habits” in a healthy way will allow us to live joyfully in the present and that we will perform better in the biggest moments of our lives. These moments may not take place under stadium lights or in front of millions of people, but they may carry even greater consequences.