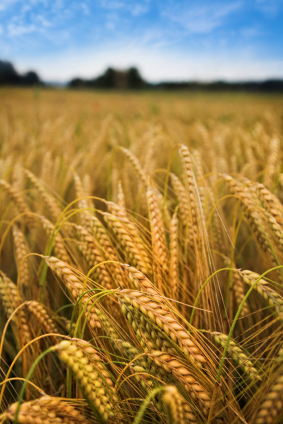 Did you know that cereal grains are grown in greater quantities and provide more food energy worldwide than any other type of crop? They are one of the foundation foods that humans consume. In the United States, wheat is one of the most common grains that people begin to store. Some good questions to ask: Why is wheat so great to store? What kind of wheat should I store? How should wheat be stored? And, how can I use wheat?

Why is wheat so great to store?

History has shown wheat’s role in human survival. From Biblical stories to American Pioneer experiences, we know it works as a way to sustain life in a crisis. Wheat is packed with vitamins and minerals. Wheat kernels have three main divisions: the bran, the endosperm, and the inner embryo or wheat germ. The bran layer constitutes 14 percent of the wheat kernel and is removed when producing white flour. The bran is packed with vitamins A, C, and E, calcium, iron, and iodine. The bran also happens to be the best source of dietary fiber, which aids in digestion and helps ward off disease. The wheat germ layer is an excellent source of vitamin E, as well as other vitamins and protein. Unfortunately, processing used to produce and refine white flour removes much of the valuable nutrients. Many important nutrients are removed when layers are separated during processing. For this reason, it makes sense to put whole wheat back into your diet.

Pound for pound, wheat is one of the least expensive foods available. Becuase grain products will expand in your stomach (satisfying you even if you eat less), using wheat products can help you stretch your budget by eliminating the need for store-bought, overpriced, and over-processed goods.

If you are concerned that your food storage may be lacking in protein, a good supply of wheat and beans will form a complete protein. Just a half cup of uncooked wheat contains eight to 10 grams of protein. So, not only will wheat give you the protein needed for muscle growth and repair, but you will have a low-fat complex carbohydrate to give your body the energy it needs to make it through the day.

What kind of wheat should I store?

The most common types of wheat grown in the United States are red and white. Varieties include hard red spring, hard red winter, hard white winter, soft white spring, and soft white winter. Deciding which wheat to store depends on what you will do with it.

Hard wheat is produced in areas that have dry temperature climates. The kernels are hard in texture, small, red, and have strong gluten. Gluten is what gives wheat cohesive strength and allows it to stretch, expand, and retain gases as fermenting dough expands. Hard red winter is excellent for making hearty, whole wheat loaves of bread, or to use in recipes as an extender for red meat. Hard white winter wheat contains a more delicate flavor than the hard red wheat and can be used to make light and fluffy bread, rolls, and scones. It can also be used in recipes as an extender for white meat. Both of these varieties of hard wheat are high in protein and fiber.

The soft white classes of wheat are produced in areas of mild winters with adequate moisture. White kernels are larger and plumper than red wheat kernels, are of a softer texture, and have weaker gluten strength. This wheat is used to make flaky pastries, pie crust, cakes, crackers, and breakfast cereals. Because of its lower gluten and protein content, it is not recommended for use in breads.

Spelt is a species of wheat; it's a grain with a deep, nutlike flavor that is very similar to hard red wheat. It is planted in the fall and harvested in the summer. The seed resembles hard red wheat, although it is a bit longer and more pointed. Spelt, just like wheat, is a good source of protein, iron, potassium, and B vitamins.

How should wheat be stored?

Whole wheat kernels will store longer and better than when ground up into flour. When storing your wheat at home, make sure it is in containers specifically identified on the label as food storage containers.

It is best to purchase wheat with a moisture content level less than 10 percent. Heat, moisture, oxygen, and light are the enemies to preserving food for an extended period. Two of the best ways to properly store wheat are in a #10 can with an oxygen absorber, or sealed within a metallized plastic bag with an oxygen absorber, then placed in a bucket.

Always store your wheat in a cool, dry place to ensure the longest shelf life. The cooler and least fluctuating temperature (between 40-75° F), the better.

How can I use wheat?

Wheat adds variety to your food storage. Most people think only of using wheat as flour in bread products. But wheat can be used for much more. Wheat can be cracked, sprouted, ground into flour, and even grown as wheatgrass.

Try the flour in noodles, pie crust, pastries, muffins, cookies, or anytime a recipe calls for flour. Cracked wheat by itself makes a great hot cereal. Try it as a meat extender for hamburgers, meatloaf, lasagna, pizza, spaghetti sauce, sloppy joes, chili, or soups. Simply crack the wheat in a hand grain mill or a blender. Cook your hamburger, drain the fat, then add 2 cups of water and a half cup cracked wheat. Stir and simmer for 20 minutes, then add to your favorite recipes.

Sprouted wheat can be added to top off sandwiches and salads. Flour can also be used as a thickener in soups.

Cooking with spelt is very similar to wheat. You can crack, grind or cook the spelt berry. You can make bread, waffles, pancakes, hot cereal, cake, muffins, cookies, crackers, pasta, and more. There are some variations in the recipes because spelt doesn't require as much water and doesn't need to rise as high as wheat.

Anyone who invests in wheat as part of their food storage program should also invest in a wheat grinder. If possible, obtain both the quick electric mill and the less expensive hand mill which can be used with just hand power. Now all you need to do is select a recipe, grind your wheat to the desired texture, and you're ready to go.

If you still aren’t convinced of the importance of storing and using wheat, check out our recipe section. As you begin to use wheat regularly you may be surprised by its versatility, and you will soon see that wheat really is the staff of life.