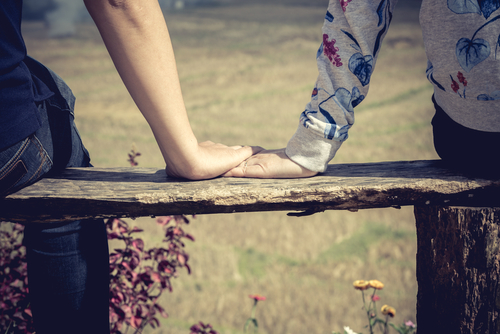 When Your Spouse Leaves the Church: How to Strengthen Your Marriage Without Weakening Your Faith

I remember the first time I told someone out loud that my husband was inactive. I was sitting in the first meeting of a six-week marriage course taught during Sunday School in my ward. It had been six months or more since he’d last attended Church with me. His was a slow exit. He’d miss a week or two, claiming he felt ill, and when he did go, it was only ever for sacrament meeting. After a while, he just stopped going altogether, despite my gentle invitations to return.

I tried to ask him about it, but he would give a vague excuse and then redirect the conversation. His temple recommend lapsed. His last time in a church building was when I sang in choir. He came to watch and support me but then never came again.

It wasn’t until over a year after his last visit to church that he finally told me he didn’t want to “be Mormon” anymore. It caught me completely off guard: not only was my husband inactive but he was leaving the Church entirely.

The funny thing is, I don’t remember exactly when he told me that. I remember so many details about so many other related events, but that one—what seems like the biggest one—escapes me. All I remember was feeling . . . relieved. It felt like the first time in over two years that he’d been honest with me.

But apart from that, I had no idea what to do. My husband was leaving the Church. But he didn’t want to leave me.

So there we were. We had no idea where to start figuring out our situation. We didn’t even know at first whether or not we were going to stay together. But we both knew it was a decision that needed to be made carefully and not quickly.

Despite how betrayed I felt and how important my faith is to me, I wanted to make it work if I could; I wanted to stay. Every couple has things to work through. I figured this was one of ours.

However, in many ways, it felt like I didn’t know this man I’d been married to for seven years. It felt like I almost needed to date him all over again so I could figure out who he was and where we were going if indeed we were going somewhere together.

I wish I could say it was easy. Or that I found some magic bullet by study and by faith that suddenly made everything okay. What I can say is that in my quest for insight and inspired answers, I’ve found many helpful stories and lots of advice that I believe can offer hope to others the way it has for me.

Much of the pain in mixed-faith marriages—indeed, in most troubled marriages—comes from unspoken and unfulfilled expectations. Psychology Today writer Dr. Rob Pascale put it this way:

“Exceedingly high expectations can be hard to satisfy, and if we don’t adjust what we expect from our marriage to reflect reality, we run the risk of being continually disappointed. Disappointment in turn can lead to demotivation about building the relationship further, but also to concerns as to whether marrying that person was the right decision.”

When it comes to happy marriages, he says, “Unrealistic marriages are the root of marital dissatisfaction.”

You have got to get on the same page, to rebuild love and trust. But how? When I got married, I expected to attend the temple with my husband often, maybe to serve a senior mission, or at least to live a life of Church service together. And my spouse changed the rules. That hurt, immensely. It caused unavoidable damage to the trust bank our relationship had built over months and years. It forced us to start over.

While a change in religious views is huge, it is still fundamental to make sure you feel safe talking to one another. Both of you are hurting—the believing spouse from “being abandoned” and the other from whatever event caused them to leave their faith behind. It’s likely you both are feeling very strong emotions and that you suddenly find you disagree on major issues you both care about deeply. If you aren’t careful, discussions can escalate quickly, leaving you both defensive, angry, and feeling misunderstood and alone.

“Some individuals may brush their feelings aside in the hopes of avoiding ‘stirring the pot,’ while others may become so overwhelmed with frustration, anger, or sadness that they lose control and have an emotional outburst. The truth is that neither of these approaches are effective in addressing or solving concerns in relationships” (“How to Be Heard Without Being Harsh”).

“When approaching a conversation that has the potential for conflict or criticism, use the softened startup technique. This is much what it sounds like—start a difficult conversation gradually, without blame or interrogation, and softly begin to approach the topic. This does not mean that you’re ‘beating around the bush;’ it just means that you’re being wise in how you address a concern in a way that doesn’t put the other person on the defensive.”

If despite your best effort, your partner still ends up feeling threatened and the conversation starts escalating, it’s often best to agree to take a break and come back after your fight-or-flight response has had a chance to cool off. Getting angry can be just as destructive to the trust between spouses as shutting down is.

Establishing or re-establishing intimacy relies on your ability to communicate.