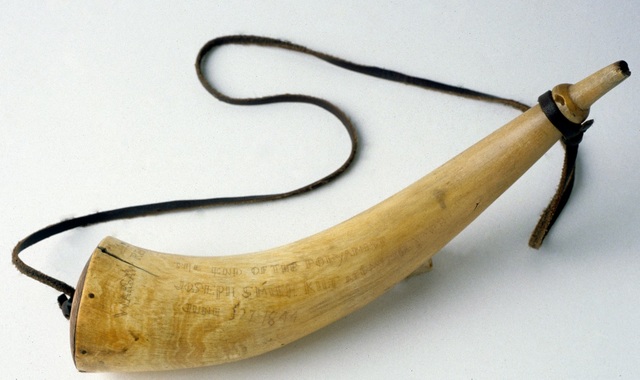 When we speak of the mob that killed Joseph and Hyrum Smith in Carthage Jail, we sometimes forget that each of these men had names and lives. One of these men, from the militia in the neighboring town of Warsaw, Illinois, commemorated his participation in the killings on this horn, which carried his gunpowder: “Warsaw Regulators, The end of the Polygamist Joseph Smith kilt at Carthage Jail June 27, 1844.”

While we do not know the name of the man who owned this powder horn, we do know the names of several men who helped organize and carry out the plan to kill the Prophet Joseph. As two commentators have stated, “The murder of Joseph and Hyrum Smith at Carthage, Illinois, was not a spontaneous, impulsive act by a few personal enemies of the Mormon leaders, but a deliberate political assassination, committed or condoned by some of the leading citizens in Hancock County [Illinois].”

Learn more about the life of the Prophet Joseph through the Joseph Smith Papers project, an incredible project that gives readers access to details, records, and manuscripts surrounding Joseph Smith's life that have never been published before. You can check out volume one, volume two, and volume three of this series at deseretbook.com.