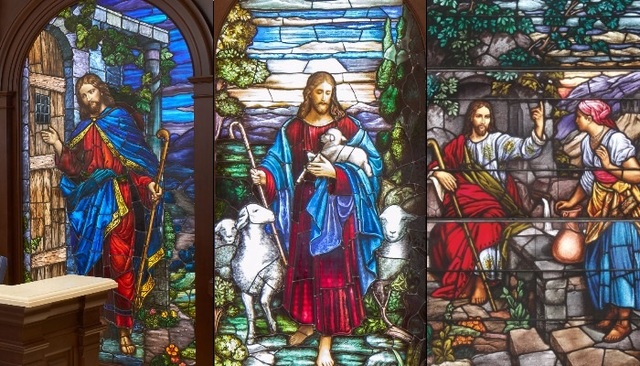 If you've visited the Provo City Center Temple, you may have seen the stunning stained glass depiction of the Savior holding a lamb as you enter the main, street-level entrance. Illuminated from behind with light, the large stained glass panel is one of the most stunning pieces of art in the temple. 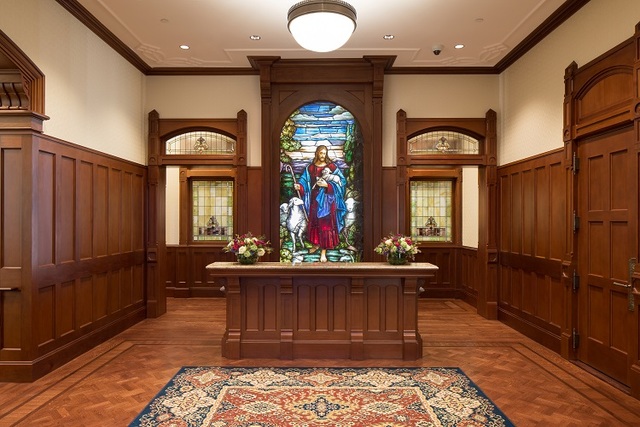 What you may not know is the history behind this hundred-year-old stained glass window pane. You also may not know that it has sister panes in the Star Valley Wyoming Temple lobby and the Cedar City Utah Temple.

The stained glass depictions of Christ were rescued, just like the Provo City Center Temple. After a tragic fire destroyed the beloved Provo Tabernacle, the Church rescued the remnants of the historic building and built a beautiful temple from its ashes.

► You'll also like: Little-Known Stories and What You Should Look for Inside the Provo City Center Temple

Similarly, when the First Presbyterian Church of Astoria in New York had to sell their historic 1920s property, an art dealer rescued a set stained glass windows from demolition, each portraying Christ in a different Bible scene. Funded by the Presbyterian congregation in the early 1900s, the set of beautiful stained glass depictions of Christ were commissioned by local members for their new church building.

However, in 2008, the First Presbyterian Church of Astoria in New York no longer housed congregations of around 1,200 like it did in the 1950s. The significantly smaller congregation chose to sell their historic church building, which, according to Deseret News, was demolished and replaced with a nonprofit senior living center.

After an art dealer preserved the windows, he sold them to an LDS art collector, who then donated at least four of the stained glass panes to The Church of Jesus Christ of Latter-day Saints.

Ashlee Whitaker, the curator of religious art for BYU's Museum of Art, told Deseret News, "A lot of these windows and art in churches played an important role in reminding people about the stories they learned in scripture from the priests that would teach them."

"The aspect of light coming through adds an additional symbolic component that Christ is the light, His teachings are the truth, and He Himself is the way, the truth, and the life," Whitaker continued. "So it's just a beautiful, symbolic tradition in these stained glass windows." 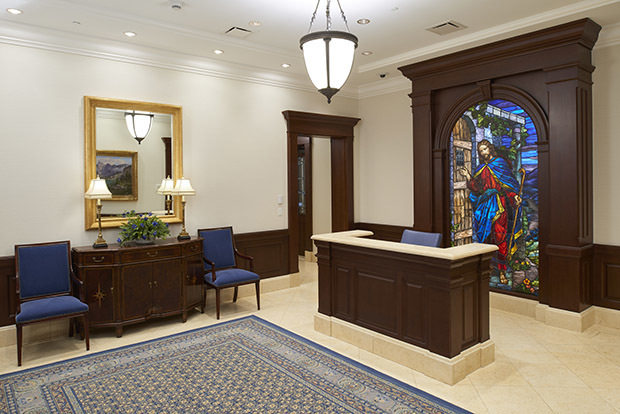 Dedicated on Sunday, October 30, 2016, the Star Valley Wyoming Temple features the second stained glass behind the reception desk in the front entrance. Lit from behind with around 1,000 LED lights, President Mark Taylor of the Afton Wyoming Stake told Deseret News, "As soon as you turn those lights on, it's breathtaking."

The third and fourth rescued pieces have been placed in the Cedar City Utah Temple. "They set a tone of reverence as you enter, and as you go through the temple you'll be able to feel the Savior here," Mark Berry, project manager of the temple, told Mormon Newsroom.

The Cedar City Utah Temple, which is open to the public from October 27 through November 18, will be dedicated on Sunday, December 10, 2017.

Rescued from demolition, each stained glass window pane serves a purpose in bringing beauty, history, and religious art to LDS temples. Restored and beautifully displayed, the stained glass images not only add a unique touch to each temple, but they also inspire a respect for other religions' art and history.

Whitaker and BYU's Museum of Art attempted to track down the original artist and managed to contact a former member of the congregation, Robert Singleton. In an email to the BYU Museum of Art shared by Deseret News, he said the following:

"I cannot find words to adequately express my appreciation on both your interest in, and reclamation of First Presbyterian of Astoria’s windows. A poet once wrote, 'the rarer the victory, the sweeter its savor.' History ebbs and flows. You point to a future when all things will be reclaimed and set in good foundations."

Lead image compiled of images from Mormon Newsroom and BYU's Museum of Art.