Why Elder Packer Invited a Hostile, Less-Active Member to Speak at Stake Conference

The following is an excerpt from  Memorable Stories and Parables by Boyd K. Packer.

The Deseret News of 10 July 1956 printed a bulletin from the LDS Hospital on the condition of an 18-year-old girl who had been brought to the hospital six days earlier having survived nine days pinned under a car in Parley's Canyon, near Salt Lake City. The bulletin was, for a change, optimistic: "Attending physicians at the LDS Hospital said the girl's blood condition is so improved she likely will need no more transfusions. Doctors said her diet has been increased to include potatoes, eggs, and puddings. She no longer requires intravenous feedings."

The injuries she had sustained in the accident were not of themselves the important factor. It was the lack of food and moisture that reduced her body to that poor condition. It was several days before the doctors gave much hope for her recovery.

It isn't easy to minister to one so starved. It was not a matter of just putting food before her. The food had to be carefully administered, for delicate balances could be upset, and her life was at stake. Doctors were extremely careful, for their very treatment might prove fatal. When she recovered, that was regarded as something of a miracle.

So it is with those around us who are spiritually undernourished, or starved. We refer to them as the lost sheep. We are called to minister to them. They are of all descriptions. Some have deficiencies of one kind or another that merely rob them of spiritual vigor. Others have so seriously starved themselves of spiritual things that we scarce can hope to save them.

Responsibility for redemption of the lost sheep rests with the priesthood. The doing of it rests upon the home teacher.

What can improve our ability, as individuals or as organizations, to redeem the lost sheep? What "vitamin" sparks an appetite for spiritual things?

In the April 1964 issue of the Improvement Era there appeared an article by Wilford B. Lee entitled "John Is Inactive . . . Why?" The author pointed out that knowledge does not necessarily control activity. Thus many know what they ought to do but fail to do it, even after encouragement from home teachers.

As regards righteous behavior, then, to know intellectually is not enough. The feelings must be engaged. Alma recognized what would redeem the lost sheep. He knew what the moving power was. He saw "no way that he might reclaim them save it were in bearing down in pure testimony against them." (Alma 4:19.)

Testimony, then, is the moving power. Testimony is the redeeming force.

If you who hold positions in the Church would redeem the lost sheep, see that the "vitamins" go to those with deficiencies and not merely to those who are nourished by regular, balanced diets.

At a ward sacrament meeting I attended recently a sister had been invited to sing whose husband was not active in the Church. He was, however, at the meeting. The bishop wanted a very special program for this occasion. His first announcement was: "Brother X, my first counselor, will give the opening prayer." His second counselor gave the closing prayer.

How unfortunate, I thought. The three men in the bishopric struggle with such concern over the spiritually sick, then take the very medicine that would make those people well--activity, participation--and consume it themselves in front of the needy! . . .

Several years ago I visited a stake presided over by a man of unusual efficiency and ability. Every detail of the stake conference had been scheduled. He had done the usual thing in assigning prayers from the selected circle of the stake presidency, the high council, the bishops, and the stake patriarch. Those brethren had not been notified, so we changed the assignment from those who deserved the honor to those who needed--desperately needed--the experience.

The president had a detailed agenda for the general sessions, and he mentioned that there were twenty minutes in one session that were not scheduled. I told him that we could call on some to respond who otherwise would not have the opportunity and needed the strengthening experience. He countered with the suggestion that he alert several able, prominent leaders to prepare for possible speaking assignments. "There will be many nonmembers present," he said. "We are used to having an organized and very polished conference performance. We have very able people in the stake. They will leave an excellent impression."

Twice again during our meeting he mentioned the schedule and pressed to have the stake's "best performers" called. "Why don't we save this time for those who need it most?" I said. His reaction was a disappointed, "Well, you are the General Authority."

Early Sunday morning he reminded me that there was still time to alert someone and thus leave the best impression.

The morning session was opened by the president with a polished and stirring address. Next we called on his second counselor. He was obviously flustered, and he began, "You can't believe a thing Brother Packer says." (We had previously indicated that both counselors would probably speak in the afternoon session.) We were to go to his home for the noon meal. He had known there would be time to go over his notes, so he had left them at home.

For want of his notes he turned to testimony, giving an inspiring account of an administration he had performed during the week. A brother, given up by his doctors, had been called from the very shadows of death by the power of the priesthood. I do not know what was on his notes, but surely it could not have compared in inspiration to the testimony he bore.

An elderly woman sat on the front row holding hands with a weathered-looking man. She looked a bit out of place in the fashionably dressed congregation--rather homespun by comparison. She looked as if she ought to talk in conference, and given the privilege she reported her mission. Fifty-two years before she had returned from the mission field, and since then she had never been invited to speak in church. It was a touching and moving witness that she bore.

Others were called upon to speak, and near the close of the meeting the president suggested that I take the remainder of the time. "Have you had any inspiration?" I asked. He said that he kept thinking of the mayor. (The voters in that large city had elected a member of the Church to be mayor, and he was in attendance.) When I told him we could have a greeting from the mayor, he whispered that the man was not active in the Church. When I suggested that he call upon him anyway he resisted, saying flatly that he was not worthy to speak in that meeting. At my insistence, however, he called the man to the stand.

The mayor's father had been a pioneer of the Church in that region. He had served as bishop of one of the wards and had been succeeded by one of his sons--a twin to the mayor, as I recall. The mayor was the lost sheep. He came to the pulpit and spoke, to my surprise, with bitterness and with hostility. His talk began something like this: "I don't know why you called on me. I don't know why I am in church today. I don't belong in church. I have never fit in. I don't agree with the way the Church does things."

I confess that I began to worry, but he then paused and lowered his eyes to the pulpit. From then until his talk was over he did not look up. After hesitating, he continued: "I guess I just as well tell you. I quit smoking six weeks ago." Then, shaking his fist in a gesture over his head towards the congregation, he said, "If any of you think that's easy, you have never suffered the hell I have suffered in the last few weeks."

Then he just melted. "I know the gospel is true," he said. "I've always known it was true. I learned that from my mother as a boy.

"I know the Church isn't out of order," he confessed. "It's me that's out of order, and I've always known that, too."

Then he spoke, perhaps, for all of the lost sheep when he pleaded: "I know it's me that is wrong, and I want to come back. I have been trying to come back, but you won't let me!"

Of course we would let him come back, but somehow we hadn't let him know that. After the meeting the congregation flooded up--not to us but to him, to say, "Welcome home!"

On the way to the airport after conference the stake president said to me, "I've learned a lesson today."

Hoping to confirm it, I said, "If we had done what you wanted to do you would have called on this man's father, wouldn't you, or perhaps his brother, the bishop?"

He nodded in affirmation and said: "Either of them, given five minutes, would have presented a stirring fifteen or twenty-minute sermon to the approval of all in attendance. But no lost sheep would have been reclaimed."

All of us who lead in the wards and stakes must open the door to the lost sheep; stand aside to let them through. We must learn not to block the entrance. It is a narrow way.

I do not appeal for the lowering of standards. Just the opposite. More lost sheep will respond quicker to high standards than they will to low ones. There is therapeutic value in spiritual discipline.

Spiritual discipline framed in love and confirmed with testimony will help redeem souls. 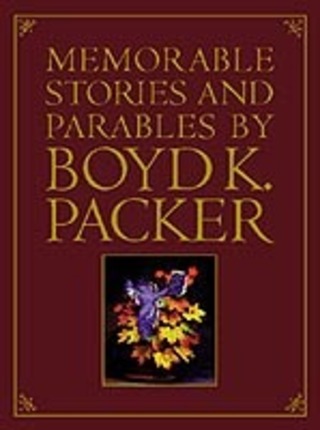 This volume brings together 26 more of the most memorable stories and parables of Pres. Boyd K. Packer. Read and enjoy treasures such as The Mediator, Spiritual Crocodiles, Channeling Your Thoughts, Balm of Gilead, Of Cars and Dates, and more. Pres. Packer follows the Lord's injunction to "Teach ye diligently" and does so in a manner that is clear and lasting. These short stories are great for daily inspiration and will be life lessons that are hard to forget.