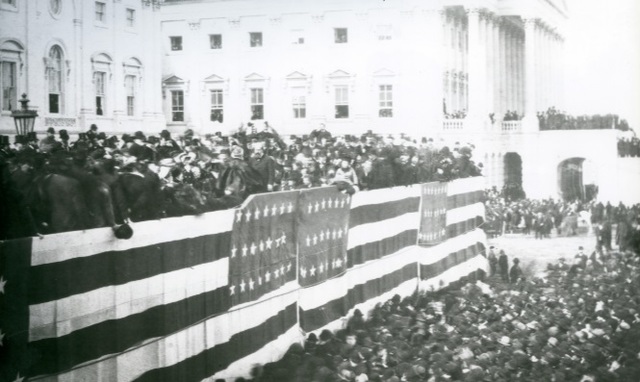 Why Mormons Were Mentioned in a Presidential Inaugural Address

When James A. Garfield took the oath of office as the new president of the United States of America in 1881, Mormonism was a heavily contested topic in much of the nation. As one of the largest territories in the nation at the time, Utah kept pushing for acceptance as a state, but many Americans feared the "peculiar" Mormons and their practices—including polygamy.

But this view was not unique to America. In 1910, twenty years after the Church ended the practice of polygamy, LDS missionaries were expelled from Germany for the fear they were trying to convert or kidnap women to provide more wives for Mormon men back in Utah. In fact, during the early 1900s, Sir Winston Churchill, then Secretary of the Home Department, was appointed by British Parliament to head up an investigation of LDS missionaries.

Tensions regarding polygamy rose in the United States when the Supreme Court ruled anti-polygamy laws passed decades earlier were constitutional. According to the Church's Gospel Topics Essay on polygamy, "federal officials began prosecuting polygamous husbands and wives during the 1880s. Believing these laws to be unjust, Latter-day Saints engaged in civil disobedience by continuing to practice plural marriage and by attempting to avoid arrest by moving to the homes of friends or family or by hiding under assumed names."

It was during this time of contention and suspicion of the Church and its leaders that James A. Garfield gave his inaugural address on March 4, 1881. In it, he stated:

The Constitution guarantees absolute religious freedom. . . . The Territories of the United States are subject to the direct legislative authority of Congress, and hence the General Government is responsible for any violation of the Constitution in any of them. It is therefore a reproach to the Government that in the most populous of the Territories the constitutional guaranty is not enjoyed by the people and the authority of Congress is set at naught. The Mormon Church not only offends the moral sense of manhood by sanctioning polygamy, but prevents the administration of justice through ordinary instrumentalities of law.

In my judgment it is the duty of Congress, while respecting to the uttermost the conscientious convictions and religious scruples of every citizen, to prohibit within its jurisdiction all criminal practices, especially of that class which destroy the family relations and endanger social order. Nor can any ecclesiastical organization be safely permitted to usurp in the smallest degree the functions and powers of the National Government.

While President Garfield's concerns might be understood given the context, it's interesting that he attacked the Mormon church in defense of the family. Throughout its history, the LDS Church has always defended the family and focused on building strong, eternal families. In fact, the doctrine of the family is one of our most fundamental and beloved doctrines.

While we might not understand the full reasons polygamy was reinstituted in the Church under Joseph Smith, the Church's Gospel Topics Essay explains this:

The Book of Mormon identifies one reason for God to command it: to increase the number of children born in the gospel covenant in order to “raise up seed unto [the Lord].”

Plural marriage did result in the birth of large numbers of children within faithful Latter-day Saint homes. It also shaped 19th-century Mormon society in many ways: marriage became available to virtually all who desired it; per-capita inequality of wealth was diminished as economically disadvantaged women married into more financially stable households; and ethnic intermarriages were increased, which helped to unite a diverse immigrant population. Plural marriage also helped create and strengthen a sense of cohesion and group identification among Latter-day Saints. Church members came to see themselves as a “peculiar people,” covenant-bound to carry out the commands of God despite outside opposition.

It turns out when James A. Garfield was speaking of the need for religious freedom, of strong families, and of unity in diversity, he had more in common with the Mormons than he might have thought.

Lead image from Boston Globe of James A. Garfield's inauguration