The following is excerpted from President Thomas S. Monson's biography, To the Rescue, and illustrates a few moments from his military service in WWII.

Before Tom left for basic training, his bishop recommended that he receive the Melchizedek Priesthood. Tom phoned his stake president, Paul C. Child, to set up an interview. President Child was known for his love and deep understanding of the scriptures. He was also known for his searching, detailed probing of the scriptures with those he interviewed. So when Tom called for an appointment, he was reasonably nervous.

“Hello, President Child. This is Tom Monson,” he said. “I have been asked by the bishop to visit with you relative to being ordained an elder.”

“Fine, Brother Monson. When can you see me?” President Child replied.

Knowing that President Child’s sacrament meeting was at six o’clock, Tom suggested five o’clock, hoping that the interview would be brief.

“Oh, Brother Monson, that would not provide us sufficient time to peruse the scriptures,” said President Child. “Could you please come at two o’clock and bring with you your personally marked and referenced set of scriptures.”

When Sunday arrived, Tom appeared at President Child’s home on Indiana Avenue at the appointed hour. He was “greeted warmly, and then the interview began.”

“Brother Monson, you hold the Aaronic Priesthood. Have you ever had angels minister to you?”

“Do you know,” said the president, “that you are entitled to such?”

Then President Child requested, “Brother Monson, repeat from memory Doctrine and Covenants section 13, which tells of the ordination of Joseph Smith and Oliver Cowdery to the Aaronic Priesthood.”

Tom began, “Upon you my fellow servants, in the name of Messiah, I confer the Priesthood of Aaron, which holds the keys of the ministering of angels . . .”

“Stop,” President Child directed. Then in a calm, kindly tone he counseled, “Brother Monson, never forget that as a holder of the Aaronic Priesthood you are entitled to the ministering of angels.” He then asked Tom to recite section 4 of the Doctrine and Covenants: “Now behold, a marvelous work is about to come forth among the children of men. Therefore, O ye that embark in the service of God, see that ye serve him with all your heart, might, mind and strength, that ye may stand blameless before God at the last day . . .”

Tom never forgot the spirit he felt in President Child’s home. It was “almost as if an angel were in the room.” And the message of the fourth section he had recited would become more than words revealed in 1830—those words would become a standard for him in his service to the Lord. . . .

Tom’s orders for active military duty were slow in coming. Week after week he would bid a fond farewell to Frances and to his family, only to find that his orders were not in the Friday mail. Finally, on October 6, 1945, he shipped out for San Diego. His family and friends came to see him off at the train depot not far from his house. John Burt from the bishopric came as well. Just before the train pulled out, John placed a copy of the Missionary Handbook in Tom’s hand. Tom looked quizzically at him and said, “I’m not going on a mission.” John answered, “Take it anyway; it may come in handy.”

Tom adapted easily to the regimen of military life. He was not one to rebel at authority; he liked structure and had learned from his youthful pranks that the best policy was to stay out of trouble. For the first few weeks, he felt as though the navy were trying to kill him rather than train him on how to stay alive.

Tom wasn’t a Protestant, a Jew, or a Catholic. He was a Mormon, so he stayed in place, along with a handful of other men. He has said, “One of the sweetest expressions I have heard came from a petty officer when he said, ‘What do you fellows call yourselves?’ It was the first time I realized I wasn’t standing alone.”

The petty officer scratched his head and then directed them, “Go find somewhere to meet, and don’t bother me until this afternoon.” They marched away almost to the cadence of the Primary rhyme: “Dare to be a Mormon; dare to stand alone. Dare to have a purpose firm, and dare to make it known.”

Standing as an Example

That Tom Monson was a member of The Church of Jesus Christ of Latter-day Saints became well known. One of his fellow sailors, Eddie Foreman, who worked in the same office, later wrote in a letter to him: “The eyes of so many of us were watching you as the Devil did his best to lead you astray.

“We were out at La Jolla Shores having an Office-Beach party. Beer was being served. . . . You were kind of a natural leader even then among us. They would not leave you alone. . . . I can see you so clearly right now in my mind—that skinny, tall kid with your smile and sense of humor to laugh your way through saying no, so no one would take offense, pushing it away, repeating, no, no. How would it have hurt you? It would have hurt us, Tom—those of us who were watching you. The Lord could still have made you an apostle if you had taken that beer, but what would it have done to us who remember that moment in time so many years ago? How grateful I am to you, President Monson, for that example, for the stalwart you were as a young man in the military service and for what it means to me as I raise my hand in the square to sustain you without any reservation whatsoever.”

When the two reunited many years later, Eddie said to Tom, “You seemed calm under stress and perfectly in control, with complete trust in your religious beliefs.” Eddie had wanted that for himself, so he had studied the gospel and had become a member of the Church. Tom had known neither of his friend’s conversion nor of the role he himself had played in it. . . .

The night before their Christmas leave, the barracks room was quiet except for the moans of Tom’s buddy Leland Merrill, a fellow Mormon, in the adjoining bunk.

Tom suggested he get to the base dispensary, but he and Merrill both knew that would mean they wouldn’t let him go home for Christmas. The moans got louder and more frequent. In desperation, Merrill whispered, “Monson, aren’t you an elder?” Tom acknowledged that he was. Merrill then said, “Give me a blessing.”

Tom had never given a blessing; he had never seen anyone give a blessing to the sick. He prayed for help, and an answer came, “Look in the bottom of your sea bag.” There, at two o’clock in the morning in a barracks of 120 sailors, many of them aware something was going on, Tom “emptied on deck the contents of the bag.” He then took to the barracks’ night-light that hard, rectangular object he had stashed at the bottom, the Missionary Handbook, and read how to bless the sick. “With about 120 curious sailors looking on,” Tom blessed Merrill that he would get well. Before he could stow his gear, “Leland Merrill was sleeping like a child.” The next morning as they prepared to ship out for home, Merrill, with a broad smile on his face, said, “Monson, I’m glad you hold the priesthood.” 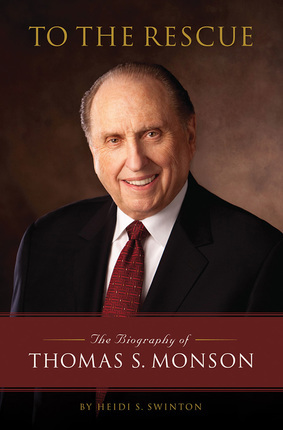 President Monson cares about people by the millions; he has traveled the earth to bless countless lives in unnumbered lands. He may be known best, though, for caring about people one by one. He takes time for those who may have been mostly forgotten by others. He recognizes the person in the crowd who might need the extra bit of attention he can provide. He goes where the Spirit leads him — even if it means traversing continents to offer a priesthood blessing to a suffering friend.

To the Rescue chronicles the life and ministry of this extraordinary leader. It is filled with the heartwarming personal accounts so typical of President Monson — some that have become favorites over time and many others that have not been told before.