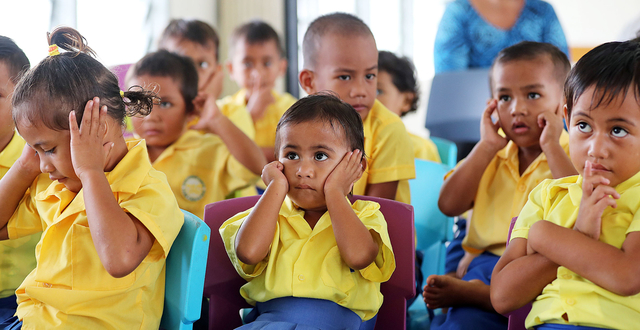 Latter-day Saints across Samoa are preparing for President Russell M. Nelson's visit to their nation during his Pacific ministry tour. With 82,000 Latter-day Saints (approximately 40 percent of the population) in Samoa, there's no doubt The Church of Jesus Christ of Latter-day Saints has made an impact on this island nation.

One way this influence is felt is through the free preschools the Church has established throughout Samoa, where preschool is imperative. "Everybody asks, 'Where's the money? Where's the resources?'" Bruce McCarthy, the Church's Self-Reliance Services and Perpetual Education Fund manager for Samoa, told the Deseret News. "We don't pay teachers. We don't hold fundraisers. We don't have a budget. We don't have committees. We're working on faith. Our help and inspiration comes from the Lord. Some people find that concept hard to understand." These volunteer-run schools have helped families across Samoa access education for their children.

"They are fast to take the government funding we offer for similar programs but they have failed to provide the same benefits," he wrote of the church preschool's opponents. "Parents have noticed the huge difference and have in turn moved their children away and into your schools instead."

He continued: "I want you to carry on with the good work, don’t give up easily, and I hope you never get discouraged. . . . Furthermore, do not succumb to any bad or negative influences that may attempt to deter you from your objective."

Mormon Life Education SamoaEducation,Samoa,Mormon Life
Comments and feedback can be sent to feedback@ldsliving.com