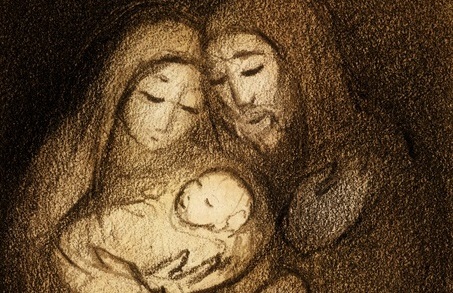 My favorite Christmas tradition growing up was celebrating Christmas Eve with my German grandma, who we called Oma. Every year, we would eat lots of good food that she lovingly cooked for us, unwrap her presents for her, and play music on a variety of instruments.

While those Christmas performances were often enthusiastic and heartfelt, the squeaky strings and piercing flutes couldn't rival my Oma's sweet rendition of "Silent Night" on her wooden recorder. And occasionally, she could get her three grandchildren to sing the German version of the beloved hymn, "Stille Nacht," as she played.

When we all got a bit older, I noticed the tears that would fill her eyes as she played her little recorder to the familiar tune. As she played, I'm sure my Oma remembered her Christmases in Germany and her beloved family, who had since passed away.

I love all Christmas music, but there's something special about the hymn "Silent Night." Not only does it have the ability to remind us of beloved family and Christmases past, it also reverently and peacefully testifies of the Savior's birth.

When I learned the history of the popular hymn, it made that testimony and those memories even sweeter.

Born to an unmarried mother, Joseph Mohr studied religion and music throughout his childhood under the direction of a vicar and music leader named Johann Nepomuk Hiernle. In 1815, Mohr became a priest and was assigned to Mariapfarr, Austria, for his first official duty—which happened to also be the town in which his father's family lived.

In 1816, the young assistant priest wrote the text of "Stille Nacht" in German. Living in difficult economic and social circumstances, Mohr wrote the text of the hymn following the Napoleonic wars, which meant shifting borders, economic depression, and uncertainty about the future.

Two years later, on Christmas Eve of 1818, Mohr brought the lyrics to schoolteacher and church organist Franz Xaver Gruber. Since many historians suppose that the church organ was not working, the original performance of "Stille Nacht" was accompanied by a guitar at the St. Nicholas church in Oberndorf, Austria.

Mohr was known for being a generous man. While many accounts differ on the history of the hymn's performance, records agree that Mohr was kind and generous—and from reading the text of his hymn, he clearly had a testimony of the Savior.

Following its initial performance, the tune became widely popular. "Silent Night" has been translated to over 100 different languages, and almost every Christmas album includes a rendition of the familiar hymn.

However, the incredible history of this hymn didn't stop there.

You may also be familiar with the story of the 1914 Christmas Truce of World War I, in which a group of German and British troops called an informal cease-fire in the muddy trenches of northern France for Christmas.

While historical accounts record shaking hands, exchanging gifts, and swapping stories, one soldier recorded that the first sound to carry across the trenches that Christmas Eve night was the sound of distant soldiers singing. Although the British soldiers couldn't understand the faint German words, they recognized the familiar tune—"Silent Night"—which caused them to timidly emerge and greet their fellow soldiers—not as enemies, but as fellow homesick brothers and sons who wished to be at home rather than in muddy trenches for Christmas.

I'm sure these soldiers were influenced by their own desire to be home at Christmas, but I can't help but think that the simple carol had something to do with the soldiers feeling a flicker of fellowship and peace.

No matter what situation you find yourself in, this powerful yet simple testimony of Christ's birth can help you feel the Spirit's sweet, peaceful presence each time you hear "Silent Night." Because of its reverent and simple testimony of the Savior, the hymn brings peace and joy whether in times of war, economic depression, or personal suffering.

Although my Oma no longer pulls out her recorder to play the beautiful melody at Christmas, I can feel the peace of the hymn each time I hear it and the joy of knowing that "Christ, the Savior, is born!"

Watch the powerful true story behind the most popular Christmas carol of all time in BYUtv's movie, Silent Night, available at Deseret Book and deseretbook.com.

Filmed on location in Austria, see what critics called, "An inspiring story of faith, hope, and perseverance."