To my fellow mothers of young children:

The fact is motherhood is hard. It is SO hard. It’s easily the hardest thing I have ever done. And lately I’ve looked around at all the people my age and younger expecting their first children with idyllic hope and blissful excitement and I’ve felt a jaded sense of, “You have no idea what’s coming your way, friend.”

But I was that same blissfully naive young girl less than six years ago. My oldest daughter was due on Christmas day and I had these idyllic visions of rocking my sweet newborn in the soft glow of the Christmas lights. I had no idea what was coming my way. I had no idea that she wouldn’t nurse, that I would literally hurt everywhere, or that her erratic sleep schedule would have me feeling literally afraid to fall asleep—that exhaustion would take over so completely that I would sob because “We have to keep her for 18 years!”

I remember a neighbor coming by and casually telling me that it was okay if I didn’t shower for the first couple of weeks, and I thought, “bless her!” and cried at the tiny moment of camaraderie I had found in my new, helpless state. I remember feeling completely unprepared, feeling scared, and feeling lonely after shifting from a full-time work and school schedule to a full-time mom schedule. I remember thinking I must not be cut out to be a mother as my baby cried and I cried and I had no idea what to do and wished I could just put her back in my belly.

One morning between the Christmas and New Year holidays after my oldest was born, my in-laws were staying with us. After a particularly difficult failed attempt at nursing, I walked down the stairs crying and handed my daughter to my mother-in-law. I had never seen my mother-in-law show excessive emotion and surely she, the mother of seven children and the ideal homemaker, would pass at least fleeting judgment as I momentarily quit to let myself cry. But instead of finding judgment in my mother-in-law’s gaze, that morning I was met with tears as she lovingly cradled my baby and said quietly, “it’s so hard.” That simple statement was worth more than a thousand words as I found empathy and love and understanding that momentarily melted all of my fears that I was failing and replaced them with a bond that I now shared with millions of women who had done the same things before me.

In the following weeks, I struggled with postpartum depression and kept it largely to myself, but the more I discussed the way I was feeling with friends the more I found that I was far from alone and that everything I had thought and felt had been thought and felt by at least one other woman that I trusted, respected, and loved.

And somehow we made it out of the newborn stage and onto the baby and toddler stages. Somehow we’ve added two more children and will soon add another to our little family. Somehow that screaming, purple-faced newborn who wouldn’t nurse sat at the dinner table and ate two helpings of chicken fried rice tonight after her fourth day of first grade, and somehow I still have no idea what I’m doing. Somehow this is still the hardest thing I’ve ever done every single day of my life.

► You'll also like: Motherhood Pics That Will Make You Laugh and Cringe at the Same Time

I’ve come to believe that in our age of Instagram and Facebook—in the age of the highlight reels we see and believe are other people’s real lives—we often fail miserably to share the brutal, heartbreaking, tear-filled truths of motherhood and it leaves us all feeling like our struggles and shortcomings are not things we have in common with one another when, really, we need to come to each other in those things vulnerably and readily. Of course, motherhood comes with amazing moments, with pride, love, and joy unlike anything you’ve ever felt in your entire life.

Yes, motherhood has moments so deeply rewarding and fulfilling that you are absolutely positive this is why you were put on the earth, and no, I wouldn’t trade my children for anything in the entire world. But in between those snippets of breathtaking beauty, joy, and happiness, there are equally breathtaking moments of fear, uncertainty, and frustration and they can feel entirely consuming. Those moments are unique to no one, though they come at different times, and I think we would do well to share those moments from time to time, to allow ourselves to be vulnerable and human in our motherhood and to reach out for help when we need it and offer support when we are in the position to give it.

One of my favorite quotes from one of my favorite people applies so perfectly here, though it was initially intended in more of a whole-life sense and less of a strictly-motherhood sense. Jeffery R. Holland once said, “If sometimes the harder you try, the harder it gets, take heart. So it has been with the best people who ever lived.” There are days when I feel like motherhood is eating me alive and, no matter how hard I try to do and be better, I just can’t seem to get ahead; how comforting, though, to know that so many others have gone before me and struggled similarly and yet have successfully raised incredible children. Even when we’re in the middle of it, we can offer empathetic love and support to those going through stages we’ve already passed through while simultaneously looking to those who have been through the phase we are struggling with; I am convinced that step by step and hand in hand is the way we were meant to survive this motherhood thing—we need each other to be real and vulnerable and flawed, not to put on our best airs of perfection and pass judgement even though we’re all already struggling with every single decision we make as mothers.

Someday those brilliant moments will shine so much more prominently than all of the difficulty that came between them as we recall the best—and quite possibly the hardest—days of our lives. And if we’re really lucky, even after all of our struggling and failing and shortcoming, we might get to be the best people who ever lived in the eyes of our children. But until then, I’m here struggling and, more often than we think, succeeding right along side you. 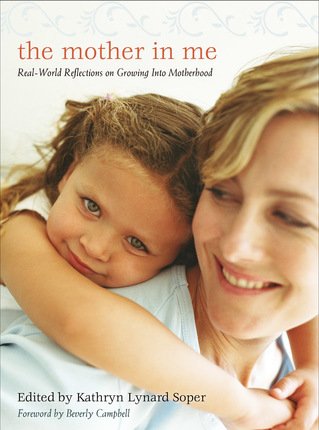 For more on the joys and challenges of motherhood, read The Mother In Me: Real-World Reflections on Growing into Motherhood by Kathryn Lynard Soper, available on desertbook.com.