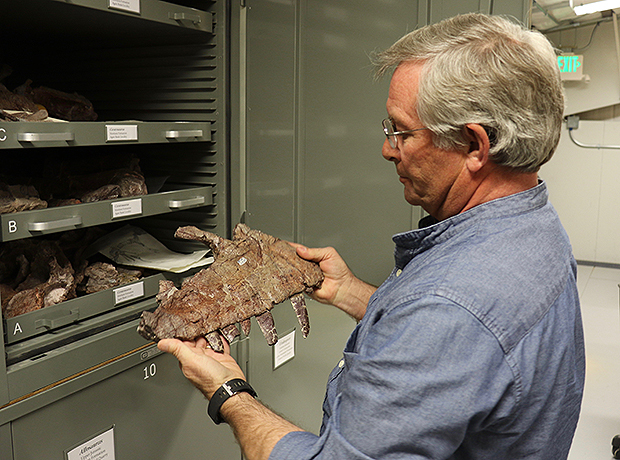 "God Is the Supreme Scientist": LDS Paleontologist Shares Why a Church-Owned School Digs for Dinosaurs

As featured in a recent LDS Living video, "Do Mormons believe in dinosaurs?" is one of the most googled phrases about Mormon beliefs. And although there's no doctrinal stand on the matter, here's what one paleontologist has to say about why he, and BYU, studies dinosaurs.

Curiosity and religious devotion can be shared attributes.

[Rod] Scheetz was 12 years old and already a rock hound in the early 1970s when he reached out to the "father" of BYU's paleontology program--James "Dinosaur Jim" Jensen. Young Rod had found what he believed were baby dinosaur bones near his home of Delta, Colorado. Impressed by the boy's enthusiasm (and correct assessment), Dr. Jensen invited him to take part in a local fossil dig.

"He Kept inviting [me], year after year, to work at the quarry--[I] loved it," said Scheetz.

The budding paleontologist eventually learned Jensen worked for the Church-owned BYU. Most of his team were returned missionaries. So he posed a question to his mentor: Why is a Church-owned school digging for dinosaurs?

"It's simple," Jensen answered, "we know why the earth was created; we just don't know how."

Makes You Think Byu Science CreationByu,Science,Creation,Makes You Think
Comments and feedback can be sent to feedback@ldsliving.com