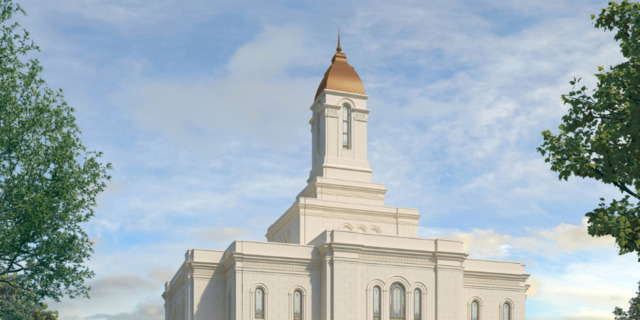 Why was the Tooele temple relocated? Here’s what we know

On Tuesday, January 19, 2021, the Church announced a new location and a renaming of a planned temple in Tooele Valley to the Deseret Peak Utah Temple.

“The First Presidency expresses gratitude for the faith and prayers of Church members in this area and continues to encourage all people to treat one another with kindness and Christlike love,” the statement read.

What prompted the temple to be relocated? Here’s what we know.

The temple was first announced by President Russell M. Nelson in addition to seven other new temples during April 2019 general conference. In September of that year, the original site was announced at the intersection of Erda Way and Highway 36 in Erda, Utah.

In April 2020, the Church released renderings of the temple. Bill Williams, director of temple design for the Church, noted that the design of the temple featured a cast stone exterior with copper shingles done in a pioneer style. Native flowers to Tooele Valley like cliffrose and silvery lupine will also be featured throughout the temple. 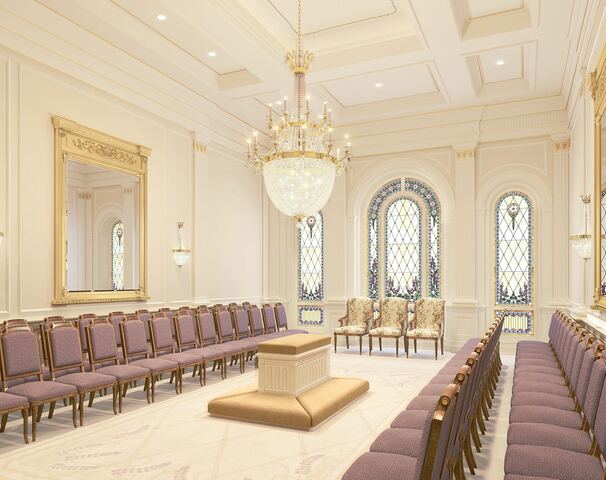 A rendering of a sealing room of the Deseret Peak Utah Temple. © 2020 by Intellectual Reserve, Inc. All rights reserved.

► You may also like: Renderings show first look inside the Deseret Peak Utah Temple

Then a month later, in May 2020, the Church announced plans for a residential community near the temple and released renderings of the community, as reported by Deseret News.

Just a few months later, on August 14, 2020, Deseret News reported that a possible referendum might delay the plan for the temple, noting that there were some opponents of the residential community that had started to gather petition signatures.

“They want residents to vote to overturn the plan to build 446 new homes because they believe the proposed housing density is too much for a rural valley where growth has become a major issue,” reporter Tad Walch wrote, noting more than 93 percent of residents expressed support in emails to the planning commission. You can read more, including comments from Tooele County Commissioner Tom Tripp, at Deseret News.

On August 18, 2020, the First Presidency released a statement withdrawing the plans for the residential community:

We acknowledge the efforts of those who have raised questions and sincere concerns about the Tooele Valley Temple project, including the residential development surrounding the temple. There is a sincere desire on the part of the Church to avoid discord in the community.

Therefore, regardless of the outcome of a pending signature-gathering effort, we have determined to withdraw our rezoning request for the residential portion of the temple project.

We look forward to working with local officials and community members to determine next steps to move forward with the construction of the temple. We hope those from all viewpoints on this matter will treat one another with kindness, civility, and Christlike love.

This week, Walch broke down not only what happened before the Church withdrew its plans for the residential community, but also afterward. In December 2020, the county commission, which had previously approved the construction of the temple and the residential community in June, reversed its decision and reapplied a farmland designation to the Church’s Erda property. You can read the full story in his weekly newsletter, ChurchBeat.

The new temple site is now located at an intersection west of 2400 North and 400 West in Tooele. According to the announcement, the designs will be the same as the previous renderings, a three-story temple of approximately 70,000 square feet. There will also be a new 20,000-square-foot meetinghouse on the site. 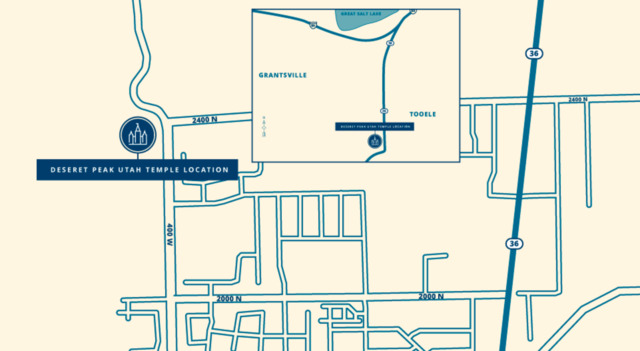 A map showing the location of the Deseret Peak Utah Temple. Map from Intellectual Reserve, Inc.

The name of the temple also changed from the Tooele Valley Utah Temple to the Deseret Peak Utah Temple. Deseret Peak is the highest peak in the nearby Stansbury Mountains with an elevation of 11,035 feet. 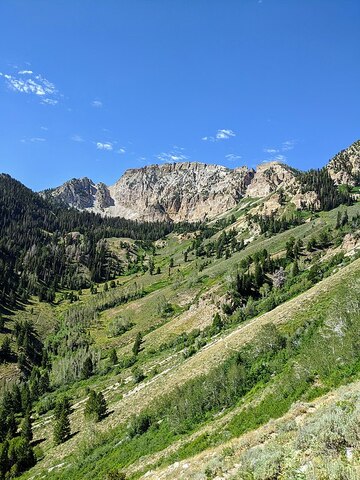 “They were trying to find the right place and I believe they did,” Winn told Deseret News. “I’m very thrilled that it will be in the city. This will be for all the people in this valley. We have waited and waited for this to come. It’s great news today.” You can read more of what the mayor said at Deseret News.

A groundbreaking date for the Deseret Peak Utah Temple has not been set. The following Utah temples are currently under construction:

In addition to the Deseret Peak Utah Temple, sites have been announced for the Syracuse Utah Temple and the Lindon Utah Temple, but construction has not yet begun. When all of the currently planned temples are completed, the state will have 25 temples.