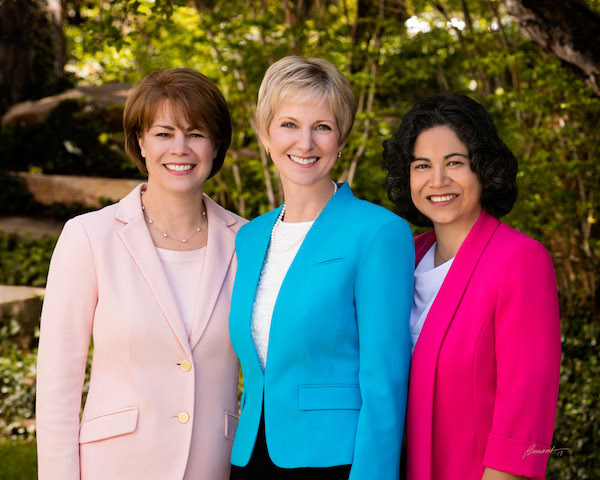 More than 5,000 questions were submitted to the general Relief Society, Young Women, and Primary presidencies by women around the world in preparation for the upcoming Sister-to-Sister Event on Friday, May 3. While many will be answered during this event and more will be discussed by Church leaders in councils to help provide better clarity and understanding, one was answered by the general Relief Society presidency at BYU Women’s Conference. The question read:

“As a mother of daughters and as a Young Women leader, I see the need more than ever before for women to understand how loved they are by Heavenly Father and that they have the same opportunities and blessings that their male counterparts do now and in the hereafter. . . . I would like to know how to answer some questions for my young single adult daughters, such as: 1) What does it mean for a woman to be endowed with priesthood power? 2) Do women access that priesthood power through keeping covenants or through someone else or both? 3) What is the before and after difference of receiving that power? 4) What is the Church teaching now about the priesthood and how it applies to women?”

While Sisters Jean B. Bingham, Sharon Eubank, and Reyna I. Aburto addressed each of these four questions in-depth, they also invited those listening to seek their own answers from the Lord to this and other soul-stretching questions.

1. What does it mean for a woman to be endowed with priesthood power?

“To endow is to enrich,” Sister Bingham explained. “When we are endowed with priesthood power it is an infinite source that constantly remains and can never be exhausted.”

She continued, “To be endowed means being given the gift of a quality or an attribute, and in this case, the gift of priesthood power that enables you to become more than you were before the gift was given.”

In conjunction with this rich meaning of endowed, a word that can help us better understand the priesthood and temple covenants, Sister Bingham clarified that “the priesthood is the eternal authority and power of God.” She said, “The purpose of priesthood power is, first of all, to help us access the grace and power of Jesus Christ’s atoning sacrifice to become more like Him and then to use what we have learned to assist others to progress on that same journey.”

This personal as well as outward journey can lead us to deeper revelation and can magnify “us to be more than we could be on our own,” Sister Bingham said. “Priesthood power is spiritual power used for priesthood purposes.”

In short, Sister Bingham taught that all the good that is done in the world is done through God’s power—His priesthood. When faced with such a daunting and incomprehensible understanding of what the priesthood is and our access to it, Sister Bingham gave some advice she received from Elder Robert D. Hales: “Don’t spend a nanosecond thinking about your inadequacies.”

But what does this knowledge mean to us as sisters? Sister Bingham shared a quote from Sheri Dew, a former counselor in the general Relief Society presidency: “What does it mean to have access to priesthood power? It means that we can receive revelation, be blessed and aided by the ministering of angels, learn to part the veil that separates us from our Heavenly Father, be strengthened to resist temptation, be protected, and be enlightened.”

2. Do women access that priesthood power through keeping covenants or through someone else or both?

Addressing this question, Sister Aburto shared, “Our covenants are like a mirror. They help us see ourselves but also our future—where we are now and also where the Lord wants us to go.”

Having this knowledge can bless women immensely, but Sister Aburto noted, “I always feel sad when I hear a woman say I do not have the priesthood in my home. . . . Be assured that a single woman or a woman whose husband does not hold a priesthood office doesn’t need to feel that she is cut off from priesthood power. . . . These sisters have access to priesthood power through their covenants and the faithfulness with which they keep those covenants can bless every member of their household. And while they will call on brothers who hold the Melchizedek priesthood office for blessings of health or comfort, they are nevertheless themselves a source of priesthood power for their own homes.”

In response to the marvelous strength women hold and the priesthood power they can access, Sister Aburto said angels cannot be restrained from becoming our associates.

Quoting President M. Russell Ballard, Sister Aburto shared, “Our Father in Heaven is generous with His power. All men and all women have access to this power for help in their lives. All who have made sacred covenants with the Lord and who honor those covenants are eligible to receive personal revelation, to be blessed by the ministering of angels, to commune with God, to receive the fulness of the gospel, and, ultimately, to become heirs alongside Jesus Christ of all our Father has.”

3. What is the before and after difference of receiving that power?

In tackling this question, Sister Eubank explained that people making good choices and dedicated to helping others in the world already have “godly power at work in” their lives.

However, she did note that this godly power can be magnified in three ways when paired with the priesthood power: 1) by knowledge, 2) by community, and 3) by allowing them to act in the Lord’s name through callings and assignments.

For an individual who gains deeper knowledge through the priesthood, Sister Eubank said, “She learns that she is literally the child of Eternal Parents and Their goal is to help them to eventually be like Them. She learns that Jesus Christ not only saves her from her own sins when she repents but He will share His enabling power to help her overcome step by step all her circumstances and limitations.” She continued to detail the powerful knowledge that comes from understanding the plan of salvation, eternal life and growth, and the prospect of being connected with loved ones who have passed on and blessing those who will come after.

“God grants us a gift of power, not only to help us accomplish His work but personal redemptive power that changes our natures,” she said. And through this, we are never alone.

“We draw strength and sisterhood from one another because of the Relief Society. We teach each other; we comfort one another; we accept one another, or at least we should. A worldwide sisterhood is a great gift of power,” she testified.

In demonstrating the way the priesthood can change lives, Sister Eubank shared how learning of the gospel changed her mother’s life. Though her mother was a kind and selfless person before making covenants, Sister Eubank says her dedication to her faith allowed her to pour her energy into making others’ lives better and gaining greater knowledge of the divine.

Sister Eubank also shared several passages from Doctrine and Covenants 121, which she nicknamed a handbook to accessing true priesthood power. “This is one of the most transcendent promises in all scripture,” she said. “It’s about priesthood and it is for all of God’s daughters and sons.”

In summing up the teachings from this powerful chapter of scripture, Sister Eubank said that priesthood power can’t be used to control others unrighteously. It can only be used to love.

She continued, “This is the power that Jesus Christ shares with us and I testify that it pours down on us like a mighty rain if we will turn our faces to it.”

4. What is the Church teaching now about the priesthood and how it applies to women?

“Part of the Lord’s current sharing of knowledge relates to accelerating His pouring out eternal truth on the heads and into the hearts of His people. He has made clear that the daughters of Heavenly Father will play a primary role in that miraculous acceleration. One evidence of the miracle is His leading His living prophet to put far greater emphasis on gospel instruction in the home and within the family.” –President Henry B. Eyring

“We are not accustomed to speaking of women having the authority of the priesthood in their Church callings, but what other authority can it be? When a woman—young or old—is set apart to preach the gospel as a full-time missionary, she is given priesthood authority to perform a priesthood function. The same is true when a woman is set apart to function as an officer or teacher in a Church organization under the direction of one who holds the keys of the priesthood. Whoever functions in an office or calling received from one who holds priesthood keys exercises priesthood authority in performing her or his assigned duties.” –President Dallin H. Oaks

“More regular time in the temple will allow the Lord to teach you how to draw upon His priesthood power with which you have been endowed in His temple. . . . My dear sisters, we need you! We need your strength, your conversion, yourconviction, your ability to lead, your wisdom, and your voices.” –President Russell M. Nelson

In citing these quotes, Sister Bingham acknowledged, “women are not ordained to the priesthood may be a source of frustration for some.” In answer to that frustration, she shared this quote from Sheri Dew:

“Sisters, some will try to persuade you that because you are not ordained to the priesthood you have been shortchanged. They are simply wrong, and they do not understand the gospel of Jesus Christ. The blessings of the priesthood are available to every righteous man and woman. We may all receive the Holy Ghost, obtain personal revelation, and be endowed in the temple, from which we emerge “armed” with power.12 The power of the priesthood heals, protects, and inoculates all of the righteous against the powers of darkness. Most significantly, the fulness of the priesthood contained in the highest ordinances of the house of the Lord can only be received by a man and woman together.”

Sister Bingham added her own testimony, saying, “Regardless of her circumstances, [a woman] is never without access to the priesthood power as long as she is keeping her covenants.”