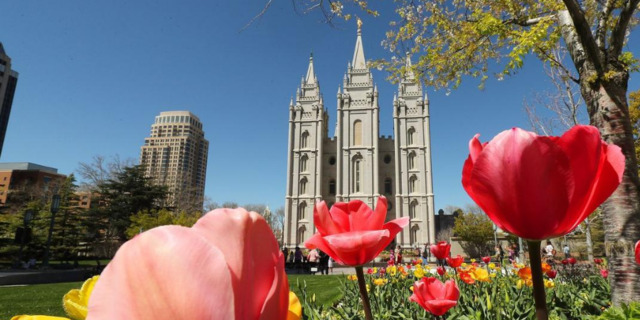 Women and temple work from ancient Israel until now

Editor’s note: The following sections are excerpted from 175 Temple Symbols and Their Meanings by Donald W. Parry and show how women’s involvement of temple work dates back to ancient Israel and how women continue to be more and more involved in temple work as the years go by.

The Old Testament sometimes focuses attention on the role of males in ancient Israelite temples, especially high priests, priests, and Levites. This focus sometimes creates misunderstandings, in our day, regarding the status of females in ancient temples; and too, occasionally we lack a clear comprehension regarding women in our modern temples. In recent years, however, a number of individuals have clarified many sacred truths regarding the elevated and significant position of women in Latter-day Saint temples. “All worthy members who have received their endowment and keep the covenants they have made in the temple have priesthood power,” wrote Barbara Gardner, an associate professor of Church History and Doctrine, Brigham Young University. “Thus, women, married or single, can have priesthood power in their homes regardless of a visit from a priesthood holder.”1

Sheri Dew, a former Counselor in the Relief Society General Presidency and author of Women and the Priesthood, wrote, “What does it mean to have access to priesthood power for our own lives? It means that we can receive revelation, be blessed and aided by the ministering of angels, learn to part the veil that separates us from our Heavenly Father, be strengthened to resist temptation, be protected, and be enlightened and made smarter than we are—all without any mortal intermediary.”2

The temple endowment provides powerful teachings regarding the ennobled position of women. Temple patrons learn about these truths, line upon line, as they take heed over the years and decades, and more significantly, as they receive instruction from the Holy Ghost, who confirms in our hearts and minds the honored standing of women in God’s kingdom.

During a devotional address, President M. Russell Ballard provided several foundational truths that aid us in comprehending the significant status of women: “When men and women go to the temple, they are both endowed with the same power, which by definition is priesthood power. While the authority of the priesthood is directed through priesthood keys, and priesthood keys are held only by worthy men, access to the power and blessings of the priesthood is available to all of God’s children. . . .

“The endowment is literally a gift of power. All who enter the house of the Lord officiate in the ordinances of the priesthood. This applies to men and women alike.

“Our Father in Heaven is generous with His power. All men and all women have access to this power for help in our own lives. All who have made sacred covenants with the Lord and who honor those covenants are eligible to receive personal revelation, to be blessed by the ministering of angels, to commune with God, to receive the fulness of the gospel, and, ultimately, to become heirs alongside Jesus Christ of all our Father has.”3

During general conference in April 2014, President Dallin H. Oaks added greatly to our understanding of women and the priesthood: “We are not accustomed to speaking of women having the authority of the priesthood in their Church callings, but what other authority can it be? When a woman—young or old—is set apart to preach the gospel as a full-time missionary, she is given priesthood authority to perform a priesthood function. The same is true when a woman is set apart to function as an officer or teacher in a Church organization under the direction of one who holds the keys of the priesthood. Whoever functions in an office or calling received from one who holds priesthood keys exercises priesthood authority in performing her or his assigned duties.”4

Beyond these teachings regarding women, there are several visual, but unspoken, particulars in the temple that also make us aware of the equality of God’s daughters and sons. Some of these have been identified by President Nelson: “In the temple, all are dressed in spotless white. . . . Through a democracy of dress, temple attendance reminds us that ‘God is no respecter of persons.’”

President Nelson continues, “Age, nationality, language—even position in the Church—are of secondary significance.” No preference is given to individuals from specific nations, no priority awarded to particular languages. Age does not matter! Young and old alike are equal. President Nelson’s next point is yet another remarkable insight: “I have attended many endowment sessions when the President of the Church participated. Every man in the room was accorded the same high regard that was extended to the President.” Men and women, regardless of their ecclesiastical status, all receive the same instructions during the endowment and are equal in the Lord’s house.

President Nelson then writes: “All sit side by side and are considered equal in the eyes of the Lord.”5 During the endowment, there are no hierarchical seating arrangements and there is no podium for ecclesiastical leaders. Females and males are fully equal. And then, at the conclusion of the endowment, males and females have equal access to the celestial room, which signifies the celestial kingdom.

► You may also like: The difference between priesthood power and priesthood authority (and how women and men can access both)

Women and the Ancient Temple

During the many centuries that the Mosaic Law prevailed in ancient Israel, only Aaron and his male progeny were authorized to enter ancient Israelite temples. Although women and men from the other eleven tribes could not enter the temple itself, they had other sacred privileges. With regard to Israelite women during this time period:

(2) Women donated jewelry (earrings, rings, bracelets, jewels of gold) for the maintenance of the temple and for the purchase of items to make the holy garments (see Ex. 35:21, 29).

(3) Women donated their mirrors, which were set in frames of brass, to the temple; the brass was utilized to build the laver of brass (see Ex. 38:8).

(4) Women spun textiles of blue, purple, scarlet and linen (see Ex. 35:25–26) for the priestly vestments as well as the curtains and veils.6

(5) A female could become a Nazarite, one who made sacred vows and was consecrated (Hebrew: Nazarite, “consecrated one”) before the Lord (see Num. 6:1–21). A Nazarite vow permitted non-priests to become consecrated and to have a role that is somewhat similar to that of a priest. At the conclusion of the period of the vow, the Nazarite was presented at the tabernacle, where she or he offered burnt, sin, and peace offerings (under the direction of a priest) together with a basket of unleavened bread and other items. The Nazarite then shaved her or his head at the door of the tabernacle, and burned the hair in the sacrificial fire.

(7) A woman could bring sacrifices to the temple (see 1 Sam. 1:24; Luke 2:24); and according to Rabbi Yisrael Ariel, women were “even obligated to slaughter the Passover offering, unless a family member does it instead. The women would accompany their sacrifices with prayer, confession, repentance, prostration and thanks to God for His kindnesses.”7

(10) According to ancient, non-scriptural sources, women sometimes entered the court of Herod’s temple to console others who were mourning, downtrodden, or seeking comfort at the temple.8

(12) It was a matter of dispute whether or not women could lay their hands on the heads of sacrificial animals (see entry “Hands, Laying on of, on Sacrificial Animals”). Some early rabbinic authorities argued on their behalf while others ruled that they could not do so.10

(13) Women participated in the Passover, including going to the temple as well as partaking of the Passover offering.

► You may also like: 6 commonly misunderstood facts about women and priesthood power

From Moses to John the Baptist (for more than a millennium), only a relatively few Israelites were authorized to enter the temple, with its holy place and Holy of Holies. In fact, only males, of a certain age, of a single family (Aaron and his male descendants), of a single tribe of Israel (Levites), could enter the temple. In total, a very small percentage of ancient Israel were permitted to enter the temple during this period of time. Furthermore, only those same relatively few Israelites were permitted to participate in various temple rituals, such as washings, anointings, and wearing the sacred vestments. Members of the other eleven tribes—both males and females—were not permitted to enter the temple, nor were they permitted to participate in temple rituals or wear sacred vestments. Males and females of the other tribes were restricted to the temple court.

Why such restrictions on who was permitted to enter the temple and participate in temple rituals? After the Lord brought ancient Israel out of Egypt with great power and many miracles, He declared, “ye shall be unto me a kingdom of priests, and an holy nation” (Ex. 19:6). Kingdom here deals with kings and queens and priests pertains to priesthood. Note that Hebrew masculine plural nouns may also pertain to females (sometimes, the masculine plural is used when both males and females are present). Thus the plural priests (Hebrew: kohanim) is also relevant to females. But Israel rejected the eternal blessing of becoming a “kingdom of priests”; rather, “they hardened their hearts and could not endure [God’s] presence. . . . Therefore, [the Lord in his wrath] took Moses out of their midst, and the Holy [Melchizedek] Priesthood also; And the lesser [Aaronic] priesthood continued . . . which the Lord in his wrath caused to continue with the house of Aaron among the children of Israel until John” (D&C 84:24–27).

Things changed after John the Baptist, and again with the Restoration of the gospel through the Prophet Joseph Smith. Now, in our dispensation, all worthy women and men are authorized to enter the temple equally! Also, women and men engage in rituals such as washings and anointings, and they wear sacred vestments. Both men and women have priestly roles, pray at the altar, and enter various holy places in the temple. Women, together with men, now participate fully in the rituals, covenants, and ordinances. When they do so, they are exercising priesthood power, as President Russell M. Nelson clarified while speaking to the women of the Church: “When you are set apart to serve in a calling under the direction of one who holds priesthood keys—such as your bishop or stake president—you are given priesthood authority to function in that calling. Similarly, in the holy temple you are authorized to perform and officiate in priesthood ordinances every time you attend. Your temple endowment prepares you to do so.”11

In our dispensation, the Lord’s desire that His covenant people become a “kingdom of priests” is in full effect. John’s statement, the Lamb “hast made us unto our God kings and priests: and we shall reign on the earth” (Rev. 5:10; see also Rev. 1:6; 20:6), also applies to us, as does Peter’s: “Ye are a chosen generation, a royal priesthood, an holy nation” (1 Pet. 2:9). Joseph Smith’s words speak to women and men: “Those holding the fullness of the Melchizedek Priesthood are kings and priests of the Most High God, holding the keys of power and blessings.”12 And also, “men may receive their endowments and be made kings and priests unto the Most High God.”13

With 175 separate entries, this volume explores a variety of these rich symbols and truths regarding ancient and modern temples. Listed in alphabetical order for convenient references, the entries deal with a broad range of categories, including temple architecture, rituals and ordinances, sacred clothing, sacrificial offerings, geometric symbols, colors, heavenly bodies (sun, moon, stars), prayer and revelation, sacred names, religious festivals, and more. This thorough yet accessible collection allows each of us to gain a greater understanding of valuable symbols, enriching our temple experience and giving each of us a clearer vision of the many ways our temple worship points us toward Jesus Christ.  Available now at DeseretBook.com.