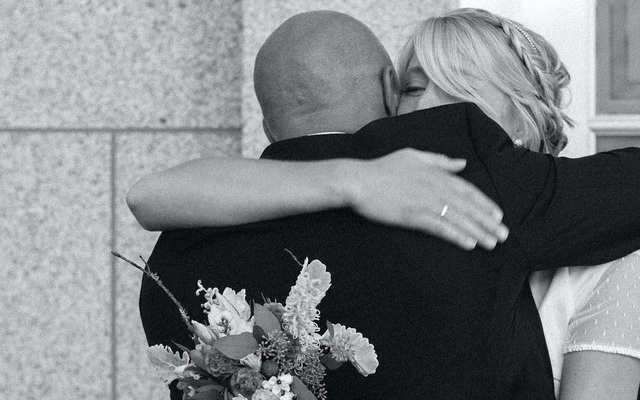 Rio Grange grew up proud to be her father’s daughter but as she became older, her father’s decisions and “the demons” he faced ultimately tore her family apart. On this week’s episode of All In, Grange opened up about what she has learned from personal experience regarding honoring parents even when they make choices that are contrary to what they themselves may have taught.

On Instagram, in conjunction with the episode, Grange shared the following:

Unfortunately as the years went on, my dad continued to make choices that made it harder and harder to trust the materials I’d borrowed from his foundation to build my own. I worried that the lessons he taught, the values he engrained, and the beliefs he shared would turn to dust and lose validity with every choice he made contrary to it all. But because I had already began building my own foundation and my own understanding, I knew they could remain intact while I let the rest go—the choices I didn’t understand, the questions left unanswered, the pain that still lingered, and the parts of him I couldn’t change—I left it all at the Savior’s feet because that was the only thing I knew to do.

We are grateful to Rio for sharing such a personal experience and feel honored to be able to share her story.

Listen to the full podcast by clicking here or by listening in the player below. You can also read a full transcript here.

Rio Grange: It's a really tricky thing when the child has clarity that maybe the parent does not. And that's a hard position to be in. And that's what I learned—that a lot of other people have found themselves in similar situations when they see their parent make these hard choices, because we've been raised by that person and … it's just very confusing to suddenly see that not met in a person you have looked up to and you wonder, “But you taught me this, now why am I seeing that?”

So for a kid to have an example of such good and such light and devotion to God, and then yet such disappointment or sin—for that to be in the same person was very hard for me to wrap my head around as I kind of grew up and became an adult and started to understand the weight of these decisions that became harder and harder.

But…when you ask, “How do I honor my parents despite that?” I had to honor his journey. I had to honor his story—that I was never going to be the one that was going to change him. As much as I hoped and I prayed that I could be the one, it was never going to be enough. It was a battle that he was facing, that only the Lord could fight with him because it was bigger than all of us. And I needed to honor that process, which was his process and his alone, knowing that if I stepped in, I was going to harm the relationship that we did have. And I valued that way too much.

I learned–and you know, I learned the hard way. There were seasons where I would kind of stand up against him. And he was intimidating to say the least. Despite his love for his children, it was intimidating. He was a man [who] could articulate his thoughts very well, and so it was scary to go up against. And when I did, I just–I don't know, I felt like it was kind of divine realization every time that it was just like, “This battle isn't yours to fight, it's his.” And if you can separate the two, he can be the Dad you need him to be for that time that you have with him.

And so, I kind of had to choose that over and over. And I didn't quite know what that meant. But I just chose that relationship with my dad over anything else. So I think to honor him, I took the good that I learned from him, from the family home evenings and the conversations on the lift rides, and the post-date talks on my bed. I took all of those good things and I built my own foundation that was independent of his choices and the choices of anyone else.

Because that's how I could honor him—by taking those best parts and the parts that I knew were true and that I knew were honest and that I knew were real—and build upon those to create the solid ground I stand on today. Otherwise, my foundation would have crumbled with the loss of him. And I wouldn't have that. But because I kind of learned to compartmentalize and separate and build my very own testimony that had bits and pieces of his, it could stand the blow of losing him and the betrayal that his choices did cause, if that makes any sense. Man, it's hard.

Morgan Jones: It makes perfect sense. Before we move on, I was wondering as you're talking, do you have any other thoughts for adult children whose parents may be going through a divorce? Are there any lessons that you learned from that, that you think might be helpful?

Rio Grange: That's a great question. I'd love to sit with that one. Because I think that's another topic with complexities of my relationship with my dad. I think divorce is one that is talked about, but it's talked about on a very surface level because of how case by case it can be. And so it's hard to address because there's so many sides . . . so many variables to it. I think during this experience with losing my dad and even also seeing my parents’ divorce before that, I quickly learned how crucial a sibling relationship was, despite the fact that we are all very different. My sisters and I, and my brother, we're all very different. And we certainly mourned in different ways. And we all had a very different experience with the divorce because it happened at very different points of all of our lives, given our ages.

But I learned how crucial it was to . . . if anything were to stay intact, it would be those sibling relationships. Because when there are times that I felt alone, or that I did not think anybody understood what could possibly be going through my heart and mind, besides the Savior, I always turned to my siblings knowing that if anyone did, they do. Because they [also experienced] of this kind of confusing unfolding of events—both the divorce and the passing of my dad. And so, I leaned on them and we each allowed space for each other to deal with these different chapters in our own way.

And we didn't let that come between us. If one needed to be more angry at the situation, we let that [happen]. And we left space for that and didn't let it get between us. And I think because we did that, we always came back to each other because we recognized that—in a heavy and such tender experience as this was, and that I know so many go through—there is no emotion that's not allowed to be felt. And so, we allowed that in each of us. We created this space where we could just dump everything that we couldn't say to our parents or to our parents’ siblings, or to people that felt like were on one side or the other, we were the kids that were stuck in the middle a little bit. So it felt like we kind of had to really stick together because that's a really unique space to be in. And yeah, I had to cling to those sweet relationships. And I still do.

This workbook was designed to guide you in preparing your hearts and homes for the timely messages of general conferences and engage in the words of our leaders. Through prompted note pages for each address you are invited to actively listen as you record personal revelation and meaningful impressions in a beautifully designed space that will encourage you to revisit your notes often. After the conclusion of conference weekend, it will guide you to reflect on overall themes, recurring promptings, and set goals to act! This workbook will become an essential tool and blessing to you as you capture the inspiration of general conference and welcome the teachings into your daily life! Find this workbook along with the children's workbook here.