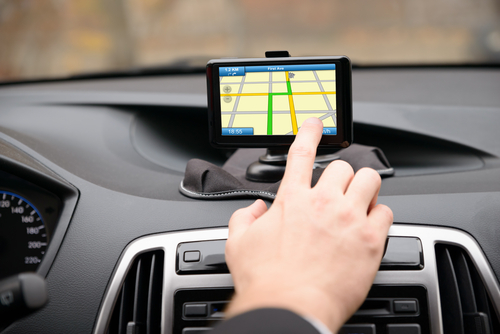 Youth Theme Insight: The GPS That Christ Gave Us to Show Us the Way Home

Maps are awesome. I mean, think about it: someone with so much more knowledge and experience than us took the time to measure, calculate, and draw the terrain and roads. They added towns and cities, miles and landmarks, and roads of all kinds. They even added the N on top so everyone else in the world—who isn’t my husband—can know where north is. Through their efforts, they have unlocked a world of driving and destinations for me. Because of them, I don’t have to be lost (as much). Because of them, I can know exactly how to get where I want to go.

And now, because of the GPS map system on my phone, it’s as easy as “Hey phone, how do I get to Disneyland?” and I’m given step by step directions by some guy with a British accent who doesn’t judge my driving. It. Is. The. Best.

I like to think of the commandments like maps. You might think that’s a stretch. You might, like many others, look at commandments like they are rules—a list of things you can’t do or have to do. In fact, I remember having some of these same feelings when I was a youth. What do you mean I can’t date before I’m 16? And why can’t I watch that one movie? It’s not that bad.

Then there were times when I allowed myself to believe the arguments of other people around me who said that all the rules we had in our Church were “suffocating" and that the Church didn’t want me to think for myself. And my least favorite, when some people said they felt sorry for me because of all the fun I was missing out on. So, yeah, there were times when the commandments seemed not only not-cool but restrictive.

As I grew older I began to really listen to and choose to believe what my parents and Church leaders had taught me all along—that commandments weren’t things to hurt me but to help me. I began to realize that commandments didn’t keep me from being happy; they showed me the way to be happy. They became a positive thing in my life, not something I hated.

Imagine what it would be like if I hated my GPS. I mean, what if I were driving to Disneyland and the British voice tells me to take the next exit? What if I was like, “Hey, don’t tell me what to do! It’s so restricting!” and then kept driving. In addition to my children erupting onto a potentially violent revolt in the back seat, I’d probably end up somewhere completely different from where I wanted to be. Between my directionally-challenged mind and the safety of my kids, I can honestly say that maps—and commandments—have become my friends.

And what is our eternal destination? It’s kind of two-fold.

First, we want to return to Heavenly Father. Our spirits long for home.

When I was around 17, I watched the original version of Saturday’s Warrior. Yes, super cheesy but I loved it. In it, one of the characters said something like, “Can you be homesick for a place you’ve never been?”

Aside from the struggles I’d had with self-doubt as a teen, I also had a feeling that something was missing. Or, more aptly put, that I was missing something. Her question slammed through my ears into my heart. I was homesick for heaven. There was a part of me—my spirit—that longed for home.

This was a revelation to me. I mean, I’d always been taught that we lived before we came and we all passed through the veil of forgetfulness on our way to earth. But this was the first time that that felt really real to me. It was like there was a part of me that somehow snuck around the veil, that remembered what it was like, what it felt like, and wanted to feel it again—to be there again. Though I wasn’t and still am not in a hurry to leave this life, it is my goal to return back home to Him when it is time. He wants me back, too. He wants us back. So much so that He has shown us how to get home. He has given us the map, the GPS, the directions on how to return to Him.

If we compare it to my map app on my phone, the voice that tells us where to turn is like the voice of our prophet and leaders, sending us audible direction we can clearly hear. The GPS is the Holy Ghost, keeping us connected to God, always letting us know exactly where we are in His eyes. The map is the plan of salvation—it shows us where we’ve been and where we want to go. And the roads, the way we get there, are the commandments. They are lines and lanes with pavement and purpose.

Second, we need to follow the road to our heavenly home.

The commandments take us safely through the terrain of this life and lead us back to God. It is a journey of a lifetime. But it’s up to us to want to. In fact, Elder Dieter F. Ucthdorf said that the commitment to keep the commandments must come from us. “That is your sole burden, your sole privilege,” he said. Then he said my very favorite thing: “This is your great adventure.” And it really is!

► You'll also like: One of God’s Hardest Commandments We Rarely Think of

The other eternal destination is more like an eternal condition. It’s more than where we end up, but who we end up as. I’ve often wondered, “If the whole idea of this life is getting back to God, then why did we leave Him in the first place?” That seems like a lot of effort, doesn’t it? That’s like leaving a room just so you can walk back into it. Isn’t there a purpose?

Yes! The greater purpose is that through the choices we make in life—through the roads we choose—we can become like our Father in Heaven and Jesus Christ. We can change and grow, learn and transform into our best selves. To me, it’s not about becoming perfect in all that we do, but it’s about becoming capable of loving and living life to the fullest, and we can only do this with God’s help and by following His way.

President Ezra Taft Benson once said that “when obedience ceases to be an irritant and becomes our quest, in that moment God will endow us with power.” What kind of power?

·      The power to love unconditionally.

Now that is a lot of power! As we follow the commandments and stay on the road leading back to Him, we not only move closer to Him, but He gives us the power to become like Him. On this roadmap to home, the gospel is the vehicle and we are the precious cargo inside. The straight and narrow path is not just aimed at our eternal destination; it’s also designed to straighten each of us out as we travel home.

Remember: We are the because. Everything our Father and the Savior have done have been for us. They want us to be like Them so that we can feel what They feel and love like They love. The only way to have the fullness of joy is to reach the fullness of our potential—and that is to become like Them.

Now, don’t get overwhelmed. Nowhere have I said you need to be perfect. You don’t. You won’t. Not in this life. No matter how hard you try.

The good news is that you don’t have to be perfect right now. You just have to try to be good, to stay true to the covenants you’ve made. And you do this by keeping the—you guessed it—commandments.

Commandments aren’t rules to hold you back. They are the roads to lead you to the ultimate happiness. And the cool thing (as if it can get any cooler) is that you don’t have to wait until you reach the end to be happy! So much of what God promises when you are obedient He is ready and willing to give to you now. Personal revelation, gifts, blessings, His hand working in your life—the road to home and Him, paved by the commandments, take us to pitstop after pitstop of wonderful things in this life.

► You'll also like: How My Mission Taught Me It’s Possible to Be too Obedient

I want to get real here for a second and talk about the adversary. He is honestly the worst. His sole purpose is to keep you from returning home and reaching your potential. He wants you to be miserable and knows just what to do to get you there. He is very tricky in his efforts to get us to sin. And honestly, some sins look like they aren’t too terrible. Maybe even fun. He’s perfected the art of illusion.

But he is wrong.

When we keep the commandments, God will prosper us in our land (see Alma 48:15). That means God will give us blessings now. He will always give us the things we need to have growth and joy now. But it’s up to us to want them and receive them—even if they aren’t what we expected or hoped for. I think it’s important, though, to note that He won’t always give us the things we want, because, let’s be totally honest, some of the things we want aren’t what we need. And thank goodness He knows the difference!

When we keep the commandments, we will be saved. Abinadi testified of this. In fact, it was one of the first things he said to King Noah and his wicked priests (see Mosiah 12:33). That’s how important it is.

And the commandments are the how.

How great is that?