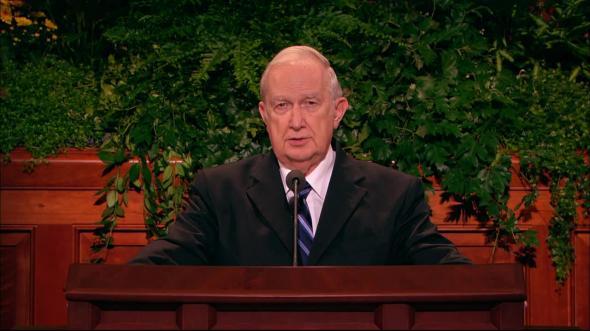 Elder Richard G. Scott passed away this afternoon at 86 years of age. Though we're saddened by his death, we're sure that there was a happy reunion in paradise today. Here are three things we'll always remember about Elder Scott:

His Love and Compassion

Though all of the Apostles share a sacred mission to preach the gospel “among all nations, kindreds, tongues, and people” (D&C 112:1), they fulfill it in different ways. President Monson tells stories. Elder Oaks makes lists. Elder Scott’s distinctive speaking method, though subtle, was reflective of his personality and attitudes toward the gospel.

During the Savior’s mortal ministry, He came across a group of people who were struggling both physically and spiritually. “When He saw the multitudes,” the scripture reads, “He was moved with compassion on them” (Matthew 9:36). This Christlike compassion was beautifully exemplified every time Elder Scott spoke. His preferred approach was not to orate loudly or forcefully, but simply to empathize and plead—plead with church members to pray, to change, and to come closer to Christ.

Elder Scott’s remarks always conveyed a powerful focus on the Savior and His Atonement, prayer, repentance, and the core doctrines of the plan of salvation. “It is a fundamental truth that through the Atonement of Jesus Christ, we can be cleansed,” he said. “Don’t live your life in despair, feeling sorry for yourself because of the mistakes you have made. Let the sunshine in by doing the right things—now.”

His Focus on Principles

“As you seek spiritual knowledge, search for principles,” Elder Scott counseled. “A true principle makes decisions clear even under the most confusing and challenging circumstances.” This concept, a key focus of Elder Scott’s teachings, was the subject of his brilliant 2013 book 21 Principles: Divine Truths to Help You Live by the Spirit. A few of its notable excerpts include:

“The scriptures teach, and I have been led to confirm, that we will never be prompted by the Holy Ghost to do something we cannot do. It may require extraordinary effort and much time, patience, prayer, and obedience, but we can do it.”

“Adversity is a part of life. We will all have it because we need it for growth and for the forging of our righteous character.”

“The Spirit has taught me that Satan doesn’t have to tempt us to do bad things—he can accomplish much of his objective by distracting us with many acceptable things, thus keeping us from accomplishing the essential ones.”

“It is important not to judge ourselves by what we think we know of our own potential. We should trust the Lord and what He can do with our dedicated heart and willing mind.”

His Relationship with Jeanene

Paul, one of the early Christian apostles, instructed the Ephesian husbands to “love [their] wives, even as Christ also loved the church” (Ephesians 5:25). As Paul’s modern-day counterparts, it’s to be expected that members of the Quorum of the Twelve Apostles would live this counsel. None of the brethren have been shy about the love they share with their eternal companions—but perhaps the most touching words and displays of marital affection ever delivered by an apostle came from Elder Scott.

Elder Scott married his beloved wife, Jeanene, in 1953. Through their lives together, they shared a remarkably strong bond that Elder Scott became known for frequently addressing in his general conference talks—particularly following her death in 1995. He often reminisced on the peace and serenity of their marriage. “We have not had arguments in our home or unkind words between us,” he said in a talk. “Now I realize that blessing . . . resulted from her willingness to give, to share, and to never think of herself.”

Though Elder and Sister Scott sailed over heartbreaking waters during their marriage (two of their children passed away within six weeks of each other), they provided one another with support and comfort—an ideal he often encouraged all Church members to strive toward. Indeed, Elder and Sister Scott touched the hearts of all who heard him speak with their beautiful example of marital joy. When Sister Scott departed from the earth, Elder Scott tearfully proclaimed, “I am confident that when . . . I see her again beyond the veil, we will recognize that we have become even more deeply in love.”

While Church members will undoubtedly be saddened at the news of Elder Scott’s passing, we also confidently look forward to the day when we meet this beloved apostle again.