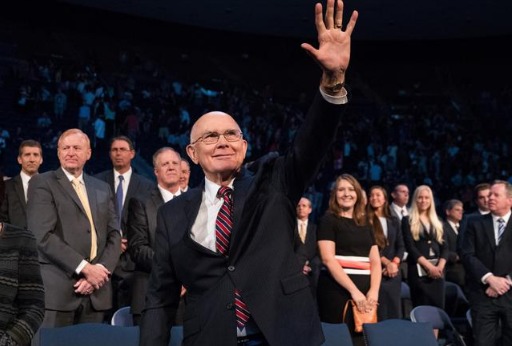 At an address at BYU, Elder Oaks unflinchingly addressed the "current ugliness" of the political arena as well as the ugliness that spreads online. During this address, he gave some timeless counsel for Latter-day Saints as elections approach.

“Today, I say that if the Church or its doctrines are attacked in blogs and other social media, contentious responses are not helpful. They disappoint our friends and provoke our adversaries,” said Elder Dallin H. Oaks of the Quorum of the Twelve Apostles of The Church of Jesus Christ of Latter-day Saints during an address to students at Brigham Young University. The Mormon apostle was the devotional speaker in the Marriott Center on the Provo, Utah, campus Tuesday, September 13, 2016.

Elder Oaks began his remarks by speaking about the national and local elections that are just around the corner on November 8. “This audience includes thousands who will soon have their first opportunity to vote.”

“The few months preceding an election have always been times of serious political divisions, but the divisions and meanness we are experiencing in this election, especially at the presidential level, seem to be unusually wide and ugly,” he expressed.