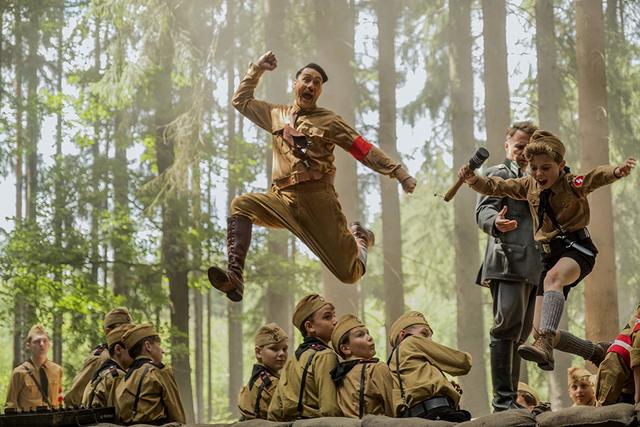 This is a very ambitious and dangerous film at the same time. It’s an irreverent look at the Nazi Browncoats during World War II and is intended to be a coming-of-age satire on hate. Without understanding that, you will be offended. Director Taika Waititi’s comedic perspective walks a very thin line with some extremely inappropriate and disturbing images, jokes, and situations. There is some danger in laughing at antisemitism, and I have mixed feelings about how one of the absolute darkest moments in human history is handled.

All that being said, at the end of the movie, I had a smile on my face and was impressed with the bold movie I had just endured. One of the best indications that a movie is good is that it makes you feel and think. Another result of a good movie is that it gets people talking. So, does that mean this is a good movie? Great question. This movie is definitely not for everyone. Viewer beware.

The first two minutes are a bit alarming when you see a young boy pledging his life to the “savior” of Germany, Adolph Hitler. From there, it gets even worse and I almost stopped watching the movie. I’m glad I remained seated, though, because the last act was so powerful.

Taika Waititi does a great job playing a ridiculous Adolph Hitler. Good for him for writing, directing, and acting in his own movie. Because he is actually Jewish, he stated that playing Adolph Hitler was great revenge. Taika Waititi also directed Thor: Ragnarok, if that gives you an idea of how flippant his humor can be in this film.

The acting is very good. Roman Griffin Davis is fantastic as JoJo. Wow, what a little powerhouse of a young actor. Thomasin McKenzie is also great and perfect in her role. I thought she was really special in Leave No Trace, too.  I really liked Scarlett Johansson’s character. I thought it was one of her strongest performances. Sam Rockwell is always wonderful and completely entertaining. He has two very powerful moments in the film. Alfie Allen makes a very good closeted, gay Nazi.

There are some very powerful moments. The tone really changes, though. Act 1 is a ridiculous, slapstick satire, yet Act 3 takes a very dramatic turn. It reminded me of the similar transition in the excellent WWII movie Life Is Beautiful. That movie left me speechless.

There’s also an inconsistency of accents. All of the characters are supposed to be German, but some people speak with a German accent, others with a British one, and then there’s Rebel Wilson who can’t quite do anything without her signature Australian accent.

The character development isn’t as strong as it should be, considering the story and theme. JoJo tells a lie in the beginning of the movie, as well as at the end, so did he really have any character growth? Would he have been as kind to Elsa if she weren’t pretty? Would he have still followed Adolph if everyone else was, too?

Why would a parent allow his/her child to be indoctrinated with twisted Nazi dogma when they know better? For more insight on how Germans dealt with the changing ideology in their country during WWII, a movie I recommend is The Book Thief.

There is a lot of witty dialogue. The audience I watched the movie with was laughing so hard I often couldn’t hear all of the lines. You feel uncomfortable and guilty if you laugh at most of the jokes. If you love Mel Brooks’ humor and approach to world history, you’ll probably enjoy this movie. As an American, I didn’t like how the American soldiers were portrayed and question the accuracy of what happened in the film during a couple of scenes.

Just because this movie is rated PG-13 does not necessarily mean your children should watch it. Some things to take note of:

Here are some uplifting quotes and themes from the movie: